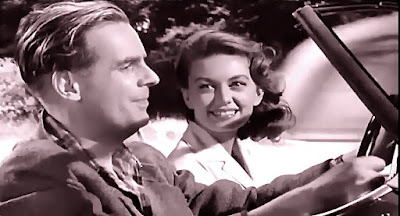 Let us rejoin Buddy Best, fair-to-middling film-maker, as he drives home the fair and talented actress Cordelia, daughter of that ham actor Buddy refers to only as “the Ancient Mariner”, who has absconded on a vacation in Brittany with Buddy’s wife, the middling-to-fair actress Joan...

(Click here to read our previous embarrassing episode, or click here to read the first chapter of this “merciless exposé of the vile mores of contemporary Hollywood” -- (J.J. Hunsecker, in The Catholic Standard & Times.)

On Venice Boulevard, visor down against the setting sun, windows open --

“So where’s this dance class?”

“Okay. You just want to go home then?”

“Yeah,” she said. “That pizza made me sluggish.”

She had her sunglasses on, and she stared straight ahead.

He pulled up in front of the Mariner’s house. He looked at her. She unbuckled her seatbelt, but then she seemed to be thinking about something. He waited. She took her sunglasses off and hooked them onto the front of her dress. Then she looked at him and said, “Turn the car off and let’s just sit here a minute.”

“You taste like pizza and Diet Coke and cigarettes,” he said.

“This Joe guy said not to get my hopes up because he couldn’t say, but he did ask me if I was available to fly up to Canada tomorrow night if he did cast me.”

“So maybe I’ll be going to Canada tomorrow.”

Her hand was still there.

She pulled her hand away and gave him a little rap on the chest.

“Buddy, I told you I can handle him. I’ve had weirdo dudes hitting on me since I was thirteen. I attract weirdos,” she said. “But I appreciate your saying something.”

She settled into him again, her head on his shoulder, her hand maybe unfortunately again on his thigh.

“I don’t suppose you have an agent?” said Buddy.

“All right. Look, if Joe offers you a part, ask him what he’s going to pay you, and before you agree to anything, give me a call.”

He put his hand on her thigh.

She lifted her head up.

They kissed again. He slid his hand further up her thigh and under her dress. He kept going. Her hand tightened on his thigh. She moaned into his neck. All right. Okay. This was insane, but so what. Sometimes, no matter how incredibly stupid it was, you really just had to say fuck it all, you only live once, damn the torpedoes, full speed ahead and go for it.

But then a cab pulled up and parked about six feet in front of them. The Ancient Mariner got out on the sidewalk side and Joan got out the other side. The Mariner had his beret on.

Buddy took his hand out from under Cordelia’s dress. She pulled her face away from his neck and looked at him.

“Why’d you stop?” she said, and then she turned and saw. “Oh, God,” she said. She sank down. “Oh God,” said her voice, coming up from under her head, which was pressed against his lap, which was the last place on earth he wanted her head to be at this juncture.

The taxi driver had popped his trunk from inside the cab, and now he came out to help the Mariner with the luggage. Joan had now noticed Buddy’s car and Buddy in it, and she stood there staring at him.

“Cordelia, get up,” said Buddy. He put his hand on her head.

“No,” said the voice, out from under all that thick dark hair swirled out over his lap.

The Mariner was looking at Joan. He followed her gaze, saw Buddy, and did a pantomime of someone being struck by a lightning bolt.

Joan walked toward Buddy, marching faster with each step.

“Buddy,” she said, loudly, as she marched, “are you stalking me?”

Now she was almost at the driver’s window.

“Are you fucking stalking me?”

She was leaning over outside his window. She looked in, then she screamed and staggered back as if she’d been shot in the chest.

The bold Mariner still hung back by the trunk of the cab. The driver, who had been pulling out luggage, stopped what he was doing and watched the crazy white people.

“Joan,” intoned the Mariner, dropping down an octave.

Joan had a new leather bag hanging from her shoulder. She opened it, stuck her hand in it, and pulled out her cellphone.

“Joan,” hailed the Mariner again. “What are you doing?”

Buddy could hear and feel Cordelia laughing now, and sobbing. She was gripping his right thigh, and her tears were wetting the crotch of his pants and his rapidly shrinking erection.

Which there was, and she stepped forward as the car drove past.

“I’m having you arrested, Buddy Best, you and that whore whoever she is.”

Cordelia let out a big “Oh! Fuck! Fuck this,” sat up, struggled with the door handle on her side -- neither sobbing or laughing now, but breathing quickly -- got the door open and jumped out without closing the door. She ran a couple of steps toward the Mariner’s barn and Buddy yelled, “Wait! Cordelia!”

She stopped and turned. He held out her red backpack. She staggered back to the car, leaned in, grabbed the pack, and then, still leaving the car door open, she ran toward the house again.

She was backing up into the road again, her hands together in a praying position.

Shocked and pretend-shocked as she was she nonetheless stepped forward again to let another car go by.

The Mariner got tired of being upstaged and now he approached Buddy’s car from the passenger side. He came around the open door and bent over to look in at Buddy.

The taxi driver had gone back to unloading the baggage onto the sidewalk.

He was leaning down, but not close. Not conveniently close enough for Buddy to give him a quick pop on the nose.

Joan marched back to the cab. The driver closed the trunk and stood there hoping to get paid. Joan turned and yelled:

Still bent over, the Mariner turned to look at her, and then turned back to Buddy. He looked like he had frozen up on his next line.

The Mariner quivered slightly but didn’t change his basic position.

“Stephen! I told you to come here!” yelled Joan.

The Mariner straightened up, still quivering, and, without shutting the door, he started walking back towards Joan and the luggage. Fuck him.

Buddy slipped over and pulled the door shut. There was Cordelia over there on the porch of the Mariner’s house, hunched over and rummaging in her backpack, her hair obscuring her face. Finally she drew out what would be her keys, she unlocked the door, opened it and went inside, slamming the door behind her.

Buddy took his glasses off the dash and put them on. Cordelia had forgotten her sunglasses, oh well. He buckled on his seatbelt, started up his car, checked his rearview mirror, and pulled the fuck out of there.

(Continued here, because things only get worse from here on out.)

(Kindly go to the right hand column of this page for a rigorously up-to-date listing of links to all other published chapters of Uncle Buddy’s House™; a Quinn Martin Production, starring Brian Keith as Buddy; featuring Anjanette Comer as Cordelia, and guest-starring Sebastian Cabot as the Ancient Mariner and Julie London as Joan.)

So funny! And the last couple of videos have also made me laugh, this one especially. Poor Cordelia.

Aw, thanks, Kathleen. Glad you liked the Belafonte clip, too; I have no idea why I thought it was suitable for this episode, but I like it too!

I like the casting in the film--Sebastian Cabot as the Ancient Mariner is inspired.
I had to look up Anjanette Comer on Imdb. It says her love life interfered with her career--such a shame.

wonderful twist to the story. I was wondering how Buddy/Cordelia would break it to The Mariner, but Fate got the jump on them. Brilliant.

I wish Buddy would pop the Mariner one.

Manny, check out "The Appaloosa", a somewhat obscure Marlon Brando western, for Anjanette Comer in her prime.

Di, I almost took out that line about the nose-pop! I'm glad I left it in now, and Happy New Year to you and yours down under!