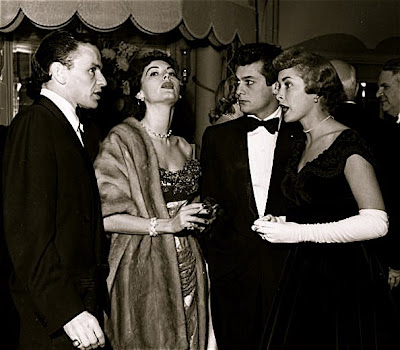 In our previous episode of this masterwork from the prolific Remington portable of Larry Winchester, our heroes -- circling the earth in a casino-equipped flying saucer -- were regaled by Frank with the raison d’être of his “ancient and wise” race, and the perspicacious Daphne summed it all up with “what you’re saying is you yourselves have no lives of your own, and so you live vicariously through us..."

Frank paused, then, spreading his hands, he looked around the table.

Harvey picked at the label of his Falstaff Beer bottle.

Dick lit a cigarette and, toying with his scuffed old Ronson lighter, he stared intently at Frank.

“And, yes,” Frank went on, “Mr. Ridpath, sometimes we pick up an -- oh, how shall I put it -- an exceptional earthling -- and, with a device we call the ‘Brain Flusher’, we -- well, we kinda sorta empty out the entire contents of the subject’s brains into one of these teeny tiny little ‘computer chips’ they call ‘em. Then back home a client just clips on a special sorta helmet kinda thing, presses a button, and -- wham -- he’s actually living the earthling subject’s life -- including his dreamlife, might I add.” Frank took a sip of his Dom Perignon. “Except it’s better than actually living life ‘cause ya got a rewind button for the good parts, and a fast-forward for the dull shit --”

“That is correct, sir,” said Frank. “And you might be pleased to know that those contents of your brain -- in essence your very life, every moment you lived up until January 9, 1965 -- have been in the top ten for the past four-and-a-half years!”

“Fabulous,” said Dick. “Do I get any royalties?”

A ripple of nervous laughter coursed around the Pack.

Dick didn’t laugh, though, and neither did Daphne or Harvey.

“Mr. Ridpath, as I have said before, we are not pikers; and we shall address the issue of -- oh -- compensation -- forthwith.”

He now leaned back, smiling, expansive.

“I’ll tell you what it explains --” said Daphne.

“Is that an empty glass I see before you, Mrs. Ridpath?” said Frank. He stood up halfway, picked up the magnum that stood on the table next to Daphne and filled her glass. “Leave it not be said. Mr. Ridpath, may I?”

Dick waved his hand, and Frank freshened his glass.

“I’m good,” said Harvey, who had only drunk about two-thirds of the one glass Arnold Stang had poured him a while ago.

“Just to wake up the bubbles,” said Frank, and, bending awkwardly over the table he dumped way too much champagne into Harvey’s glass causing six or seven ounces of the exquisite wine to foam up out of the glass and down onto the table cloth.

Frank shoved the bottle back into one of the entirely unnecessary ice buckets the waiters had put down and then finally he sat the fuck back down.

“But really,” he declaimed, “all I have thus far mentioned -- as fabulous as it all is -- is still only just part of our fabulous operation here.”

Dick leaned back in his chair, smoking, looking away from the table and off into the smoky and gaudy crowd.

Dick waved his cigarette indulgently, as if to say, more champagne, more bullshit, call me Dick, whatever.

“It’s kinda like in Vegas,” said Frank. “Now f’rinstance the slots are just great for most people -- just as the real-life dramas --”

“Whatever --” said Frank, “alla this product we beam back home is great for most people, as are your wonderful earthling books and films and TV shows -- as are the, uh, 'brain-flushings' -- but -- just as the slots are not enough for some earthling high-rollers, so it is also with some of our people.”

“Heh heh. Whatever,” said Frank. “And so, to accommodate these high-rollers -- and in point of fact all these good people you see around you at the tables right now are just such high-rollers -- we have got a very special vacation package whereby we bring folks in from our world, give’em human forms and send ‘em down to earth for a while. So it’s kinda like watching a movie where you are actually in the movie. It’s real. Alla these wonderful people here are undergoing our 'how-to-act-like-an-earthling' orientation, and when they’re ready they’ll go down and actually live among you wackos for a while. Some of our guests dig it so much they spend twenty-thirty years on earth.”

“They get the bug,” said Joey.

“Yeah, we call it the Earth Bug,” said Frank. “Some people just can’t get enough.”

“Fine with us,” said Frank, “as long as they keep their monthly payments up.”

“You most certainly have,” said Frank.

Daphne raised her champagne to her lips.

Daphne sprayed a mouthful of fine champagne across the table.

(Go here for our next wacky installment. And kindly turn to the right hand side of this page for a listing of all other extant episodes of Larry Winchester’s A Town Called Disdain™, third-place prize winner of the Lucky Strikes Sprawling Epic Award. Be sure to check out our listings of many of Larry's fine feature films as well, DVDs of which may be found in the bargain bins of better Walmarts nationwide.)

I always suspected there was something just a little bit extraterrestrial about Daphne. And I mean that in a good way.

"f’rinstance" alone deserves royalties. And the video, the singer and the song are so, so great.

Daphne may be part exraterrestial, but she's not living someone else's life. No way Larry's gonna convince me she's being Daphne Ridpath in Disdain--and Cape May--as part of a vacation package.
Flying saucers, Swampoodle, the background players really being the main guys--all that's eminently plausible. But Daphne a fake? No!

Did Larry Winchester ever do any Twilight Zones or Outer Limits? 'Cause this could be one.

Larry unfortunately never directed a Zone or a Limits, Manny, but he did helm several immortal episodes of Dane Clark Presents.