“A Town Called Disdain”, Episode Eighty-Six: “We are all Swampoodlers here.” 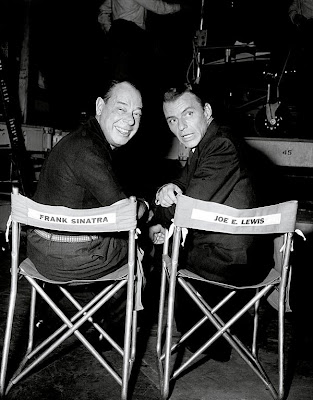 Yes, Larry Winchester has taken us a long ways away from a little town called Disdain...

In our previous chapter Frank revealed to our heroes that he and the Rat Pack were in fact denizens of a planet “far, far away” called Swampoodle. As if that weren’t weird enough, it turns out that the night club they’re all in is part of a vast flying saucer floating between the earth and the moon, but invisible from the earth because it’s in another dimension, called Fishtown. This is too much for Daphne, and she bursts into a laughing fit.

Everyone waited, and when Daphne had calmed down a bit, Dick -- wanting to change the subject, but also genuinely curious -- said, “Frank, I wonder if I might I ask a question?”

“Thank you. Whereas you fellows look like, well -- you know. Plus all these other people here -- they look like --”

“That is correct,” said Frank. “We are all Swampoodlers here.”

Daphne, her beautiful eyes bulging, held her fist steadfastly over her mouth.

“So what gives?” asked Dick.

“Mr. Ridpath,” said Frank, “I have been in this business a very long time, and if there’s one thing I’ve learned, it’s ‘Give the people what they want’. It’s like my very good friend Joe E. Lewis says: ‘They want shit, give ‘em shit.’ You earthlings don’t want us to look like you. You want bug-eyed monsters, we give you bug-eyed monsters. Now when we’re here in, uh, Fishtown --” He paused, glancing at Daphne, but she maintained her composure. “When we are in this alternate dimension we are able to assume any shape we damn well please, just as in dreams. And when we pass through the wall into your reality we retain that particular corporeal reality so to speak.”

“Indeed it is, my young friend,” said Frank.

“So what the hell do you really look like?” asked Harvey.

“I don’t think you wanta know that, Sonny-Jim,” said Dean, with a languid smile.

“I will take your word for that, sir,” said Harvey.

Helen Bedd had finished stripping and gone off, and a singer was onstage now, it was Johnnie Ray, or someone very much like Johnnie Ray, circa 1956.

“So,” said Daphne, showing she was back in charge of herself and able to hold an intelligent conversation like a well-brought-up person, “just to be sure I’m following all this -- you are not really Frank, and these guys are not really the Rat Pack.”

“Mrs. Ridpath, we are better than that. We are the quintessence of the Rat Pack.”

Frank waved to two waiters who stood respectfully nearby in their worn little red jackets, and they quickly came over. The one guy was played by Wally Cox, the other one was Arnold Stang.

“Another round, boys, same for everybody, and tell the bartender to put some booze in them this time. And get Harvey a real drink. What about a whiskey, Harve? Four Roses? Schenley’s?”

“I’ll take a Jack Daniel’s,” said Harvey. “On the rocks, please. And another beer.”

“Beer and a Jack,” said Frank. “Make it a double Jack. Doubles for everybody.”

Wally and Arnold dashed away in between the crowded tables.

“I think you guys are really weird,” said Daphne.

“So, like,” said Harvey, “you’re just pretending to be Frank and the Rat Pack?”

“What, you don’t think we’re cool?” said Joey. “What would you like us to be, Herman’s Hermits?”

“Okay,” said Dick. He paused, for just a moment. “I’m wondering, just what are you doing exactly, you know, visiting the earth and, um, flying around in flying saucers, assuming human shape? You’re obviously far more advanced than us, so why the hell are you fooling around on our little planet? Is it scientific research, or -- are you trying to take over -- or -- I mean, what’s in it for you guys?”

Dick was quite serious, but the Rat Pack all seemed rather amused, and Joey and Dean even had to stifle laughter. Frank raised a finger to keep the boys in line, then addressed Dick.

“Yes,” said Frank. “It’s you humans. We can’t get enough of you. You and your favorite pastimes: sex, war, and insanity.”

To this Dick said nothing.

Daphne stubbed out her cigarette, pressing her tongue against the inside of her cheek.

“Okay,” said Frank, addressing Dick in particular, “perhaps you are offended by my candor and I can understand this. But you will I hope grant me this: you humans are a hoot, a laugh a minute, and never a dull moment. Always somethin’ happenin’. Now our race --”

“The Swampoodlers,” said Daphne, not laughing at all now.

Wally Cox and Arnold Stang arrived with the new round of drinks and started laying them down.

Frank picked up his double Four Roses Manhattan and held it up so that the stage lights shone through it.

“Oh, brother,” said Daphne, and without waiting for Arnold Stang to lay down her own double Manhattan, she reached up, took it off his tray, and took a good long gulp.

(Go here for our next laff-packed episode. And be so good as to check out the right hand side of this page for an up-to-date listing of links to all other possible chapters of Larry Winchester’s A Town Called Disdain™, soon to be a major motion picture from RKO, starring Lawrence Tierney, Ida Lupino, and the Bowery Boys; written, directed and produced by Larry Winchester.)

Entertainment answers a lot. But after the truth, I still have lots more questions. So keep this coming. I missed the interlude.
Do certain Swampdoodlers get a kick outta playing a stripper? That's not uncommon among humans, of course. But Swampdoddlers? Okay, now I see the humor there. But it's funny-sad, which anything truly comical must be.
Heavy psychology, too, in the type whose best fun comes from serving Blue Eyed Mr. Mention there.
Of course, my thinking's ever earthbound.
PS. Ever since the last episode, I've wondered what's French for Swampdoodle?

Yeah, it's funny to think that aliens might get a kick out of playing "background" humans. But maybe to them Frank and the Pack are in the background.

Oh, and Larry tells me that the French for Swampoodle is Marais-Carniche.

Manny tried to pronounce Marais-Carniche for me, after I figured my attempt didn't come close. It matched his, however, making me suspect that Daphne would giggle at the Swampoodlers in any language.

This story is blowing my mind, man!