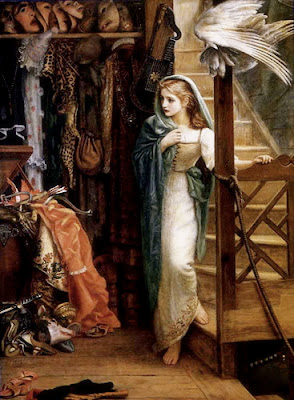 Larry Winchester, master film maker and equally masterful novelist, here blows our minds with yet another sudden change of scene and viewpoint, to that of Hope, the ethereally beautiful young daughter of the cowardly blowhard and undoubtedly venal rancher (and major Nixon campaign donor) Big Jake Johnstone.

The place: the sprawling Victorian Johnstone mansion, several miles outside of A Town Called Disdain, in that land of enchantment that men call New Mexico.

There lay all their things.

Suitcases and bags open, clothes strewn all over the floor and the bed.

Hope went over and knelt down by the big cerulean blue suitcase on the floor with women’s things gently exploded all around it, and her hands ran tumbling like small mischievous creatures through the treasure.

Miss Craig’s 21-Day Shape-up Program for Men and Women, which didn’t seem to have been opened.

Jacqueline Susann’s The Love Machine, with a receipt from Saks 5th Avenue stuck in as a marker between pages 74 and 75. On the half title page an inscription in purple ink:

“To the lovely Daphne -- I HATE you because you’re beautiful and I WANT your divine hubby -- Love, Jackie”

A pair of pale blue bikini panties edged in lace caught Hope’s eye. She picked them up and held them to her face.

Then, after checking the tiny label, she put the panties into the side pocket of her blue jeans.

She spent about twenty minutes going through all of Dick and Daphne’s stuff.

Daphne had excellent if occasionally bizarre taste in clothes.

Dick’s clothes were refreshingly free of Nehru jackets, white plastic belts, oriental pendants, and paisley ascots, but she noticed the reinforced and oddly-shaped leather-lined side pockets in several of Dick’s older jackets and coats. She found the boxes of bullets, .38 Special and 9mm, and correctly surmised the purpose for the holster-shaped pockets.

More books. Dick’s books. Evelyn Waugh’s Sword of Honour. A Vietnamese-English dictionary. Ripley Under Ground by Patricia Highsmith. Three Novels by Samuel Beckett and The Way of Zen by D.T. Suzuki. An old New Cambridge Shakespeare, worn and foxed, the cloth gone from its spine. Boyish notes and drawings on the tissuey pages, more drawings, and notes and class times scrawled on the inside covers, along with a poem:

Some magazines. A New Yorker, a Ramparts, a Evergreen, a Zap comic book.

She expertly rifled through Dick’s old seabag and found the velvet-lined boxes with the medals in them. Dicks’ passport with the pages all filled with the stamps of many countries. His honorable discharge from the US Navy. Another passport in his name, this one with a different picture, with moustache and blond hair. And another passport with yet another picture, blond hair but no moustache, and another name: Richard Cadwallader.

A paperback on the bed, Slaughterhouse-Five. She folded her legs beneath her on the bed and began to read.

Five or ten minutes later someone was fiddling with the door lock.

She sat there with the paperback open in her hands and the door came open.

It was that weird man Mr. Adams, that friend of that Mr. Philips who was also weird.

He took some strange instrument out of the keyhole and put it into his pants pocket.

“I was changing the sheets,” said Hope.

She put down the book but remained sitting yogi-style on the bed.

He left, and she sat there for a bit and then she drew the jumbled covers back and lay down stomach first on the bed, her face in the pillow, breathing in the redolent smells of Daphne and Dick.

(Click here to go to our next breathless chapter. And please feel free to check out the right hand side of this page where you will find an exhaustive list of links top other episodes of Larry Winchester’s a Town Called Disdain, soon to be adapted into a multi-volume trade-paperback “manga” from Ha! Karate Multimedia in conjunction with Larry Winchester™ Productions.)

How old is Hope? She seems young enough so that her snooping suggests more mischief than malice.

"..by the big cerulean blue suitcase on the floor with women’s things gently exploded all around it"

And, Kathleen, I think we can be forgiving of Hope, not only because she has Big Jake for a father, but because she's only seventeen or eighteen.