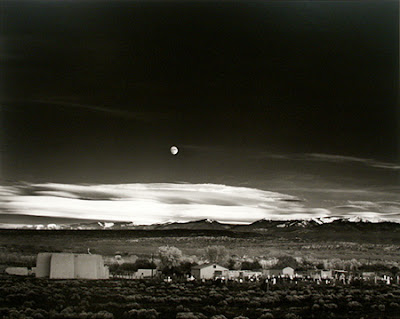 Seemingly oblivious to such earthly concerns as advancing the plot, we continue our Schaefer Award Theatre serialization of Larry Winchester’s great American epic.

Dick (the mysterious stranger who has befriended the young soldier Harvey upon his return from Vietnam to his hometown of Disdain, New Mexico) now finds himself, with his lovely young wife Daphne, in the big Victorian house of the slightly suspect rancher Big Jake Johnstone. Two men have already died violently on this first day. How many more will follow them to Boot Hill?

Dick had trouble getting to sleep that night. Daphne was out cold, but he was still wide awake and very high so he got out that new Vonnegut book Slaughterhouse-Five and he read that for a while, and it was good but then he started to get that old feeling that his mind was slipping, just slipping off into that black void outside and never to return, and he looked up from the book, and the dark old floral wallpaper of the room seemed to teem with millions of blinking little eyes all looking at him, and it felt like this room and this house itself were floating somewhere out in that black void.

Then he remembered that big blue pill, the one the Dutch hippie guy at Rod’s party had called “the Doomsday Pill”, so Dick figured what the hell and he found it in his shaving kit, wrapped up in some Spearmint foil, and he unwrapped it and put it in his mouth and crushed it between his molars and swallowed the bitter chalky bits with his spittle and then he lay back and read some more with dark seas of madness crashing outside the windows, and the next thing he knew he was lying on something like an operating table in this very white room and all these lights were shining down on him and creatures were looking at him and talking about him but it was some language he couldn’t understand, and he was naked and cold, but cold on the inside while the outside of him was warm from the bright lights, and he had to pee but he couldn’t get up, he tried and tried but it was as if some great soft invisible hand was holding him down.

And then he thought, or forced himself to think, I’m dreaming I’m dreaming and he tried to wake up and it was not easy but he really did have to take a pee, and he really was cold on the inside, and then he opened his eye and it was daytime, and he was awake and there was a film of sweat all over his body and the sheet was damp under his back, and he was so groggy, so very groggy.

Daphne had pulled the covers off of him and he was naked. He tried to remember the dream and he couldn’t remember a thing. He lifted his arm up as if it were something attached to his arm, and he looked at his watch and tried to focus and saw that it had stopped, at 2:03 in the whatever. The reading lamp was still on. He reached his hand out and felt the little engraved ring on the end of the chain; he pulled it and the lamp switched off.

For a moment he stared at the little Philco transistor radio on the night table, but of course it was silent.

He felt very drugged. His mouth tasted like cardboard. He really had to take a wicked pee.

Daphne was turned away from him, tangled up in the covers, snoring slightly. Good. The dead don’t snore.

Getting out of bed was a major production. When he finally got to his feet he just stood there for a while, garnering his forces.

The room was old-looking, filled with a lot of odd crap he had been too high to notice the night before.

A stunted brown cactus in a cracked Victorian vase.

A plastic crucifix above the door with a seashell-pale Christ which undoubtedly glowed in the dark.

A standing wardrobe like a confessional in some shabby church.

A grim rotogravure of Pope Pius XII, looking like some long-discredited inquisitor.

It all reminded him of Daphne’s grandmother’s place in Cape May.

He reached down into the open suitcase on the floor and pulled out his old kimono; he managed to get into it and tie it closed.

He passed a window and it was as though he were still in a dream -- through the tatty thin lace curtains he saw what looked like a western movie ranch, brightly sunlit corrals, cattle, horses and cowboys, and all around lots of cactus and scrubby bushes and odd-looking trees, with greenish hazy hills in the background under a bright blue backdrop sky, and then he thought, Well, of course, this is a ranch, and he moved thickly to the door.

Threadbare carpets, more dingy wallpaper, a slow walk down a grey hallway, light shining past him from a stained glass window at the end.

The smell of old wood and old wool carpeting.

He found a bathroom. An old claw foot tub with rust stains. A toilet with the tank on top and a chain hanging down with a wooden handle; the paint on the chain and handle jaundiced white and peeled and cracked.

He peed. A lot of pee. And a very strange azure color, he assumed from the Doomsday Pill.

He drank some tepid water from the tap, running it into his cupped hand and lapping it. It tasted soft and odd, reminding him of something he couldn’t remember.

He made his way back to their room.

There was Daphne, sprawled on her back now, mouth open a bit, one naked breast exposed.

The transistor radio, somehow looking as if it were about to say something, but saying nothing.

He let his kimono drop to the floor.

He got back in bed. He leaned over, took her breast in his hand and kissed the soft nipple and then licked it, tasting her salty warmth. She mumbled something and turned over on her side. He was just a little hard, and he pressed himself into the cleavage between her buttocks, and then he fell asleep again.
****


(Click here to see what happens next. Turn to the right hand side of this page for handy links to all other extant episodes of Larry Winchester’s A Town Called Disdain, and to appreciations of many of Larry’s classic motion pictures, some of which will soon be available in handsome and reasonably priced boxed sets from Ha! Karate Home Video, Yokohama, Japan.

A fine balance here, inside Dick's drug-addled head, his dreams and reorientation. Balanced further with especially fine description: just enough of the most revealing details.
But where oh where is Harvey sleeping? Another bedroom in Jake's house? On the couch, at his home somewhere in Disdain?

Stay tuned! All will be revealed; what cracks me up is that Dick forgets to think about how he just shot some motorcycle-gang member earlier in the evening.