“A Town Called Disdain”, Episode Fourteen: interlude on the road, or, Big Jake’s a big coward 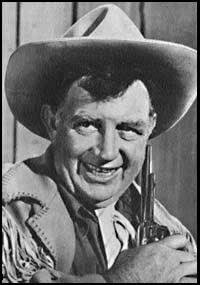 Previously in this serialization of that great American epic A Town Called Disdain, written by the legendary Larry Winchester (“Not only our most undervalued great film-maker, but perhaps our most profound living novelist.” -- George Will):

It’s still Harvey’s first day back home from Vietnam. Or rather the night of that first day, and Harvey and the mysterious Mrs. Daphne Smith have been waylaid by a vicious motorcycle gang called the Motorpsychos. Fortunately Daphne’s husband Dick pulls up in the rancher Big Jake Johnstone’s 1969 red Cadillac Coupe de Ville convertible, and, while Big Jake pretends to be drunkenly passed out, Dick saves the day, in the process shooting one of the Motorpsychos dead.

Sheriff Dooley arrives on the scene like a bonus god from a machine and sends the Motorpsychos packing with their dead comrade.

With a hellish cacophony of mechanical vomitous noise that was only to be expected from their like, the Motorpsychos roared off toward the hills, and finally Big Jake heaved himself up from the floor space of the Cadillac. He made a great show of rubbing his eyes and shaking his head, and then he shoved his bulk out of the passenger side and walked around to where Dick and the sheriff stood with Harvey and Daphne as the dust and exhaust settled down all around them.

The sheriff had holstered his own gun and was now examining Dick’s small revolver. Dick, Daphne and Harvey were all smoking cigarettes.

“Not bad for a small piece,” said the sheriff to Dick, ignoring Big Jake.

The sheriff spun the cylinder of the little gun, then aimed the pistol out at the darkness, squinting.

“Shrouded hammer,” said the sheriff. “So it don’t catch up on your pocket.”

If only things would stop vibrating. Ever since he shot that guy it was like a movie where somebody was rocking the projector back and forth. Never shoot a man on acid again, he thought. Never.

“Whoah! What happened here?” said Big Jake, stepping around the enormous pool of blood where Crackle’s body had lain.

“Mr. Smith here shot one of them Motorpsychos in the eyeball.”

“He was annoying us,” said Daphne.

“Yes, while you were, what was it, sleeping?” she said.

“Passed out! Just passed plum out! Why, Dick, you shoulda woke me up! I coulda helped ya out with this here shootin’ iron!”

He pulled out his Colt six-shooter.

“Put that thing away, Jake,” said the sheriff.

“Sure thing, sheriff! Just sayin’,‘s’all.” He holstered the gun. “Coulda helped out.”

The sheriff handed the little revolver back to Dick.

“Well, sir, I think you’ve shown that even a little weapon like this can be efficacious in the right circumstances.”

“That’s correct, Sheriff,” said Dick, putting the gun back into his shorts pocket.

“Smith & Wesson man my own self,” said the sheriff.

“So I saw,” said Dick. He was so tripped out, it was an effort to pronounce each and every word, but somehow the words came out. “I’ll tell ya something, when I was in the service, try as they would to get me to carry the standard-issue .45 -- and I think that’s an excellent weapon -- my sidearm of choice was the Smith .44 Magnum, just like yourself.”

This was untrue. Through most of his years in the service he had carried the same trusty Browning Hi-Power, which he had won in a poker game with a British marine lieutenant back in Korea. However, he had learned a long time ago that no matter what country you were in it didn’t hurt to make friendly with the local law.

“Yep.” The sheriff patted his holster. “The old Model Six Two Nine does give one a certain feeling of -- how shall I put it -- serenity."

"Nice looking vehicle you've got there, too, Sheriff." Dick felt his mind lurching from side to side as he said this.

“Next time you got some big fat old boy comin’ at ya with a sap -- and I ain’t sayin’ what you did was wrong or uncalled for -- but next time, why’nt you think of maybe some other way of stoppin’ him short of puttin’ a .38 slug in his eye.”

“I ‘spect you can handle yourself.”

“Just think about it’s all I’m sayin’. Less paperwork for me and all.”

“Hell, Sheriff,” said Jake, “you gonna do paperwork on a dead one of them Motorpsycho scum?”

“After your little nap.”

And Big Jake turned and lumbered quickly back to the Cadillac.

The sheriff turned to Dick and said low but clear:

“Jake Johnstone always was a chicken shit. You be careful with him, mister.”

“You friends with him?”

“No, sir, we’re just here on vacation, staying at his ranch.”

The sheriff looked from Dick to Daphne and Harvey, who were both leaning back against the Thunderbird, still smoking their cigarettes in that dry desert air that had dropped about forty degrees Fahrenheit since that afternoon.

“Did I say welcome back, Harvey?” said the sheriff.

The sheriff tipped his hat to Daphne.

“Thanks ever so much, Sheriff,” said Daphne. “You’ve really been a tremendous darling.”

The sheriff paused, then turned and headed back toward his Plymouth Fury.

And then the ranch began to loom up toward them out of the desert under the stars, it looked like a movie with its stables and corrals and enormous barn, and plumb in the middle this great big wooden Victorian house with gables and dormers and towers.


And their room, the brass bed, that enormous cool crisp bed and above it the queer little painting of the World War I soldier returning to the little country cottage, and then sleep at last.

(Click here for the next exciting chapter. For quick links to other episodes of Larry Winchester’s A Town Called Disdain -- soon to be a major motion picture event, providing Larry’s Japanese investors really come through) -- and to pithy celebrations of many of Larry’s classic motion pictures, please go to the right hand column of this page.)

As usual, I enjoyed this more than I can say.
But until I saw it here, I used to think, "I'm just saying..." was Blue Girl's personal witticism, not unlike her "Pshaw!"
Yesterday, though, I was wandering around Wall St., near where I live, and eavesdropping on both the curb-side umbrella sales people, who all happened to be men, and the slick young bankers, who also all happened to be men.
Does everyone know Blue Girl? Have they always?
Because the only words I caught clearly, from the old guys in their raggedy tracksuits and from the slick young bankers in their rep ties, were: "I'm just saying..."
Tonight I'm going to yoga. Now, if all the luscious, young, dancer, model kuli-girls (of which Manny and I are the lone exceptions), who tend to favor, "sweet" and "no worries" are all whispering "I'm just saying," no way I'll believe it's coincidence.