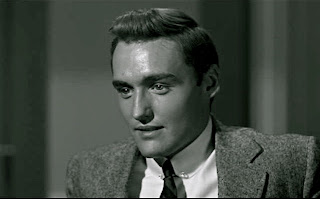 The intense Dennis Hopper plays a rather annoying young department-store sales clerk who wakes up one day to discover that everyone else on the planet has disappeared. After some tortuous establishing adventures (on the city streets of the old Monogram lot in "Gower Gulch"), Dennis moves into the enormous store in which he had previously been employed. He helps himself to all the wares, changing into several different flashy suits every day, cooking himself big frozen-steak dinners on charcoal grills, sleeping in different beds in the bed department every night. He turns on all the television sets in the TV department and spends hours staring at the test patterns. He sets up an enormous system of toy trains and leaves the trains running constantly. (For some reason the electric power remains on.) He then develops an attachment for one of the female mannequins, pouring out to her his hopes and dreams. Finally late one night he throws a fit because she won't talk back to him. He tosses her against a wall and her head breaks off. Full of anguish, he hurls himself through an upper-storey plate-glass window. (Spoiler alert!) The last shot shows him lying on the pavement with passersby stepping over him as if he isn't there.

Perhaps the strangest film ever made, and one of the best.

(Currently unavailable on DVD, rumored to be included in an upcoming boxed set of Larry's prolific late-50s work from Ha! Karate Home Entertainment of Yokohama, Japan.)
Posted by Dan Leo at 5:04:00 PM