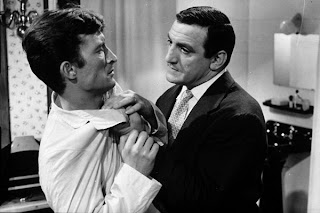 In 1962 Larry Winchester found himself unemployable in Hollywood after a drunken brawl ("At least I was drunk," wrote Larry in his memoir I'll Take the Low Road) in the Musso and Frank Grill with a Universal Pictures vice president. Larry moved to France (where his pictures had long been lauded in Cahiers du Cinéma) and within a couple of months had already completed his first project, the unrelentingly hard-boiled Fiche-moi le camp! Supposedly written in one long weekend with Larry's old drinking and fishing pal "Rags" Larkin, this flick gave Gallic tough guy Lino Ventura what many critics consider the role of his career, as mob enforcer Mickey LeBouef, a very hard man whose heart goes dangerously soft for pouting chanteuse Millie Malone (Marie Dubois), the sexy young wife of exiled American gangster Danny Fingers (Dane Clark). Featuring an unbilled cameo by Fred Astaire as the debonair freelance hitman "Bobby Flowers", and one of the earliest screen musical performances of French teen idol Johnnie Hallyday.

A badly-dubbed version called Buzz off, Jack! was released on a double bill in the US by the Stanley chain in 1964 with the British kitchen-sinker This is My Street. It soon sank without a trace, and by all accounts this classic film has not been seen in this country since.

Criterion Collection: get on the case!


(Kindly turn to the right hand side of this page for a listing of other fine films from Larry Winchester. And be sure to check out our Walgreens Award-winning serialization of the "Director's Cut" of his long-out-of-print novel A Town Called Disdain.)
Posted by Dan Leo at 11:52:00 AM

A very wise man said to me once:
"I think I'll have a bath."(Perhaps it was that Dan Leo fellow, come to think of it)
And that my friends is what I'm going to do right now, to wash the dirty feeling of an uncaring Hollywood machine that would trample a true Artiste so.
Wasn't he the first director to use our friend who we affectionately refer to as "The Ancient Mariner" on stage?

By the by, James Burke says Coleridge was a spy during his stay on Malta around 1804-06, but his official title was something like:
Public Secretary of the British administration of Malta