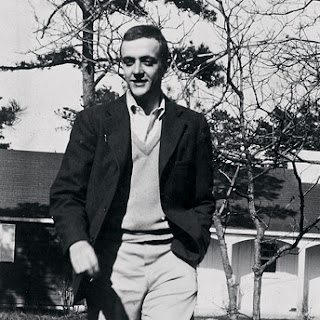 "Why me?" he asked the guard.
The guard shoved him back into the ranks. "Vy you? Vy anybody?" he said.

I respect a man of good taste and humor--he despised Geraldo Rivera and king Shrub:

"I've been smoking Pall Mall unfiltered cigarettes since I was twelve or fourteen. So I'm going to sue the Brown & Williamson Tobacco Company, who manufactured them. And do you know why?" "Lung cancer?" I offer.

"No. No. Because I'm eighty-three years old. The lying bastards! On the package Brown & Williamson promised to kill me. Instead, their cigarettes didn't work. Now I'm forced to suffer leaders with names like Bush and Dick and, up until recently, 'Colon.'"....

Ah, if Shrub and Dick had only read Vonnegut in their younger days...But then if they had they wouldn't even be the Shrub and Dick they are today, and therefore they wouldn't ever have been elected as Chancellor and Prime Minister, and...oh, forget it. Thanks for the comment and for the quote, Anon. (On a completely unrelated topic, "Punch-Drunk Love" is on the TV, and I just love the whole concept of Adam Sandler as this dweeb henpeckecked by his flock of sisters...)

'It is high time I was dead...Farewell, hello, farewell, hello.' or, perhaps more memorably, 'Go take a flying fuck at a rolling doughnut.'

Just to bridge Easter and Kurt:

"Say what you will about the sweet miracle of unquestioning faith, I consider a capacity for it terrifying and absolutely vile!"

Yeah, it's like Bill Burroughs said...well, I can't remember exactly what he said but it boils down to: you just can't do business with religious people because they're so damn sure they've got God on their side. "Not with the good Lord tellin' 'em how to fuck you on the deal!"

For Dan and his merry band,

Anonymous is the only way I've been able to post

Dear Forced-Into-Anonymity Above,
I don't know why this is, but I am so computo-illiterate that it's a miracle I even have a blog. Some other commentators have managed to use all sorts of outlandish names, some of which I strongly suspect are noms-de-plume. Could this be a problem arising from your particular browser? Or did I do something stupid recently in my blog settings? I throw my hands up and beg advice from the techno-savvy for the solving of your difficulty.

To all who believe in anonymity, in the age of the rat-eating Bush administration and their reign of fear that privacy has vanished into the same wormhole as our moral standing.
Mr. Leo, the problem does not reside with you or your settings. You have done an admirable job for someone with implied neo-luddism tendencies.
If you sign into gmail or, as our Dear Leader refers to it, 'the google', you should be given an option between typing your missive to our favorite Philadelphian historian and clicking the 'publish your comment' thingamajig (sp?).
Noms-de-plume? Please....

Hey, thanks, Pierce, and a tip of the Leo lid to you. Previous Anon, do what Pierce said and let your name (or n. de p.) be cast forth into the blogosphere in all its glory.

Ich bin Dave Grill, Und ich habe veil Sehnsucht für Herrn Vonnegut.
Goodnight Mr. Vonnegut, thank you for helping me formulate how this world works lo those many years ago. It's a sad world after all, how can we be anything but kind? I remember reading his books when I was 12 or 13, all of them at once, (those that were published) and at that time I averaged about a book a day. Before I started working for a living, I could do that, the heady glorious days of youth, with my little schnozz stuck in book after book.
I have to admit it took a long time for the more subtle and compassionate teachings of Kurt to sink in, I suppose we only learn those things after a few years on our little stinking ball of mud here. But he helped me somehow.
"Nice, nice, very nice
so many people in the same device"
"No goddamn cat, no goddamn cradle"