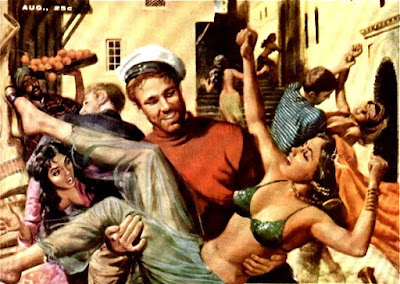 “Them goddam stiffs,” said Packy O’Hara, taking out a fat Havana Churchill, “them goddam zombies, I would not urinate on them if they was on fire.”

Packy bit off the end of the cigar and spat it out onto the concrete backstage floor. Sonny already had his lighter out and he clicked it into flame.

“Thanks,” said Packy, drawing the flame into his cigar.

“Tougher than the Poconos, even,” said Sonny.

They found a couple of stools out at the bar and Sonny ordered: double C.C. and seltzer for Packy, plain seltzer for Sonny.

“Hey, Packy,” said some square, and he clapped Packy on the shoulder. “Loved your show, sir.”

“Cadwallader’s my name. Jack Cadwallader. Mr. Cadwallader to my friends. Ha ha. Packy, I got a question for you. Do you do private events?”

“Mr. Cadwallader. If you’d like to book me for an event you should talk to my manager Sonny here --”

“How does ten grand sound, Packy.”

“Ten grand for one night’s work.”

“One show. Or 'set' as I believe you showbiz types call it.”

“I only got two questions for you, Mr. Cadwallader.”

(Scroll down the right-hand column of this page to find a listing of links to the opening passages of many other fine but inexplicably out-of-print novels by Horace P. Sternwall.)
Posted by Dan Leo at 6:14:00 AM

Horace seems to be among those writers that masters both pulp fiction and high poetry. It took me awhile to notice; I'm not big on labeling.

Sternwall transcends all labels. He is his own label.

I have read that Horace was a big influence on Jim Thompson. Don Rickles, too.