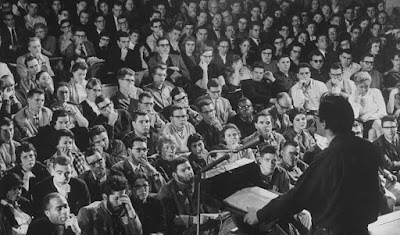 After twice discomfiting the Prince of Darkness (AKA “Mr. Lucky) in the most humiliating manner, our hero Arnold Schnabel has been exiled by that vindictive fallen angel to the pages of an all-but-forgotten novel called Ye Cannot Quench, a lusty bildungsroman of 1950s New York City written by another of Arnold’s nemeses, Gertrude Evans, author of many other volumes such as Kingdom of Passion; Suburb of Lost Souls; Set Sail for Tomorrow; and No Tears for Tessie.

Let’s rejoin Arnold on a rainy Tuesday night in the summer of 1957, deep in the heart of Greenwich Village at that Bohemian hotspot the Kettle of Fish, where in his current persona of “Porter Walker, handsome and romantic young poet” he has been declaiming from his epic poem The Brawny Embraces...

(Please go here to read our previous episode; the bewildered may wish to click here to return to the very first chapter of this Gold View Award™-winning multi-volume memoir. ”Arnold Schnabel -- the very name dilates the pupils of the eyes of littérateurs worldwide.” -- Harold Bloom, in Mechanics Illustrated.)

Suddenly the audience burst as one into a great churning roar, and for a moment I thought they might all be shouting at me in justifiable outrage at the imbecility of my poem, but then out of this multifarious deafening babble I made out the by now all too familiar phrase “Go, daddy, go!” and its dozens of permutations.

Meanwhile in answer to this tidal wave of huzzahs the band in back of me played louder and more frenetically still, all five musicians seemingly playing unrelated solos at once.

I became aware that I was now absolutely oozing with sweat, even more so than earlier when I had been stuck alone with Emily; my clothes felt as sodden and glutinous as if I had just been chased by a pack of bloodhounds through some fetid southern swamp. Unconsciously I wiped my eyes with the back of my hand, and the salt entered into them, stinging and almost blinding me.

I lifted the enormous poem to within inches of my face, just to one side of the microphone. I wiped my eyes again, and that just made it worse. I blinked repeatedly, but the print swarmed unintelligibly over the page like an army of drunken ants.

Piercing through the hubbub I distinguished Pat’s and Carlotta’s voices calling in unison: “Por-ter! Woo hoo!”

“Maw,” said Maxie, who was standing only a couple feet away from me; through my fogged eyes I could make out that he was not even bothering to hold his bleeding ear any more. “Maw.”

I put one hand over the nubbly head of the microphone and leaned toward him.

“You mean maw like the mouth of an tiger, or a whale or something?”

“Or, like I’m staring into the great gaping jaws of the universe, maybe, waiting to be swallowed up and devoured? That kind of maw?”

“Nah, I just meant read some maw of your poem, Mr. Walker.”

The crowd was still going crazy. I took my hand off the microphone and tried looking at that great flopping slab of a poem again, but I might as well have been trying to read an epic poem in Swahili.

I considered trying to reason with the mob, to explain to them that due to causes entirely beyond my control and not my fault I was literally unable to read any more of this nonsense, but then suddenly I had another one of my occasional brainwaves. It was true that in this world I might be “Porter Walker, bohemian poet”, but inside I was still Arnold Schnabel and a bad poet in my own right. Perhaps I could recite one of the many thousands of poems I had actually written, all of which, although they were just as asinine as Porter’s epic poem, had at least the decency of being short, not to mention rhyming.

I cast around in the mossy Carlsbad Caverns of my skull and came up with one of my more recent poems, written not long after my mental breakdown. I lowered Porter’s massive poem, and, stepping close to the microphone and feeling like my own little island between the frenzied audience and the “smoking” combo, I spoke, very slowly and measuredly as I pulled each word and phrase from my memory, but nonetheless with the confidence that my own rubbish could hardly be much worse than Porter’s:

I who was sane if perhaps slightly strange
Have now been reborn as a maniac,
And with this new life in me comes a change
In the world around and in the eyes
Of the people in that world. I look back
On a life in which I had my own place;
But then came a night when to my surprise
That life ended and I became unreal.
Who is this new actor behind this face?
If someone would only give me a script
I’d sit right down and start to memorize.
It’s sad, but now I’m beginning to feel
It’s me who’s going to have to write it;
Otherwise I’ll just have to improvise.

That was the end of the poem.

The combo continued to play behind me, but in a much softer way, and whereas shortly before they seemed to be playing five different songs simultaneously, they were now playing, if not the same song, at least in the same key and tempo.

As I was reciting my little sonnet I hadn’t been particularly aware of anything visual, but now my eyes had cleared somewhat, and I looked out at my audience through those slowly drifting cumulus clouds of tobacco smoke.

Some were openly sobbing; a few, both men and women, had even fallen to their knees; some sniffled; others gasped, as if bravely, trying to choke back the outward display of raw emotion; people dabbed at their eyes and noses with handkerchiefs and shirt-sleeves and Kleenex. Emily stood there with tears coursing down her face, her shoulders shaking. Julian took his display handkerchief from the breast pocket of his blazer, shook it out and handed it to her. She wiped her eyes and blew her nose. I noticed that Nicky, Edward R. Murrow, John Cameron Swayze and Ralph Edwards were all simultaneously offering handkerchiefs to Pat and Carlotta, who each took two.

Maxie still stood practically right in front of me. He had removed his sunglasses, and he mopped his cheeks with his cap.

Then I heard that same old buzzing, and I felt the tiny sentient creature land right inside the intertragic notch of my right ear.

“Great,” whispered the fly. “Swell, pal. And now that you’ve depressed the hell out of everybody, what are you gonna do for your next number?”

(Not a dry eye in the house! But don’t worry, continued here.)

(Please turn to the right hand side of this page to find a purportedly current listing of links to all other publicly accessible chapters of Arnold Schnabel’s Railroad Train To Heaven©. Yet another trove of Arnold’s notebooks has been discovered underneath a pile of old issues of the Catholic Standard & Times in the disused coal chute of his mother’s house at B and Olney in the Olney section of Philadelphia, so God only knows when this will all end. This project made possible in part by the good people of Xe Services LLC : "We may have changed our name, heh heh, but we’re still the same old Blackwater -- so if you’ve got the money, we’ve got the guns!”)

Finally, cartharis! How I have needed this! And, if "the whole world" doesn't need it now, Arnold followed by the Bee-Gees (Robin Gibbs?)are mos def gonna give to 'em.

Aww, thanks. Kathleen. I've always loved that song, and it seemed to fit here...

Arnold, finally getting the validation for his work that he's wanted all along.

I love that song. One of my old childhood dentists always played the Bee Gees. If being at the dentist didn't have me crying, that song usually did.

It's funny, Jen, but just as soon as I put up this clip of Robin here and on my Facebook page all the Bee Gees fans started cpming out of the closet!

LOL! Funny! My dentist came out of the closet right around the same time he started playing the Bee Gees. :)

Even Beelzebub can't keep Arnold down!