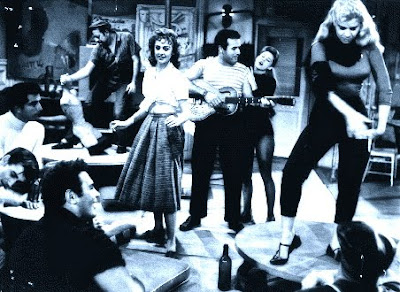 On February 2, 1960, the New York firm Smythe & Son published Ye Cannot Quench, the first novel of Gertrude Evans (subsequent author of many other titles, such as A Dream of Fair Men; Rainstorm in Rangoon; The Willing Slave; Mambo Fever; and Up Two Flights and Down the Hall). The 978-page book topped out at number 72 on the New York Times bestseller list, and this edition has been out of print since its second printing. The following year Hi-Tone Books republished the novel in paperback, drastically-shortened and retitled I Came I Saw I Conquered; this edition too was out of print within a year. This saga of young love and lust in the big city might have gone forgotten for centuries were it not for our ongoing publication of Railroad Train to Heaven©, in which Arnold Schnabel describes in chilling detail his transformation by the price of darkness into a character in Miss Evans’s novel, the handsome “beat poet” Porter Walker...


Freddy had reseated himself on his stool with his accordion. I nodded to him, since he apparently knew me. He smiled and squeezed out a merry chord.

I took my position before the microphone stand.

“Good to see you again, handsome,” said Ursula, standing to my left, this tiny old woman with her large saxophone.

“Always good to see Porter,” said Magda, over her shoulder, and, using her left hand, she tinkled the high keys of her piano.

“Keep your frock on, darling,” said Ursula. “Only possible thing worse you could do than hooking up with a musician would be a poet. No offense, Porter.”

Without looking at her instrument but looking at me with half-closed eyes Magda tickled the keys of her piano again with her elegant long fingers.

“I like him too,” said Ursula. “But he’s not the sort of man a smart girl marries.”

“I never said I wanted to marry him,” said Magda.

Gabriel blew a single note from his trumpet, a note that blossomed into the room like a spurt of blue ink in a pool of water, the bongo man answered with a flurry of taps like a handful of marbles thrown against a wall, and the bass man thumbed another deep note that pushed the cigarette smoke up and away over the heads of our audience.

“Yeah, go, daddy,” yelled someone else.

“Good evening,” I said, into the microphone, and I heard my voice booming through the crowd. “I should like to read to you now a page or so from my new epic poem, titled The Brawny Embraces, soon to be published by Smythe & Son and available at better book shops everywhere.”

I was amazed at how well my voice sounded, how calm and euphonious, and then I remembered that I was someone else, someone who spoke with the trained confident voice of an actor, not someone who spoke as I had my whole life, i.e., in a halting and quite often nonsensical mumble.

“Go! Go, daddy!” someone yelled again, which was really getting annoying, to tell the truth.

And suddenly I had an awful stabbing memory of the one other time in my life that I had read my poetry aloud. A Catholic women’s club back home had set it up. It was in this local bookshop, McGrath’s, on 5th Street, on the second floor. On a rainy cold Tuesday evening I read my bad poems to a bunch of desperate-looking ladies. When I had finally finished they clapped and looked less desperate. They all shook my hand. Finally I escaped and ducked around the corner to the VFW and had a quick Four Roses with a mug of Schmidt’s, and I swore never again.

But here I was.

I raised up that thick sheath of typescript and looked at the top page, I adjusted the microphone on its pivot to a more comfortable angle, and I spoke:

Yea, you people ask me,
Yes, you wearers of the button-down Arrow shirt,
As well as you sporters of the black beret
And the Greek fisherman’s cap, you all ask me
Why? Why do I write and for whom and from whence?

For the great pounding sea I write
For the black blinking sky I write;

For the dirt in an empty lot
For the broken beer bottles there
For the weeds that force themselves
Up through the dirt and broken glass
And into the stench of a bright sun-blasted day;

For the cracked sidewalk outside my building
For the gutter and the butts and chewing gum in it
For the filthy bricks of my tenement
For the creaking wood of its stairs
For its smell of rotting food and of sweat,
For the peeling wallpaper in my pad
For the roaches that scurry across my cracked linoleum
For the linoleum too
And for the ancient newspapers that lie beneath it
Cracked and brown and covered with dead words and with
Faded photographs of the dead,
And for the moldy wood that lies beneath that,
For the termites in the wood
For the termites’ dream of the world
For the world’s dream of a termite
For the air in front of my face
For just about anything I write
Even for human beings
You strange creatures who walk along these sidewalks
And occasionally with whom I exchange words
Yes, even for you I write
But mostly I write because I must
Just as I must eat and drink
And perforce must defecate and urinate
Just as I must sleep and then awaken
Just as I must breathe
As well as sometimes cough or belch or fart.
Just as I must someday die.


This seemed like maybe a good spot to quit while I was still ahead.

I lowered the sheath of poetry and stared out at the crowd.

“Go! Go, daddy!” and various permutations of those two words were again shouted, and it sounded as if several more people had joined the chorus.

Even Ralph Edwards and Edward R. Murrow and John Cameron Swayze had gotten up and come over to the performing area, along with Carlotta and Pat, and Nicky, although I didn’t see Emily.

Pat put two fingers in her lips and let out a great shrill whistle.

Over at the bar Bunny was yelling “Bravo!”, while Betsy just sat there with her lovely legs crossed, smoking and looking at me.

I realized that the whole band had been playing jazz music behind me, and that they were still playing.

Ursula drew the saxophone’s mouthpiece away from her lips and tapped me on the arm.

“Give them some more, Porter,” she said. “They’re eating it up.”

I raised the sheath of epic poetry again, and read:

I who have not the faintest idea
Of the meaning of anything
Will speak much of the meaning
Of everything;


“Regardless!” yelled Emily, shoving her way through the crowd again with what looked like a fresh drink. “I meant to red-pencil that ‘ir’!”

Will speak much of life, regardless.

“Who you calling doll-face, shrimp?” said Emily, and she swung her purse at his head, hitting him on the ear. He staggered backwards into the crowd and she went after him, drawing her purse back again. Fortunately Ralph Edwards jumped forward and grabbed her by the waist and she just missed Maxie with her second swing.

“No little homunculus is going to call me doll-face,” she said, struggling and kicking.

“I’m sure he meant nothing disparaging,” said Ralph, gripping her tightly and smiling with gritted teeth.

Two or three other shoving matches had started up in the area that Maxie had stumbled into, people shouted angrily, the audience now buzzed and swarmed within itself like a hornets’ nest that a child has poked with a stick.

“You think I should?”

“Sure,” he said. “Best way to settle down a bar brawl is just to keep playing as if nothing is happening.” Which indeed he and rest of the band had continued to do.

I lifted up that heavy stack of paper again and read, loudly and firmly:

I will speak much.


I looked up from the poem. The band played on behind me. The scuffling had quieted down. The people all stared at me. Maxie was back in the front row, holding a bleeding ear, but he looked content. Even Julian had finally got up from his bar seat and come over, probably to keep an eye on Emily, whose arm he held, keeping her at a safe distance from Maxie.

(Continued here, because I have a mother and two bartenders to support.)

(Kindly look to the right hand side of this page to find what we hope is a reasonably up-to-date listing of links to all other publicly available chapters of Arnold Schnabel’s Railroad Train To Heaven©; grateful thanks to the Arnold Schnabel Society for access to the Arnold Schnabel Archive in the basement of the Olney Branch of the Free Library of Philadelphia; special thanks for the sponsorship of Evan Williams Bourbon™: ”The bourbon that quite decidedly does not taste of old shoe leather.”)
Posted by Dan Leo at 12:34:00 AM

He should keep the 'ir".
In my opinion.

Ya can't beat that.
His timing's sophisticated and fascinating and his voice swoops high and dips low.

Di and Kathleen, if only you two could have been there at the Kettle of Fish that night!

I found myself snapping my fingers while reading. :)

woo hoo!
I hear American in that voice.
Has the document survived?

Yes, Manny, fortunately the Arnold Schnabel Society is in possession of all relevant documents.

Not for nothin', but that Porter's deep.