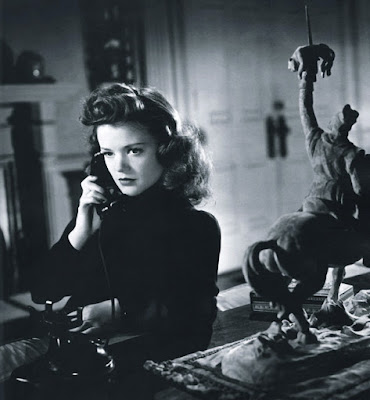 It is the year 2003, the sun has gone down over the Pacific Ocean and a fine spring evening has settled upon the town of Hollywood, where the Technicolor flickering of a large-screen television set pulses from the living room windows of a certain Great Depression-era Mission/Tudor house on North Ivar Avenue...

(Click here to see our previous chapter; new arrivals anxious to find out what all the media fuss is about may click here to return to the first chapter of Uncle Buddy’s House©. Rated R for Meandering Dialogue.)

That night Buddy sat with Liz and Philip and Deirdre watching All That Heaven Allows on DVD when his cellphone rang. He had it right next to him on the end table and he picked it up before the second ring.

“Tell her I say hi too,” said Deirdre.

Buddy decided the kitchen wasn’t far enough, so he went through it and out to the back and stood by the pool.

“Okay,” she said, not sounding very okay. “What were you doing?”

“I just got off the phone with my father.”

“I called him last night, and I gave him my number. I shouldn’t have. Now he’ll keep calling me.”

Buddy stared down at the unlit pool water.

“He wants me to ask you to have lunch with him and Joan on Saturday. He said he invited you but that you didn’t seem really enthusiastic.”

“He got that right.”

“Why does he want to have lunch with you?”

“He claimed it was all Joan. That she wanted to establish a relationship between you two, since you’re both father-figures for Deirdre.”

Now she didn’t say anything.

“So what did you tell him?” asked Buddy.

“I said I wasn’t going to ask you to do anything. I said you and I were friends and that’s it. And he said if we were friends then why couldn’t I ask you.”

Buddy looked at the water.

“Buddy, why is he being so weird?”

“Oh. And he would still get Joan to let Deirdre stay with you?”

“Again, I can’t say for sure, but I think he’s hoping I’ll give him parts in my movies, help his career. You know, he thinks I got you this part you’re playing now.”

“How could he be sure you would get him parts?” she asked.

Another of their pauses here. The pauses were nice, silence was nice. Then:

“If you didn’t come through he would get Joan to demand full-time custody of Deirdre.”

Yeah, sure, but here was the nice thing about saying nothing, it meant at the very least you weren’t talking bullshit for once in your life.

Buddy could hear or imagine he could hear her lighting up, inhaling and exhaling.

“I’m not gonna do anything. I’m sure as hell not going to eat lunch with the devious motherfucker.”

She made a sound that stood in for a laugh.

“Did he offer to make one of his signature dishes?”

“Yeah. Pompano, pompano with some shit or other --”

“You don’t know what you’re missing.” He listened, while she said nothing for a few moments, smoking her cigarette. Then she said, “When this show is over I’m going to take my money and move back to New York.”

“I don’t even want to live in the same city with that man.”

“He’s an asshole all right.”

A few more seconds passed. Then she said:

“Y’know, everybody here is really nice to me, even weirdo Joe, but you know what? I don’t feel like a movie star.”

“But I do feel fat. All I do all day is graze off craft services like some greedy cow. I can’t help myself. By the time I do this nude scene I’m going to look like a blimp.”

There was more quiet and then Buddy said, “I love you, Cordelia.”

“Sorry. That just came out.”

“Absolutely. I was just being an idiot.”

He stood there with the phone pressed so tight to his ear that he realized his ear was hurting, and he let up on it a little bit.

“I should go to sleep,” she said. “I have an early call tomorrow.”

A half hour later, Rock Hudson and Jane Wyman were having trouble with their relationship, Buddy’s cellphone rang again, it was her name on the screen, he quickly got up and went into the kitchen before the young people could say a fucking word.

“No, it’s okay.” Through the kitchen, out the door.

“Okay.” Staring up, at the hills, the lights, at nothing.

“Okay, there’s this guy on the crew, I think I told you about him when I was drunk.”

“Well, I sort of said I would be at this bar tomorrow night where he said he would be.”

“Well, not really, because it’s this bar that a lot of the company go to.”

“I’m pathetic I’m so not a slut. I’ve hardly ever even had sex.”

“Do you wish I hadn’t told you this? I mean about the guy.”

“Yeah, I mean I wouldn’t be talking about it if I didn’t like him.”

Neither of them said anything for half a minute. Then:

“You need to have an affair with a woman nearer to your age.”

He didn’t tell her about Marjorie.

“You mean good I’m getting off the phone or good I’m going to try to sleep.”

Somehow Buddy didn’t say anything to this, and she in turn said nothing to his saying nothing. But he kept the phone to his ear. He looked up at the hills, at all the thousands or millions of lights in the hills.

“What are you doing?” she said.

“I’m sitting out back by the pool.”

“Nothing. The hills. What are you doing?”

“No. But there’s enough light from the window for me to see my feet.”

“Uh, thanks for calling.”

“But I interrupted your movie again, didn’t I?”

“Yeah, but I can watch a movie any time.”

“You’re still there,” she said.

“Let me listen to you breathe,” she said.

Buddy adjusted the phone, and breathed for a while.

“Now let me listen to you breathe,” he said.

He listened for a minute.

“By the way, what are you wearing?” he asked.

“A t-shirt. And panties. Do you want to have phone sex?”

“Okay. Well, I’m really gonna get off now. I have to get to sleep soon or I’ll look like shit tomorrow.”

Then the silence of the cellphone hang-up.

Buddy took the phone away from his ear and folded it up. Then he got up, went back into the kitchen and straight to the bourbon bottle.

(Continued here, after Buddy sobers up.)

(Please go to the right-hand column of this page to find an up-to-date listing of links to all other available chapters of Uncle Buddy’s House™. Filmed with union crews in Los Angeles, California.)

Sad and beautiful but like nothing else. Bad enough that time breaks your heart but the simple difference and sum of age has to trip you up too.

Thanks, Kathleen, as always. And, yeah, I just had to bring out the Vic Chesnutt video. Someday I'll make another one of these little clips, if only I can ever remember how I did it the first time...