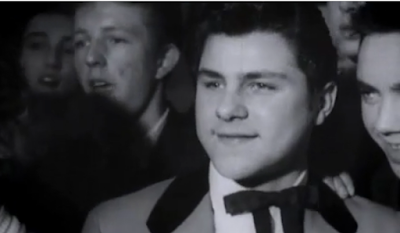 Let us rejoin our hero Arnold Schnabel (still trapped in the fictional persona of the bohemian poet “Porter Walker”, a character in Gertrude Evans's Ye Cannot Quench, a now sadly-obscure novel about a young woman coming of age in the literary milieu of 1950s New York City) in the men’s room of the Café San Remo in Greenwich Village, deep in conversation with a fly...

(Click here to go to our previous episode, or go here to return to the first chapter of this Gold View Award™-winning multi-volume memoir. “Schnabel manages not only to achieve Proust’s goal of recapturing time, but also to render the very notion of time as meaningless.” -- Harold Bloom)

Great, I thought. Everybody always has a story. Even a fly.

“So, you want to hear all about how I became a fly?” asked the fly. “It is a cautionary tale. And one not without its metaphorical and symbolic significance.”

I’m afraid I only barely attempted to suppress my immediate response, which was a sigh of what might have been interpreted as prospective boredom, and which in fact it was.

“What? You don’t wanta hear about it?” said the fly.

And, if a fly can be said to look hurt, then, well, the fly wore a hurt look on his face and in his multitudinous eyes.

Which is exactly what I did want him to do. But of course I didn’t say that.

For a moment I thought I was finished but a brand new and healthy stream came gushing out of me.

“Y’know, I can see by your mode of dress that you are probably a literary man,” said the fly. “A poet probably. Am I right?”

“I thought so. Well, then, let me suggest this: perhaps after you hear my story you could then take it and turn it into a grand epic poem --”

“Or it doesn't have to be a poem, it could be a novel. Or maybe even a movie. Or both. Kinda like Gone With the Wind or From Here to Eternity. Except instead of about the Old South or the army it’s about a fly.”

“Believe me this story has all the elements of classical tragedy --”

“The thing is I really don’t have all day,” I said.

I was hoping that my bladder was finally emptied, but no, there still seemed some more in there --

“It’s what? You don’t wanta be seen talking to a fly, right?”

I gave my purported organ of procreation an encouraging shake.

“And partly like you just don’t give a damn,” said the fly.

“Well, no, I give a damn,” I said, although to tell the truth I only gave the tiniest possible portion of the smallest possible damn.

“But look,” I said, “the thing is I can’t really stand in here all afternoon.”

A final spurt came from me, at least I hoped it was final.

“You finished there?” asked the fly.

“Yes, I think so,” I said, giving it one last shake just to make sure.

“By the way, if I may be so bold as to say so, I am detecting something more exalted in your micturition than the Rheingold and Schenley’s I usually get in this joint.”

“Well, I had some wine,” I said, finally putting the damned thing away and zipping up.

“No kidding? The French stuff?”

I went over to the sink, and pressed some soap into my palm from the wall-mounted dispenser. The fly flew over and landed on top of the dispenser.

“What kind of wines were they exactly?”

He could really be very rude for a fly.

I turned on the water.

I started to wash my hands.

“Jesus Christ, and you didn’t even know what you were drinking.”

“No kidding. I’m afraid to ask what the red was.”

“Maybe you’d better not then,” I said.

I looked at the face in the mirror, this young and very good-looking fellow; he didn’t look like me, but, judging by what what was going on with him, he was me all right.

I turned off the taps, gave my hands a shake into the sink. Even my hands were better-looking.

“Do not tell me you were drinking Pétrus,” said the fly.

I went over to the towel-roller thing on the wall and pulled out a section of clean cloth. The fly flew over and landed on top of the towel thing. He just wouldn’t leave me alone.

“No,” said the fly. “Please, seriously. Do not tell me you were drinking Pétrus.”

“Christ.” He rubbed his little legs together. “How was it?”

“Yes, the fucking Pétrus, how was it?”

“What a waste. What an incredible fucking waste.”

My hands were dry. I let go of the towel.

“But wait, you said you were gonna listen to my story.”

“I was going to,” I said. “But instead you wanted to know what wine I was drinking.”

“I have friends waiting for me.”

“I used to have friends.”

“Well, look, maybe some other time,” I said.

“I know, you got your friends waiting.”

“I know. Believe me, I know. It’s okay. Go. Go already. Join your precious friends who probably have not even noticed your exalted absence.”

“If we were in your apartment.”

“You live around here?”

I started to turn toward the door.

“No, the fucking door. What’s your name.”

“What is it, Arnold or Porter.”

“You forgot to flush the urinal you know, ‘Porter’.”

“Oh, I’m sorry,” I said, and I started to go over to it, but the fly flew in front of me and hovered in front of my face.

“Half the jerks come in here don’t bother to flush.”

“Well, I always do,” I said, and I started to step forward again, but this time the fly flew at me and actually bumped against my nose.

“I said don’t flush it for Christ’s sake.”

I turned and walked the couple of steps to the door, opened it to the noise of the bar and the voice of Perry Como on the juke box.

Before stepping out I looked back over my shoulder.

The fly had flown over to the basin of the urinal and was enjoying the dregs of the Chevalier-Montrachet and Pétrus which I had left there.

(Continued here, and until the men in the white coats finally arrive.)

(Please consult the right hand column of this page to find a stringently up-to-date listing of links to all other available chapters of Arnold Schnabel’s Railroad Train To Heaven©. “Indeed one must reach all the way back to the Bard of Avon himself to find a poet in the English language who contained so many and such rich universes within himself.” -- Sir Kenneth Clark)

Arnold never fails to send my mind to strange and engaging...dimensions(might not be the wrong word.)
I'm anxious to hear the oenophile fly's story, and worry that flies have a very short life span.

Ha -- I think you're much nicer even than Arnold, Kathleen. He didn't seem all that terribly interested in the fly's story...

I was wondering about the fly's lifespan too. But on the other hand, even if his lifespan is only a day, we've learned that a day in Arnold's life can be a very long time...

Everybody always has a story. Even a fly.

I want to hear the fly's story... and then I was wondering whose voice he'd have. I first heard him as Jack Black, but by the end he had turned into Steve Martin.

Ha -- I love Jack Black as the fly. Let's get his agent on the horn right away, Jen!

I don't know...I want to wash my hands after that one. Though the fly as wine snob is pretty good.

Manny: All Employees Will Please Wash Their Hands Before Returning to the Dining Room!

(By the way, I think that maybe this is what happens to all wine snobs in the afterlife.)