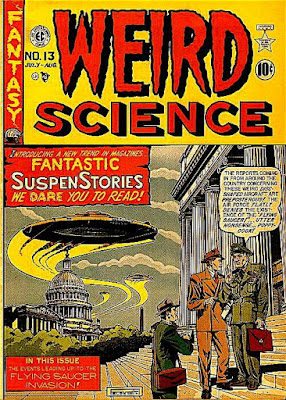 Larry Winchester, acceding to an onslaught of cards and letters from his fans, returns again to two of his more beloved characters, Captain Alexis Pym (USN) and Big Jake Johnstone, on this historic night in September of 1969, in the wasted New Mexico desert some several miles outside of a town called Disdain…

(Go here for our previous chapter, or here to go to the beginning of this novel, which Harold Bloom has called, “perhaps the greatest novel of our time, or, fuck it, any time”.)


Pym had a few seconds to think as the great warm body of the spaceship pressed him down into the sand.

He thought, fondly, Dick tried to save me.

Then, embarrassed, he remembered saying “I love you” to Dick. If only it had been something like “Thanks for trying, fella!” or “Thanks anyway, Dick, see ya around!”, or even better, “Au revoir, tout le monde!”

If only Dick had saved him. Perhaps they could have become real friends. Perhaps he and Daphne (whom Pym had never had the privilege to meet, but he was sure she was charming, delightful), perhaps Dick and Daphne might even have come for a visit to Pym’s split-level in Virginia. Dick and he could watch football while their wives baked pies, and, perhaps their knees would have lightly touched as they leaned forward to watch some particularly interesting play, that would have been enough, perhaps, maybe, but no, no, that wouldn’t have happened…

Then Pym began to asphyxiate in earnest, and unfortunately he spent his next few moments in panicked pain, which at last subsided as he slid down into unconsciousness and death, all this final little time longing for life, and, oh, forget about the pork chops and the call girls and the friendship with Dick that could never happen, yes, give him back even the wretched life he had lived, send him back to the warren, to those happy intense hours rooting and grubbing in Ridpath’s desk, oh if only...


I guess there is a good Lord up in Heaven and I reckon he did answer my prayer, ‘cause that flyin’ saucer just bounced right over my vehicle, I could feel it brushin’ the top of my hat, and it went right on skiddin’ and bouncin’ across the desert toward Dead Horse Mesa, and there was some weird kinda suction thing goin’ on, tryin’ to drag my Caddy and me right after that damn thing, but I just pressed that pedal to the metal and pulled that steerin’ wheel hard to the left with all my might, damn near turned that automobile over, too, but finally I got all four tires back down on the dirt, that engine squealin’ like a gut-shot elephant, and I roared on outa there and gradually I felt the pull of that infernal suction slackin’ off, and I just kept on goin’.

Kept on goin’ and I didn’t stop till I was maybe a mile away. And then when I looked back across that dark starlit desert that big ol’ flyin’ saucer was gone, and I reckoned that it had just slid into the sink hole there and disappeared forever beneath the sand.

So I took out a cigar with a tremblin’ hand and bit off the end and lit it up to steady my nerves and then I had a couple or three good hits of Jack Daniel. Then I had me another one.

If I had had some of the Doc’s medicine I woulda took a couple three good swigs of that, too, believe you me.

Some experiences just ain’t meant to be took straight.

(Click here for our next thrilling chapter. And please go to the right hand column of this page for what purports to be an up-to-date listing of all other extant episodes of Larry Winchester’s A Town Called Disdain™, currently being serialized on the Comet Cleanser Dramatic Showcase, on the DuMont Television Network (where available), featuring Farley Granger as Pym and Burl Ives as Big Jake.)

Big Jake is a prince among men.

I keep thinking Big Jake is gonna surprise us with an accidental act of honor.
Pym's death is original--no rage or lurid denouncements; just a few simple wishes.
How many people do you think go out like that? Their mind in tact, no fear or even curiosity other than what they'll miss on TV. Maybe that's an act of accidental honor.

You pose an interesting question, Kathleen. The one most unique moment of our lives is the one that we don't (usually) get to look back on retrospectively.

Nobody knows remains my mantra on this. But the question always makes me think of Billy Collins' poem "The Art of Drowning," where he protests the idea of life flashing before your eyes.

"...Your whole existence going off in your face
in an eyebrow-singeing explosion of biography--
nothing like the three large volumes you had envisioned."