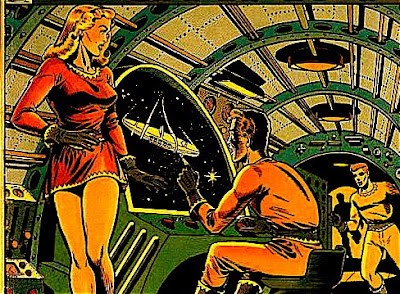 Larry Winchester, that “literary Frank Gorshin”* here switches effortlessly from the folksy drawl of the pusillanimous rancher Big Jake Johnstone to the urbane badinage of those adventurers-without-portfolio Dick and Daphne Ridpath, and then dizzyingly back to Jake again...

(Go here to review our previous chapter, or here to see where the whole tragic tale began.)

Well, lemme tell ya now, if you got a spaceship comin’ at ya hell bent for leather from one direction and a pack of drug-addled bloodthirsty machine-gun-totin’ motorcycle banditos comin’ at ya from the other direction, well, t’ain’t but common fuckin’ sense to skedaddle sidewise but pronto.

So that’s what I did, sir, I just wheeled that Cadillac right and peeled outa there mucho pronto, Tonto.

Trouble was that ol’ flyin’ saucer just kept headin’ right after me! I could see it plain as day in the rearview mirror. Comin’ right after me it was. I didn’t know why it wanted me. I never done it no harm. Never done no man no harm. Nor no outer space man, neither.

****
“I had no idea what I was doing. No idea. Out of one eye I could see on one TV screen Enid and Hope trying to get the English fellow out of the station wagon, while on another screen I’m getting the bigger picture -- motorcycle gang approaching, Big Jake hightailing it out of there in his Cadillac -- and that’s when it really got crazy. I grasp the general situation and figure, okay, I guess I’ll try to land in between Hope and Enid and the motorcycle gang. I figure this has got to scare them away -- but the problem being as I say I don’t really know how to land the damn thing and I’m none too adept at steering it, either. I mean we’re swerving all over the place, up, down, sideways.”

“That’s when Brad got into the act again,” said Mrs. Ridpath.

“Right. I’d been so preoccupied I had almost forgotten about friend Brad, who’d been duly administering to Mac and Buddy, but suddenly I guess he realized what a botch I was making of things.”

“Yeah. I’m getting up to let Brad sit, and Brad’s sitting down, and in that transition we somehow lost control...”

What could I do? Skedaddlin’ to the right didn’t work so I wheeled around one-eighty again, and wouldn’tcha know that bastard was still on my tail, so I figured, fuck it, wheeled left and realized right away I was headin’ straight for that pack of motorcycle scum.

Zoomed right by the station wagon, seen they’d got that English punk outa the car, but I didn’t care about that neither, and them motorcycle fellas was headin’ straight on hellbent for leather even though that goddam’ saucer was still hot on my trail -- hell, I guess them biker guys was just too high on drugs to know any better -- and about one second later I’m drivin’ right into their midst, and I’m screamin’ and yellin’, ‘Outa my way, you sons o’ bitches, ‘cause this is one heap of American-made vehiculation that ain’t stoppin’ for nobody or nothin’!’

And I wanta tell ya, them boys an’ their bikes just parted like the Red Sea parted for God’s Chosen People. Oh, you better believe I bumped a couple or three of ‘em, and they went flyin’, cartwheelin’ an’ screamin’ behind me, but I didn’t give a flyin’ fuck in the wind, no sir. Hell, they shoulda just got out of my way!

(Continued here. In the meantime feel free to look to the right hand side of this page for what purports to be an up-to-date listing of links to all other recovered chapters of Larry Winchester’s A Town Called Disdain™, third-place prize-winner of Good Housekeeping’s Sprawling Epic Award.)
Ray Charles: hit the road, Jack!

‘Outa my way, you sons o’ bitches, ‘cause this is one heap of American-made vehiculation that ain’t stoppin’ for nobody or nothin’!’

Only big Jake talks like that. Everybody in Disdain has his or her unique style. The way things oughtta be.

Big Jake is the man!

You know, this could be an excellent HBO series -- if Larry Winchester were willing to work for the smaller screen.

"I go where the money is." -- Larry Winchester, on "Late Night With Jimmy Fallon".

Larry is currently in negotiations with HBO for a series, but, as usual, he is demanding total artistic control and "final cut", so we'll see how that goes...

Larry's got cojones, that's what I like about him.