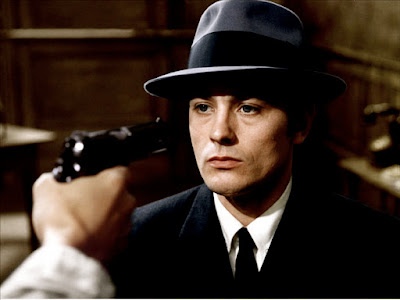 Larry Winchester*, master of montage if not meaning, now returns to the embarrassing plight of that villain we love to hate, Captain Alexis J. Pym of the Unites States Navy’s mysterious “Q Section”, last seen (in Episode 114) buried up to his chin in sand beneath a mesa in the atomic bomb-blasted desert several miles outside of a town called Disdain, NM, on a September night in 1969...

(This episode rated EL for excessively lurid prose. Click here to see our previous chapter or here to see how the whole epic started.)


The motorcyclists had drawn up their bikes to the curving bank of the sinkhole and their headlights lit it brightly.

The only flaw in its smooth silvery surface was the head of Pym, still wearing his tan naval officer’s cap.

“Who dat?” asked one fellow.

“It’s a head,” replied another.

“What do you think I’m doing?”

The Motorpsychos were stumped, silent but for the purring of their idling motors.

“Let’s shoot the head,” yelled one of the Motorpsychos.

Another of the gang obligingly took a shot with his Luger but missed by several yards.

“Fuck you!” yelled Pigmind, and he fired several more shots, all misses, until the gun was empty.

All the other Motorpsychos laughed.

“I am a United States naval officer!” called Pym.

“Sailors suck dick,” yelled back one of the Motorpsychos, and all of them laughed.

Pym had no reply for this. It was true, some sailors did suck dick. Not all, but some. It was a tradition among seamen that probably went back to the first long voyages of the Phoenicians. Men needed an outlet on long sea voyages in cramped quarters with no women. Undoubtedly even those paragons of masculinity the Vikings had availed themselves of their own hearty brand of rough-and-tumble homosexual sport --

“Let’s take turns shootin’ at him,” suggested one Motorpsycho.

This was not a good way to die. A fitting way to die perhaps, but nonetheless…

One fellow on the far left raised a long-barreled revolver and began cracking off shots in the direction of Pym’s head.

Pym tried to think of some suitable terminal thought, but thought of nothing.

Which is what I soon shall be, he thought.

But it would have to do.

(Continued here. Kindly look to the right hand side of this page to find a soi-disant up-to-date listing of links to all other extant episodes of Larry Winchester’s A Town Called Disdain™. Be sure to pick up your complimentary “Town Called Disdain” lunchbox with the purchase of ten hot dogs with sauerkraut at any Kresge’s 5&10 lunch counter, while supplies last.)

Pym, who sometimes seems so tormented, shows such acceptance here. (His ruminations about the Phoenicians and Vikings are master's strokes.) But if quicksand up to your eyeballs doesn't induce tranquil surrender, what will? Still, cutting the scene with him alive but going down leaves me anxious.

Hey, it ain't over till it's over!

“What do you think I’m doing?”
The Motorpsychos were stumped, silent but for the purring of their idling motors.
“You fools,” added Pym.
“Let’s shoot the head,” yelled one of the Motorpsychos.

Reminds me of the old Funkadelic record, Maggotbrain.
But I am still hoping for the best for good Pym.