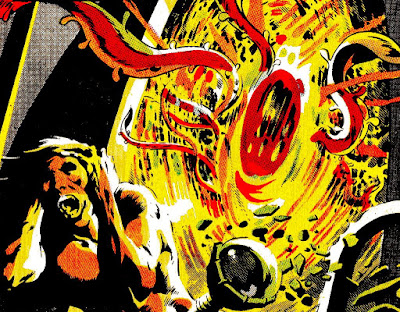 “...the one single author who out-creepies Poe, who out-confesses Augustine, who out-sensitives Proust, who out-epics Homer, who out-geniuses the Bawdy Bard himself: Arnold Schnabel.” -- Harold Bloom, in conversation with Oprah Winfrey.

Previously in this Catholic Standard and Times Award-nominated memoir:

Arnold with his friend Dick Ridpath and the aged shopkeeper Mr. Arbuthnot wander (through the mysterious agency of the Book of Time) a Cape May stopped exactly at 10:08:14 PM on the 10th of August, 1963.

Unfortunately Mr. Arbuthnot’s cat has begun to attack the open book, thus endangering all of existence...

“Quick,” said Mr. Arbuthnot, knocking the contents of his Meerschaum out against the railing, “we have to run!”

And, shoving the pipe into his pocket, off he shuffled back down the pier alongside the convention hall.

Dick and I traded the briefest of glances, like “What next?” and then Dick tossed his cigarette away over the side railing, and off we went running after Mr. Arbuthnot.

In about one second we were up to him, and I think both Dick and I realized at once that Mr. Arbuthnot's version of running was roughly equal to what we ourselves might consider a slightly brisk stroll.

“Hurry!” cried Mr. Arbuthnot, already getting out of breath, and as if Dick and I were the ones who were slow. “He’ll kill us all, the little bastard!”

Indeed the wooden planks of the pier were buckling and almost rippling like stormy waves themselves and the air shrieked as if the heavens were being torn in two.

Without thinking about it I scooped up Mr. Arbuthnot in both arms and carried him along, running with Dick by my side.

We made it down the steps from the promenade and ran across Beach Drive with its immobilized stream of cars now trembling and bouncing like the cars in a toy-train village laid out on a table which was being shaken vigorously by a naughty child.

He probably didn’t weigh too much more than a hundred and twenty pounds or so, and I’m in pretty good shape, but, still, you try running with a hundred-and-twenty pound old guy in your arms some time and see how soon you get out of breath.

I made it down the block almost as far as the miniature golf course on the corner of Ocean Street and then I started to falter.

Dick saw my condition and opened his arms; without a word I passed Mr. Arbuthnot laterally to Dick in mid-stride, and without losing a step he swung the old fellow over his shoulders like a large doll and trotted on.

Dick ducked through the entrance and we dashed through the links, leaping little streams and fairways and ponds and sandtraps, bounding over the roof of a Taj Mahal, trampling the stunted trees of a Japanese garden, leaping the moat and towers and battlements of a medieval castle, and finally vaulting the fence on the Ocean Street side.

A sound like God sneezing shook the earth again and suddenly everyone on the sidewalk started walking backwards while all the cars on the street went by in reverse.

“Oh no” cried Mr. Arbuthnot, upside down over Dick's shoulders, “Shnooby must be scrabbling the pages backwards! If we don’t hurry he could change the whole course of history!”

“Well, you already said he could destroy the universe,” panted Dick.

“And he might still do that! My God! Hurry!”

Suddenly the earth seemed to drop several feet in space and then the cars and people began going forward again, but now at thrice their normal speed. Dick and I now had to dodge the trampling hordes of tourists as if they were some hideously numerous and fleetfooted football team determined to trample us underfoot.

One woman whacked me with her red plastic handbag and sent me almost tumbling to the gutter, but I stumbled on, and then with a great hiccoughing sound and another titanic lurch all the people and cars froze in their tracks again.

“Christ!” muttered Dick, stumbling and losing his hold on Mr. Arbuthnot who flew backwards flailing his arms and legs, but I managed to bend down and scoop him up in my arms before he hit the pavement.

I tossed him over my right shoulder, Dick gave me a clap on the arm, and on we ran down Ocean Street and across Columbia Avenue.

Dick and I passed off Mr. Arbuthnot again as we reached Hughes Street, and as we ran on I looked up through the trees and saw those immense marbled eyes the color of warm peach Jell-O looking down at us impassively from the nighttime sky.

Mr. Arbuthnot by the way had continued to yell variations of “Faster!” through all this. As we got to Washington Street, Dick, who was again carrying Mr. Arbuthnot over his shoulders, said, “Okay, Mr. Arbuthnot, I get it! Now shut the f**k up.”

“You sailors and your language,” huffed Mr. Arbuthnot and that awful ripping noise screeched through the air again.

Looking up I saw an enormous paw descending upon us.

“That’s it, we’re all dead!” cried Mr. Arbuthnot, and indeed the earth now shook more mightily yet. Looking up and back I saw the cat’s paw tapping the square bell-tower of Our Lady Star of the Sea Church, trying to decide whether to knock the whole thing down all at once or in easy stages.

“Oh thank God!” cried Mr. Arbuthnot, because now, thank God (or thank my and especially Dick’s athletic conditioning) we had reached the entrance to the Whatnot Shoppe.

Dick heaved the old fellow off his shoulders and set him deftly in front of the glass-fronted door.

Mr. Arbuthnot had not bothered to lock up of course, and in a trice we were through the shop and following the old man up the rear stairs to his apartment.

I came up right behind Dick, and the room suddenly rocked violently, like a cabin in an old-fashioned ocean liner caught in the grip of a typhoon. Mr. Arbuthnot scurried into the dining room, screaming at his cat, who stood over the Book of Time on the table, one paw raised to strike again.

The cat jumped off the table and darted across the room and under an old credenza as Mr. Arbuthnot went over to the open book.

“That damned cat! Pardon my language, gentlemen, but --”

He bent forward over the book, and Dick and I drew closer, breathing heavily and streaming with sweat.

The room had stopped shaking. All was still and silent again except for the sound of our own labored breathing.

“Okay,” said the old fellow, “here goes. I must try to find the exact moment when we stopped time. What was it again, Mr. Schnabel?”

“Very well, now or never --” in the pages of the book I saw tidal waves attacking the Jersey shoreline, jagged mountains rising up from the ocean, and the burning moon descending to the earth like a cannonball, while from the great Pine Barrens all hell broke loose from fresh-torn canyons in the earth’s surface.

Mr. Arbuthnot thrust his bony finger to the page and suddenly the chaos in the book subsided, the air around us breathed and moved, we could feel the earth enter the gentle stream of time again.

Mr. Arbuthnot looked from Dick to me.

“Saved,” he said. He took his handkerchief from his breast pocket and mopped his brow, and then he closed the Book of Time.

“Now I really need a drink,” he said. “Will you join me for a quick one, gentlemen?”

(Continued here. In the meantime, please feel free to go to the right hand side of this page to find a supposedly complete listing of links to all other published chapters of Arnold Schnabel’s Railroad Train to Heaven™; all contents vetted and approved by the College of Cardinals; Nihil Obstat, Msgr. Frank X. Fahey, SJ.)

I now want this scene in a commemorative Arnold Schnabel snow globe!

"Dick ducked through the entrance and we dashed through the links, leaping little streams and fairways and ponds and sandtraps, bounding over the roof of a Taj Mahal, trampling the stunted trees of a Japanese garden, leaping the moat and towers and battlements of a medieval castle, and finally vaulting the fence on the Ocean Street side."

Fantastic, to say the least.
Interesting what suspense does to us. I felt as if I'd lost a small child on the subway. He sneaked off the car at 14th St. when we were going to Canal.

Wonderfully,deliriously hallucinogenic! And good to see Arnold as a man of action when the occasion demands.
I have to catch my breath after that one.

Manny -- Arnold as a super-hero? Who will design his costume?

Kathleen, I sure hope you're not confessing to something that will eventually turn up in excruciating detail in a tell-all memoir by one of your children!

Arnold thanks you, Anon.

And Jen, let me know as soon as you're finished with the prototype of the snow-globe.

wow* can U ever Spin a Tale Dude!!