“A Town Called Disdain”, Episode Ninety-One: a slight contretemps at the host stand 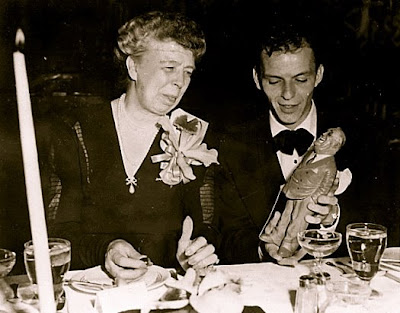 In our previous episode of Larry Winchester’s A Town Called Disdain™ (winner of the Uneeda Prize for Best Sprawling Epic), Daphne had finally had enough of Frank and his so-called Rat Pack, and she got up from their table in the Samba Room and walked off, joined by Dick and Harvey. At the entrance they are stopped by the maître d’, (Henry Silva). Frank and the Pack come up and Frank asks, “Where do you think you’re going and how do you think you’re going to get there?” A reasonable question considering that our heroes are in a massive invisible flying saucer somewhere between the Earth and the Moon.

By way of response, Daphne pulls a revolver from her purse and lays its muzzle on Frank’s forehead.


“Mrs. Ridpath,” said Frank, “leave us not do anything we might regret here.”

“Don’t worry about what I might regret, Frank. All you have to worry about is keeping your brains intact inside that fat head of yours.”

“Just say the word, Frank,” said Joey. He had his right hand inside his jacket at the hip.

“Do not move, Joey,” said Frank. Sweat glistened on his smoothly tanned face. “Do not do anything and do not say anything. In case you have not noticed I am the one who is standing here with a snubnose .38 pressed against my skull.”

“Smart boy,” said Daphne, and just then the club’s doors swung open and in walked Brad Dexter, cigar in hand.

“What the fuck,” said Brad.

“No sudden moves, Brad,” said Frank, looking at Brad out of the corner of his eye, “please.”

Brad took in the situation and then glared at Henry Silva, who still stood there with his right hand hovering near the pistol butt sticking out of his cummerbund.

“What the fuck, Henry,” said Brad, I can’t leave you alone for five fuckin’ minutes --”

“Forget about Henry,” said Frank. “Where the hell you been? You’re on the door like you’re supposed to be, maybe I’m not standing here with some crazy broad holding a gat to my forehead.”

“Control room called,” said Brad. “Emergency down on Earth. Seems that Hope chick and that Enid dame are stuck in a Mexican stand-off with that motorcycle gang, the Motorpsychos.”

“What’s this about a Mexican stand-off?” asked Dick, lighting a cigarette.

“Light me one, will you, darling?” said Daphne.

“Of course,” said Dick. “Have this one.” He placed the cigarette between Daphne’s scarlet lips. “Do you want me to hold the gun?” he asked.

Before answering, she inhaled, drew the cigarette from her mouth with two fingers of her left hand, and exhaled the smoke into Frank’s heavily perspiring face.

Dick lit a cigarette for himself and turned again to Brad.

“Dexter, Brad Dexter. I’m the manager here. And a thankless job it is, too --”

“Now what’s this about a stand-off?”

While saying this, Dick went easily over to Henry Silva and drew the pistol from Henry’s cummerbund; it was a .38 Chief’s Special.

“Them motorcycle bandits,” said Brad. “They stopped Hope on the road to the reservation --”

Dick gave the .38’s cylinder a spin, saw that it was loaded.

“What was Hope doing on the road?” he asked.

“She was trying to sneak out and join you folks at the peyote ceremony. She took her pony, called Whisper.”

Dick slipped the pistol into his waistband.

“The Motorpsychos stopped her,” said Brad. “Were gonna rape her probably. Moloch killed the pony.”

“He killed her pony?”

“I know. He’s an asshole. But then Enid comes along in her truck, she gets out and throws down on Moloch with an M1911. Beautiful. Except all the other Motorpsychos are armed to the teeth and they throw down on Enid. And that’s where it stands: a Mexican stand-off.”

“We’d better get back there,” said Dick.

“Frank,” said Daphne, “you are going to lead us right to one of your cute flying saucers and you are going to take us tout de suite straight back to New Mexico where we will deal with this little problem of Hope and Enid’s.”

“I don’t think so, lady,” said Brad. “Ya see, it seems somebody took a leak in the saucer's engine.”

“That baby’s gonna be in the shop I don’t know how long. Don’t know what it is about earthling broad piss but I’ll tell ya, lady, you fritzed up that saucer something royal.”

“Well, surely you have some other flying saucers around here,” said Daphne.

“Lady,” said Brad, “what kinda budget you think we got for a third-rate planet like this? That baby was the last operable saucer we got.”

“He’s right, Mrs. Ridpath,” said Frank. “I’ve had a request in for three replacement saucers for what? Twenty earth years?”

“Twenty-two,” said Brad. “Ever since that accident at Roswell.”

“Until we get that saucer you peed in fixed -- yeah,” said Frank.

“Y’know, you guys kill me,” said Dick. “You’re going to set us up as rulers of the Earth and you’ve only got one flying saucer?”

“Hey,” said Frank, “business is not what it used to be. New planets opening up, the fickleness of the public -- always with the new, the new, the goddam new -- plus I already told ya how expensive this operation is -- what with the overhead, the fucking unions --”

“Mr. Ridpath,” said Brad, “you know why the big brass back home want humans in on the operation now? It’s ‘cause Frank and his buddies are fuckin’ it up --”

Dick took a contemplative drag on his cigarette. The band had been playing obliviously through all this, they were now jamming on “Afro Blue”, and indeed most of the audience and help seemed unaware of the contretemps at the host stand.

“That is correct, sir. And lookit, we got all the comforts of home for ya here, Dick, a beautiful suite of rooms, swimming pool, credit line at the casino --”

(Click here for our next pulse-pounding chapter. Please turn to the right hand side of this page to find a complete listing of links to all published episodes of Larry Winchester’s A Town Called Disdain™, soon to be a major motion picture starring Richard Egan, Mara Corday, and Rory Cochrane; written, directed and produced by Larry Winchester for Realart Pictures.)

You have no idea how worried I've been about Hope and Enid!
Daphne, though, never stresses me.
Oh, and instead of a gun, I may just invest in a jamming business card.

In the right hands, Grasshopper, a business card can be a formidable weapon indeed!