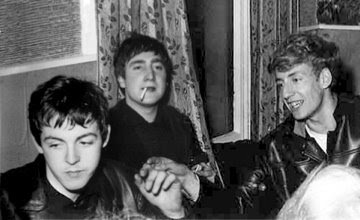 Is it already the one-hundredth chapter of our serialization of these memoirs of the man Harold Bloom has called “perhaps the greatest writer these United States have produced, and, quite frankly, I don’t see any better ones looming on the horizon”? It seems like only yesterday when we posted our first chapter, and, of course, it was in fact only six or eight weeks ago in Arnold Schnabel’s slowed-down universe.

Let us rejoin Arnold on the second-floor screened porch of the Biddle residence, in the quaint seaside resort of Cape May, NJ, on a late August afternoon in that unjustly forgotten year of 1963…

(Go here for our previous installment, or here for our very first chapter -- now enshrined on a great marble plaque at the Smithsonian Institute.)


“Do you want to go out with us, Arnold?” said Daphne.

“Go out?” I said. Again threatening neither Oscar Wilde nor Levant in the rapier wit department.

“Yeah, to get a beer or something.”

“Go ahead, Arnold,” said Mrs. Biddle, lighting a cigarette with a paper match, “keep an eye on her. Try to keep her out of jail if you can."

“What do you say, Arnold?” said Daphne.

Daphne had changed her clothes also. She wore a yellow dress, with straps, and flashes of orange light danced along the fabric each time she moved. She too wore lipstick, of a brownish red, and also eye make-up, although not as much as Sister Mary Elizabeth did.

“Do you have plans?” Daphne asked me.

Suddenly I recalled that — a circumstance which would have been incredible a couple of weeks — I actually did have plans.

“A date with Elektra?”

At last someone who got her name right.

“Good, we have plenty of time for drinks, and then you can go to Elektra. Or even have her join us if you like. You should see her, Mary Elizabeth. Stunning.”

“You’re not turning lesbian on me, are you?” said her mother.

Sister Mary Elizabeth put her hand over her mouth.

“All right, enough of this madness,” said Mrs. Biddle. “Help me up, Arnold.”

I took her proffered arm and did what I could. In her free hand she had taken up a pack of Lucky Strikes from the table, and a paper book of matches.

“Hand me that walking stick.”

Her cane was leaning against the wall near the end of the sofa. I handed it to her.

“My mother broke her leg dancing the Watusi,” said April to me.

“I can think of no better way to have broken my leg,” said Mrs. Biddle.

Somehow our small army made it down to that living room, no longer in black-and-white, but now looking somewhat like a living room from a 1950s movie, but a movie taking place in the 1930s, if that isn’t too complicated, and somehow I think it is.
Tommy suddenly loomed up from somewhere as we were all milling about in this Technicolor world suffused with all the colors of the rainbow and some others I had never noticed before.

“Going out for drinks?” he said, to me in particular. “I’m frantically jealous.”

“Come with us,” said Daphne.

“Go out? With the young people?”

This went on for a while, and a lot more seemed to go on while I stood there and smiled like an idiot whenever some sort of reaction seemed to be called for regarding what seemed like the twenty-seven conversational paths which were being trampled on more or less simultaneously but which were probably only ten or twelve in number; and all I know is that finally the four of us, Daphne, Sister Mary Elizabeth, myself, and yes, Tommy, were walking (well, I was limping, my leg was still hurting) along North Street together, the two girls in front, Tommy and I walking side by side.

“Drinks with the young people!” said Tommy again, as he had several times before.

“Oh wait!” said Sister Mary Elizabeth, and she stopped, turning sideways to Daphne and putting her hand on her arm.

I noticed they were both carrying purses. Daphne’s was red plastic, Sister Mary
Elizabeth’s was black leather, although I suppose they both belonged to Daphne.

“I don’t have any money,” said Sister Mary Elizabeth. She removed her hand from Daphne’s arm and put it on the purse she held in her other hand. She stared at the purse and then back at Daphne.

“Right. Come to think of it I only have a few dollars.”

Both the women looked at us. Their dresses, a glowing blue on Sister Mary Elizabeth, a flashing yellow on Daphne, and their skin – Daphne's tanned like polished oak, the sister's white like a statue in church – pulsed in the bright failing light falling through the trees.

“I suppose I’ve got twenty or so on me,” said Tommy.

“That’ll get us started,” said Daphne. She turned to Sister Mary Elizabeth. “But what you need to understand, Mary Elizabeth, is we’re women. We don’t really buy drinks.”

“Life is completely unfair,” said Daphne and she turned and started walking again.
The extremely attentive reader will be aware that I had still not managed to go to the bathroom since leaving my aunts’ house about a century ago. As we approached my aunts’ house I said, “Excuse me, can I just stop here briefly?”
Daphne turned.

Of course I couldn’t say I had to use the bathroom. Not in front of a nun. Even if she were dressed in civilian clothes, and wearing make-up.

“Changing out of your conservative dark grey suit?” said Daphne.

(Go here for our next thrilling chapter. Kindly look to the right hand side of this page for a complete and up-to-date listing of links to every other possible episode of Arnold Schnabel’s Railroad Train to Heaven™, approved for the second year running by the Wasilla Alaska Commissariat of Acceptable Literature.)
Posted by Dan Leo at 6:12:00 AM

Oh that lifted my spirit. If Tommy had a role in my family, I would invite him everywhere. And hasn't Daphne gotten Elektra's name right before? She's the only one, I think.

I supposed in those days, Arnold relieving himself in the bushes would be unthinkable. Because if they stop at his house so he can "change," who knows what complications are bound to ensue?

PS. I thought I recognized two of the guys in the top photo.

Yeah, those two dudes on the left do seem oddly familiar...

Goddam Lennon rocked out on that song.

Finally someone who got her name right.

Will Arnold actually be using a bathroom or will he be relieving himself in one of Mrs. Biddle's urns? Arnold seems to have to go to the bathroom a lot. Of course that could be because he never goes.

Congratulations on your 100th posting! Has the Smithsonian contacted you about preserving this great cultural treasure?
I identify so much with Arnold, by the way.

Jen, stay tuned for the answer! Should be another adventure by Sunday.

Manny, we're hoping to have the grand gala at the Smithsonian next 4th of July. However, the good people of the Arnold Schnabel Society insist on keeping the bulk of Arnold's archives and memorabilia at the West Oak Lane Free Library, up near Arnold's old hood, which seems only right.

Right and good.
Hope they're ready for the pilgrims.