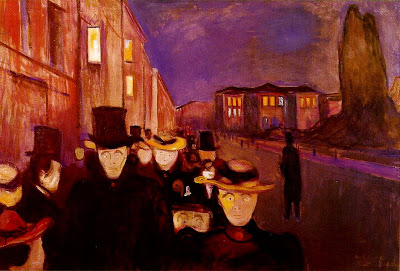 Larry Winchester (“Perhaps the only human being who can be called a world-class genius both as a novelist and as a film-maker” -- Harold Bloom) now takes us deeper still into the mysteries of Q Section. (In case you need some brushing up, go here for our last chapter, or, damn it, go all the way back to the beginning. Midterms are approaching.)

Under Vice Admiral Hackington’s stewardship Q Section’s operations became even more abstruse, its methods more extreme. It also became more secretive than ever. Formerly Q Section had operated loosely under the aegis of the Office of Naval Intelligence, but now even this connection was severed, and the section henceforth operated under the immediate command of the Chief of Naval Operations. Or so everyone assumed. Pym was not so sure. President Kennedy was assassinated a few months after the Vice Admiral took over, and it was rumored that even President Johnson was unaware, and was kept unaware, of Q Section’s existence.

Pym sometimes wondered if anyone knew of Q Section’s existence at all except for the people in the section.

By the time Dick returned from Tibet things were indeed quite different in the warren. Oh, sure, Hackington was the boss, he was the chief, no one disputed that. But Pym -- whose official title now was Operations Executive Officer -- he was the Vice Admiral’s mouthpiece. And his earpiece too, for that matter. Pym knew what people said behind closed doors. He literally knew what people said behind closed doors because at his suggestion Hackington had agreed to let him bug every square inch of the warren. So Pym knew what they said all right. He knew what they called him. They called him a weasel, a brown-noser. Well, let them. They would pay. There were far worse things than being a brown-noser after all. Far worse things. Like being a nonentity, let’s say.

Two opposing factions developed within the section. Dick became accepted as the voice of the more moderate faction. Hackington was the very loud and strident voice of the other faction, and so everyone knew damn well what faction Pym was in. But Dick was liked and respected. Pym on the other hand was universally disliked and despised (even Hackington, whose chief toady and jackal Pym was, even Hackington basically couldn’t stand the man). Dick also knew a great deal, more even than Hackington knew. Dick had the capability of making big trouble if he wanted to. And on a much more primal level Pym feared that Dick would beat him up or even kill him if he caught Pym trying something really insidious against him. No, Dick would have to be dealt with patiently as well as cunningly. For the time being it was best to let him have his way to a great extent, let him pursue his mysteries, his little bugaboos, let him. Sooner or later he would leave himself open, and then he would be dealt with. And Pym would do the dealing.

And he had never admired him more than during that week when Dick, loaded up with sodium pentothal and methamphetamine and LSD, denied food and sleep, his eyes taped shut, had managed to crack corny jokes even as Pym was pulling out his fingernails with a pair of needlenose pliers.

Dick had never broken, not really. Sure, he’d talked, finally, but he hadn’t really said anything. Who knows, if they had had time, another month maybe, perhaps they could have broken him. But then the word had come down from Vice Admiral Hackington to turn him loose, and they had. Loaded him up with Gilbey’s gin and dumped him out on the sidewalk in Philly’s Skid Row with nothing but one crumpled dollar bill in his wallet.

(Go here for our next thrilling chapter. And please check out the right hand side of this page for an up-to-date listing of links to all other extant episodes of Larry Winchester’s A Town Called Disdain™. All material approved by the Commissariat of Homeland Insecurity and Police Commissioner Frank Rizzo. Nihil Obstat: Bishop John J. (“Big Jack”) Graham.)

Oh that Dick. I love how you moved from wanting to torture to torture. The line can be crossed so easily. :)

But just remember, Manic, here in the USA, "We don't do torture".

With Dick, I'm solid. It's Pym who tricked me. I felt sorry for the sniveling rat. No more.
Why did this bring to my mind: "game theory?"
Was it the video? Torture? Spying? The usual insanity? Last time the words "game theory" popped up, I was reading that book about John Nash.

Damn, I'm completely ignorant of game theory, as I am of most theories. But I'll check with Larry and see if he's hip to it.

Pym does seem to be quite caught up in his own little reindeer games though. And I'm sure it annoys the hell out of him that Dick just can't be bothered to want to play.

Brilliant, Dan, as always.
I came in late, but I imagine a very young Steve McQueen playing Dick...Tony Perkins as Pym?
At any rate, your musical selections are sublime.