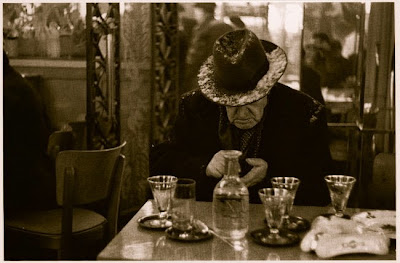 Our previous episode of Larry Winchester’s sprawling epic found Dick Ridpath dumped unceremoniously to the curb on Philadelphia’s notorious Skid Row after having been mysteriously kidnapped, tortured, drugged and interrogated for a week. Fortunately, Dick has remarkable powers of recuperation, and drugging him may have been a stupid idea to begin with.

It is a steel-grey day in January, 1965, perhaps the last year when most of the world was still in black-and-white...

After the van drove away Dick just sat there on the curb for a while. Well, he hadn’t been shot in the back of the head, that was something.

It was a grey morning, but his eyes had been taped shut for a week, and so he sat there with his hand over his face until the blurriness dissipated. He was wearing the clothes he’d been picked up in, a grey Joseph A. Bank suit, a Burberry topcoat. His tie had disappeared, as had his belt. He touched his face with his left hand and felt a week’s growth of beard. He looked at the fingers of that hand. His captors had been so thoughtful as to put Band-Aids around the tips, where they had torn the fingernails out. The Band-Aids were red with blood, but the fingertips only mildly throbbed. They must have poured at least a fifth of gin down his throat, and gin was an admirable anesthetic, at least until the hangover set in.

Dick stood up, the world rocking slightly. The air stung his face with a thin sharp snow. The snow smelled like shit.

Several bums stood against the wall right there.

“Thanks, but what town?”

The bums all laughed. Dick waited.

“What town,” he said again.

This time no one laughed.

His home town, this was convenient.

He turned and looked around, getting his bearings. There was the hump of the Benjamin Franklin Bridge over there. He headed south. On Market Street in front of Gimbels he bought a soft pretzel and a black coffee from a sidewalk vendor. He ate the pretzel slowly in the spitting snow, standing in the middle of the sidewalk, the passing people giving him a wide berth. Then he drank the steaming bad coffee, the sidewalk tilting slowly back and forth like the deck of a ship at sea.

He dumped the empty paper cup in a trash can and turned down Ninth Street, between the department store and the post office.

At the alleyway next to Leary’s bookstore he stopped, and he found himself looking through the used book stalls under the black tin awnings. The clerks were starting to cover up the books with plastic sheets, but no one said anything to Dick as he fumbled through the stacks in the swirling snow. He found a bloated, quite used copy of Erroll Flynn’s My Wicked, Wicked Ways, and he bought it for a dime from the frightened assistant and stuck it in his coat pocket.

His parents’ house was at 19th and Panama. An easy walk, provided he didn’t pass out. At Broad and Chestnut it occurred to him that he should call first, and he stopped in a phone booth, dropped in a dime and dialed. No answer. No big deal, his parents were often out of town.


Whoever had kidnapped him had left him with his keys, including his parents’ house key. He let himself in.

The house had that empty carboard-box smell about it that it had when no one in the family had been in it for a while. Dick’s brothers were dead, his little sister Betty away at Radcliffe. His father was probably down in Honduras, his mother God knows where, anywhere but where his father was.

He made his way to kitchen, found an unopened quart bottle of milk in the refrigerator, tore off the cap and drank the entire quart in long slow gulps. He did a slow-motion somersault as a Ferris wheel spun through his head, and when he woke up it was Mrs. Bailey, the maid, holding his head.

She smelled warm and he wanted to bury his face in her bosom.

This woman was indefatigable.

“You gotta get off the floor. You’ve been drinking. And what happened to your fingers?”

He looked at his bloody fingertips. Now they hurt. Now they hurt like hell. They hurt like he had just dipped them into a Fryolator of boiling peanut oil. Meanwhile his brain felt like it was trying to punch its way out of his skull. His stomach didn’t feel so hot either.

She was a strong woman, and she helped him to his feet. The broken milk bottle was all over the kitchen floor.

“You musta really tied one on.”

He leaned against the counter and she poured him a glass of water. He drank it and asked her some questions, finding out what day it was, what time it was. Apparently he’d been lying on the linoleum for three or four hours at least.

“I think that’s a good idea. You want some food?”

“I’ll fix you something.”

“Okay, great. And find me some cigarettes, please.”


In his room he lay on his bed, wearing his dead brother Jim’s pajamas, smoking his father’s Chesterfields, drinking the hot Ovaltine and eating the milk toast Mrs. Bailey had brought him. He had swallowed four of his mothers Demerols, and the pain in his fingertips was only a distant tingle now.

It suddenly occurred to him that he should call the warren. He picked up the phone and dialed long distance and Gladys picked up.

“How can you be AWOL if you’ve got two weeks’ liberty?”

“Dick, are you drunk? You sound funny.”

“Um, do you mind putting him on, Gladys?”

It took a minute or so, and then came Pym’s voice.

“Dickie boy, how’s your vacation going? Dick? You there, kid?”

Dick could hear Pym sucking on his pipe. Pym’s greatest living hero as to personal style was Hugh Hefner.

“Where ya callin’ from, Dickie?”

“How’s the family? How’s the Commodore?”

“All right, look, Al, you’re not gonna believe this but I was kidnapped and tortured and drugged for a week.”

“Oh ho. Sure you were. Next you’ll be saying they were little green men who took you away. Mm-hm.”

Pym had this annoying habit of bookending his little attempted witticisms with an “oh-ho” or a “mm-hm”. He really was a lame, spiritually-stunted little motherfucker, and one of the chief reasons Dick spent as little time in the warren as possible. And anyway --

“What’s this about light grey people?”

Dick was unable to talk. he was starting to remember something and at the same time he was growing sleepy, incredibly sleepy, sleepier than he had ever been.

Dick reached the receiver over to its cradle, which seemed to be five feet away even though it was right there next to him on the night table.

Very deliberately and slowly he leaned over that five foot space, that six foot space, and he stubbed out his cigarette in that ashtray that was seven feet away from him.

Where had he been that other week, the week he’d supposedly been over the hill? But he hadn’t been over the hill. He’d been in New Mexico, quietly perusing air force files, driving around in a jeep to these supposed UFO-sighting places, keeping in daily touch with the warren, and then he gets back and everyone’s saying Where Have You Been? It was too weird. And so he phones back to the air force people in New Mexico and they’re acting as if they haven’t seen him in a week, but they had, he could account for every minute of his time there, and and yet everyone’s behaving as if he’d just disappeared for a week. And then they’re insisting he go into the hospital for testing, and of course the doctors find nothing wrong with him, he was a sound as a bell, never felt better, and then, and then, he leaves the hospital, and he, and he, he was in a cab and he fell asleep, he was very sleepy, and then he woke up or was woken up and his eyes were taped over, and that’s when the questioning and the drugging started and then the fingernail-pulling and so forth.

It was all very weird. What was he thinking when he thought he’d been kidnapped twice?

And then he went down, into a deeper sleep than he had ever known.

(Click here to go to our next thrilling chapter. And kindly turn to the right hand side of this page to find an up-to-date listing of links to all other extant episodes of Larry Winchester’s A Town Called Disdain™, a Quinn/Martin Production.)

Dick is an original: a believable hero and a believable man, providing you believe a man can sustain a human, modest perspective.

Thank god he wasn't punished by anyone, just questioned severely. That's alright these days. I'm liking this Dick more and more, and that Pym fellow first got my sympathy because he was a bit of the underdog, but now he's like a dick.

So true, Manic; Dick may be Dick through and through, but when it comes to being a real dick, Pym has got him beat by a country mile.

Kathleen, expect Dick to give you a call next time he's in town.

By the way, a very special hat-tip to our friend Dean who was able to point us, via e-mail, towards the fabulous Tams and their original version of "Untie Me".