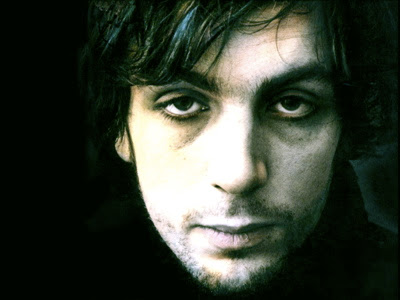 In our previous episode of this “meaty, beaty, big and bouncy” (Harold Bloom) epic from the battle-scarred Remington portable typewriter of Larry Winchester: the beautiful mystery woman Daphne (currently guest-appearing in Arnold Schnabel’s Costco Award-winning Railroad Train to Heaven) met up with an old acquaintance...

Dick looked up, his mouth full of collard greens and salsa.

Daphne made a tortured moue, opening her eyes wide in supplication, she was so bad with names --

But Dick gulped and said, “Enid.”

“You remember me,” said Enid. She, like Daphne, held a bottle of beer in one hand and in the other a crockery plate heaped up with smoking beef.

Dick stood up, wiping his hands on a paper napkin.

“Of course I remember you.”

Enid went around the table and sat down opposite Doc Goldwasser.

“Very much. I identified with the heroine.”

Dick was still looking at Enid, flabbergasted. Daphne had sat down across from him. She reached over and tugged his arm and said, “We’re going to take peyote with the Indians.”

Squitters now sat to Enid’s other side. He was already drunk.

“I wanna feel your bum.”

“Write a song about it, buddy.”

His hand fumbled its way under her jacket. He loved Enid’s bum. Had some bleedin’ meat to it. Not like all these bleedin’ London birds living on a diet of crystal meth, Cuervo and Woodbines.

His mouth was smeared with barbecue sauce and she could see dribs and drabs of it in his stringy mud-colored hair.

“Do you want me to knock you clear off this bench and then put my boot-heel in your face?”

He drew his hand away and picked up a beef short rib. He tore off a bit with his jagged little yellow teeth and then leaned over and addressed Hope.

“Oy, love, what kind of music you like?” Hope turned her large dark eyes to him. “I mean,” he said, “you know -- pop, trad jazz, folk, acid fuckin’ rock --” Her mouth opened ever so slightly, but she said nothing. “You know,” said Squitters. “Music?” She stared, her eyes two black holes. “Reckon ya like folky stuff, right? Bit o’ Crosby, Stills and Nash. ‘Suite: Judy Blue Eyes’, di di di dit. Bit o’ Nick Drake, Tim Buckley. Phil Ochs, sit by me side, come as close as the bleedin’ night. Fred Neil, been searchin’ for the bloody dolphins in the bleedin’ sea --”

Hope turned away as if she hadn’t heard a word, and gazed toward the barbecue and its glowing coals and rotating butchered beef.

Squitters, blinking and chewing, continued to stare at her.

Her dress was printed with thousands of tiny zinnia -- yellow, orange, scarlet and purple against a white background. Her exquisite black silk mantilla lay over her small shoulders and her face and her arms were the color of moonlight on still mountain lakewater.

Derek leaned over toward Enid.

(Go here for our next exciting chapter. Check out the right hand side of this page to find listings of all other extant episodes of Larry Winchester’s Railroad Train to Heaven™, possibly soon to be a major mini-series event on the Lifetime Channel, starring Scarlett Johannsen, Angelina Jolie, Clive Owen, and Jake Gyllenhaal, with special guest star Pete Doherty in the role of Derek.)

Sure sounds and looks like fun there in Disdain. (Had someone invented meth? Maybe that's what was up with my 'rents when I was a tot.)

Manny knew what the video was right off--wonder how many times he watches this one.

Oh, boy, meth and its variants had been around for a while by '69. Speed was especially popular with the Mods in mid-60s Britain. Or so I've been told.

I'm going to have to invent a new game: Stump Manny.

A tip of the Leo Lid to the Manster for recognizing Russ Meyer's classic "Faster, Pussycat, Kill! Kill!"

I used to have an album by the Who called "Meaty, Beaty, Big and Bouncy". It had "I Can See For Miles" on it and really kicked ass. The video clips of Tura Santana brought back old memories.

Tedster, a tip of the Leo lid to you for catching the Who reference. I love those early Who songs.

Ah, yes, Tura...excuse me, I must watch the clip again.

Hang in there, Anon, 'cause I think Derek is going to have some good screen time in upcoming episodes.

You have a most cool blog.

Thanks, Tor -- hope to see you again soon.