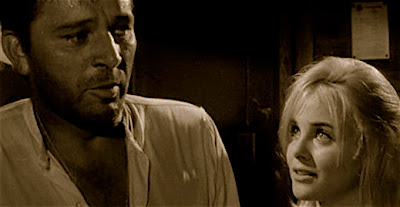 Previously in our Pep Boys Award-nominated serialization of the complete and unexpurgated memoirs of the man Harold Bloom called “not only a great poet, not only perhaps the greatest prose writer of his generation, but a hero to schlemiels and schlimazels everywhere”, Arnold Schnabel found himself walking down a hallway in a large Victorian house in Cape May, NJ, on an August evening in 1963.

As a sweeps-week bonus to our fans, a certain young lady featured in our current episode of Larry Winchester’s a Town Called Disdain™ here makes a very special guest appearance in our program. (Check here to re-live Arnold’s first encounter with her.)


I had just gone into the kitchen and was headed for the refrigerator when all of a sudden that girl Daphne came bursting into the kitchen through an opposite doorway and practically ran into me.

“I’m so glad you came tonight. Dick was very impressed with you, you know. And he hates everybody. I’m sorry I didn’t get to say hello before, but I was absolutely obsessed with playing badminton. Do you play?”

She was wearing yellow shorts and a matching yellow sleeveless top, and she was sweaty.

I suppose she noticed me giving her the once-over, because she asked me if she looked horrid.

“Should I change out of these sweaty clothes?”

“Are you going to play more badminton?”

The ends of her brown hair were wet. She took one damp strand between finger and thumb, ran it away from her head and let it fall back to her neck.

“Was that your girlfriend I saw you with?” she asked.

“Well,” I said, “we’ve only been seeing each other for about a week.”

“What are you doing in here? Looking for the bathroom?”

“No. I came in with Sammy and some other people, to get away from the mosquitoes, but then Mrs. Biddle —”

“Right; she stopped me and talked to me for a while.”

“Did she interrogate you?”

“She asked me some questions.”

“What did you tell her?”

“Only my name, rank, and serial number.”

She opened her mouth, paused, then smiled.

“Funny man. So where are Sammy and the others?”

“They went up to the second-floor porch.”

She turned and skipped over to the refrigerator, which was a very large and modern one of the sort I’d only seen before in Doris Day movies.

She opened the doors and bent over, and I tried not to stare, even though (and because) she was facing away from me.

She twisted her head over her shoulder and said, “All we’ve got is Schmidt's in here.”

There was a bottle opener nailed to the wall, of the sort you see in taverns, with a metal cup under it to collect the caps. She popped the caps on our respective beverages and handed me the beer.

We each took a swig of our drinks.

“Tell me about going insane,” she said.

“My friends will be wondering where I am.”

“So you knew you were going insane.”

“Yes, I knew something was coming.”

“And what was it like while you were insane?”

“I’ve blacked out a lot of it. But what I remember was like being in a dream. Or a nightmare.”

“How horrible. Tell me more.”

“I saw things. Or imagined them.”

“Well, one night I imagined that Jesus came to me.”

“Oh my God, do go on.” She put her soda bottle down on the red formica kitchen table and stepped closer to me, which made me feel awkward. I could smell her warmth. I took another good drink of beer. “What was he like?” she asked.

“He was — very comforting. Somehow. And the next morning I woke up feeling a lot better.”

“But not completely better.”

“No. And I’m still not completely better.”

I took another drink.

“I really should join my friends upstairs,” I said.

“I’m giving you the third degree," she said. "I’m worse than my grandmother. But tell me something. Do you still – see things?”

“Yes,” I said, because for some reason or reasons I couldn’t summon the energy to lie.

“Do you suppose he’s real?”

“No,” I said. “I think he’s a figment from a part of my brain that’s still in the dream world even though I’m awake.”

“But what if whatever is in your brain is as real as what’s in the physical world?” she asked.

“I’d rather not think about that.”

I took a drink. She put her hand on my left arm.

“Tell me something else.”

What the hell, I was already singing like a canary.

“What do you think of Dick?”

This was a good break. I was glad to get off the Jesus subject.

“He’s not quite right in the head either,” she said.

“I’m madly in love with him, but I haven’t let him know it.”

I don’t know if she was aware of it, but she was squeezing the crook of my arm, with surprising strength for a girl.

“May I confess something,” she said. “Something personal.”

I finished the beer in two more gulps and put the empty bottle down on the red table.

Then I pried her hand off of my arm.

“Well, I should find my friends now,” I said.

“I’ve made you uncomfortable.”

“For what my opinion’s worth.”

She looked into my eyes, disconcertingly. I probably gulped before answering her.

“So I’m wondering if maybe I should know some other men first,” she said. She ran her thumb along my biceps muscle. “Build up some sort of a basis for comparison. Then after a few years I could give Dick a go. See how he measures up. What do you think of that as a plan?”

“What if Dick meets someone else in the meantime?”

She stopped rubbing my arm and tugged at the sleeve of my polo shirt.

“Dick is always meeting someone else, believe me; there are no flies on Dick. But he’ll wait for me.”

She tugged on my other sleeve with her other hand, as if to make sure they were even.

“How do you know he’ll wait?” I asked

She wet her fingertip on her tongue and began rubbing a place on my shirt, over my chest. I looked down. I had a mustard stain, and she was wiping it off.
A chorus of ancient laughter crackled in from the hallway, from the direction of the dining room. One of the card-players must have made a joke.

Now she was playing with the collar of my shirt. I was drenched with sweat, as if I had just played a vigorous round of badminton myself.

Once again I pulled her hand away.

Then I turned and reeled out of the kitchen.

I seemed to remember seeing a staircase, and sure enough I found it, and bolted up the steps two at a time.

What was it about insanity that women found so appealing?

(Perhaps the answer lies in our next installment. Turn to the right hand side of this page for listings of links to other steamy episodes of Arnold Schnabel’s Railroad Train to Heaven and to many of his immortal poems.)

Passing on Daphne may be the most insane thing Arnold does. Can't his friends wait twenty minutes?

Kathleen, the jury may still be out on the question of Steve's divinity, but I think we can safely conclude that Arnold is a saint.

That's true. He may be the only poet/saint ever born.

I'm preparing a petition to send to the Vatican. It's high time Arnold was canonized by Holy Mother the Church.

Arnold is just a chick magnet, isn't he!?! Remind me who is playing him in the movie? Frankly, I can't get the image of the man waving from the train out of my mind...

which was a very large and modern one of the sort I’d only seen before in Doris Day movies.

This made me think of the totally space-age one in The Glass Bottom Boat.

Jen -- the Arnold film project is still "in development" as we say in Hollywood, but director Larry Winchester is still trying to get Ralph Fiennes for the part of Arnold. Apparently Ralph is "keen" to play the part, as indeed why shouldn't he be?

Unfortunately, Richard Burton, featured in our post's illustration (that's Sue Lyon with him) and in our video clip (that's "Night of the Iguana" -- rent it now!) is no longer available.

That's right, you had mentioned Ralph before.

And Sue Lyons!!! I knew I knew that face, but could not think of her name.