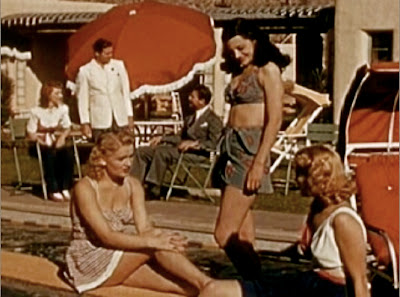 Larry Winchester, auteur extraodinaire of this first-ever unexpurgated and unrated edition of his sprawling masterwork, here deftly switches the narrative back into the voice of the mysterious Dick Ridpath.

The place is the Johnstone Ranch, several miles outside of the town of Disdain, NM. The time is September, 1969, the month after the first Moon landing, and Woodstock, and the Manson murders. “Sugar Sugar” by the Archies is soaring its way to #1...
(Click here to see our previous episode.)

Finally around one o’clock we came down these long wide curving stairs, following the lovely maid Esmeralda, and into an ornate large dining room where apparently everyone was waiting for us.

And who do we see but Hans Grupler and that evil bitch known as “Marlene”.

Talk about not being able to escape one’s sordid past.

We sat down and were introduced.

Two smooth young men (“Mr. Philips and Mr. Adams”) whom I at first took for a couple of homosexual lads on vacation, but further observation makes me think CIA, maybe FBI.

Also a rather dissipated-looking young Englishman with long hair.

Big Jake of course and this absolutely stunning but very strange creature introduced as his daughter with the somehow unlikely name of “Hope”.

Grupler looked tanned and fit, as did Marlene, who by the way is built like a brick shit house and was wearing this distracting blouse thing opened up way down.

Philips and Adams were “geologists” doing some “fieldwork in the area for the government”. Right. OK.

The only guest who seemed legit was the Limey, introduced as Mr. Squitters, apparently a rock and roll star (never heard of him, what do I know) here to record and study local Mescalero chants. He spoke little; he said, with a thick Cockney accent, that he was “bloody ‘ungover”, and he looked it.

Lunch was OK. “Chicken fried” ham, which Big Jake said was from Virginia. A quite good “red hot” salsa. Nice warm tortillas instead of bread. Heinz baked beans. Canned peas and carrots. The pineapples were also from a can. An unusual rutabaga salad. Mateus and Blue Nun unfortunately, but -- surprise -- a decent Beaujolais.

Everyone played their cards tight to the vest.

Jake is dumb enough not to know about Grupler and Marlene, and Philips and Adams. But who knows?

With a day already wasted sleeping I thought it best to get right to work, so I asked Jake if we could have the soldier for the day “to show us around”.

Daphne wanted to go horseback. This seemed as good a way as any to reconnoiter the neighborhood, and had the advantage of being good “cover” since we were supposed to be on vacation ourselves.

After lunch Daphne changed into riding clothes. Brought out those old jodhpurs. She asked me how she looked in them, turning around.

She looked so good in them I had to take them right off her again.

(Click here for our next exciting chapter, and kindly go to the right hand side of this page for quick links to other episodes of Larry Winchester’s A Town Called Disdain and to appreciations of many of Larry’s classic films.)
Posted by Dan Leo at 4:34:00 AM

Dick Ridpath is the first man I've come across, anywhere, who knows the correct answer when a woman asks, "How do I look in these?"
These being jodhpurs, earmuffs, or beach shoes. Of course, after he removes the item in question, be it jodhpurs or sunglasses, he often, but perhaps not always, must remove more.

Dick is nothing if not a gentleman.

"Everyone played their cars tight to the vest"
Like Crackle, bent over the hood of the T-bird?

Anon: Woops! Thanx so much for the typo-spot, bro! Although come to think of it, maybe cars is better than cards -- definitely less cliché...