Mrs. Malazewski, the sweet “Angel” of B Street 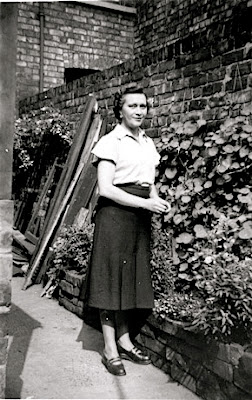 Everyone knew Mrs. Malazewski. A widow whose husband Stanley had worked as a tool grinder at the Heintz steel plant for many years, she lived alone in her small rowhome on B Street right across from the factory. (Right up the corner lived the famous poet-laureate of Olney, Arnold Schnabel, and his mother.) Her three children had grown and moved away, and she often greeted the men and boys coming to and from old Stan’s workplace. Often she would invite one or two of the lads to come in for a beer or two while she rolled pie dough with the enormous wooden roller her mother had brought over from Poland. (Mrs. Malazewski herself did not imbibe but she had always kept beer in the house for Stanley when he was alive and she continued to do so after he passed away at the age of forty-eight, the victim of a massive coronary perhaps hastened by his heavy diet of kielbasa and chops, Mrs. Malazewski’s homemade pies, and four quarts of Schmidt’s beer a day.) Soon it became a nightly event for quite a few of the guys to stop over at Mrs. Malazewski’s after work. Wanting only to cover expenses and to make a modest profit, Mrs. Malazewski regretfully had to begin to charge the boys for their beers and shots of Schenley’s whiskey, not to mention the hot brisket sandwiches and rhubarb pie with fresh whipped cream, but her prices still were half of what Pat asked over at his legal Tavern, not to mention the Green Parrot or the Huddle. (And her food was better than at any of those places!)

As business picked up, Mrs. Malazewski had her basement soundproofed, installed a jukebox and an ice machine down there, and even occasionally hosted informal jam sessions featuring off-duty musicians from the nearby Schwarzwald Inn. Evenings were quiet and mellow affairs at Mrs. Malazewski’s but things always picked up after two AM when the legitimate bars closed. Guys from the Heintz plant who had worked the 6PM-to 2AM shift knew they had a nice nearby stopping place where they could drink and talk, play the new pinball machine Mrs. M had brought in, have a quiet game of 8-Ball on the billiard table that now stood where the dining room table used to be, and then stagger happily home before first light.

Everything went fine until that night in November of 1962 when Hank Titana got out of hand.

Hank was an enormous and boisterous stoker at the plant, loud and obnoxious and opinionated, and no one really liked him, not even his own wife and children, in fact especially not his wife and children. (Hank spent almost every cent he earned on booze and gambling, and it was his wife who kept the household running, taking in sewing and making dresses out of her house on Wentz Street.) Only a year before Hank had finished a three-year jolt in Holmesburg for assault-and-battery, and that hadn’t been the first time his penchant for violence had landed him behind bars, either. Hank when he drank tended to act a lot worse than he did sober which was already bad, and unfortunately he drank every day, a lot. Mrs. Malazewski had never had any time for Hank Titana and had banned him from her house many years before when he broke all four legs of her kitchen table one night during an argument about baseball with her late husband Stanley.

However, one fateful cold November evening, after the inevitable had happened and Hank had finally been flagged from every last bar in Olney, he begged Mrs. Malazewski on bended knee and with cap in hand to allow him the honor of patronizing her establishment. He tearfully explained that it was either Mrs. Malazewski’s or sitting in the woods with a bottle for poor him, because his wife wouldn’t let him drink in the house. Mrs. Malazewski listened to his pleading for a while and finally relented, but only after assuring him that he was being allowed in on a trial basis only.

Something happened that night. There was talk of a big fight at Mrs. Malazewski’s, and indeed a few of the guys came in to the plant the next day with black eyes. But one fellow who didn’t come in to the plant was the fearsome Hank Titana.

Hank had disappeared and no one knew where. The word spread that Hank, who was on still on parole for his last conviction, had skipped town after beating a few guys up, fearing to be sent back to the slammer for good as a three-time loser. When his wife finally reported his disappearance a few days later Detective Morris “Big Mo” Berg stopped by and had a little talk with Mrs. Malazewski. Over good hot Maxwell House coffee and warm rhubarb pie she told Big Mo that, yes, there had been a little conniption that night when Hank and a few other boys were visiting, but that she had thrown Hank out on his ear and his filthy old cap after him and told him never to darken her doorway again. Big Mo took a look around the little house, even went out into the tiny yard where Mrs. Malazewski grew hardy rhododenrons able to survive even amidst the harsh fumes constantly wafting by from the factory, and then he thanked Mrs M and left.

After that one unpleasant night it was business as usual at Mrs. Malazewski’s. (Once a month until the last of her four kids turned eighteen Mrs. Titana found an unstamped envelope with a hundred dollars in it slipped through her mail slot late at night; whether this allowance came from some local benefactor or benefactors, or even from the awful Hank Titana himself, trying finally to do right by his family, no one ever knew.)

In 1979 Mrs. Malazewski finally passed away quietly at home. The Heintz plant had closed many years before, and Mrs. Malazewski had eventually retired her speakeasy, although she was always ready to offer a cup of tea or a glass of beer to a neighbor or a passing policeman.

A nice young Korean couple bought the little house from Mrs. Malazewski’s children. The wife, Mrs. Oh, set immediately to work on the backyard garden, which had been sadly neglected since Mrs. Malazewski’s death several months before. Imagine Mrs. Oh’s surprise when, upon digging up the earth in order to lay fresh soil she found the decomposed remains of a big-boned man, his skull crushed. Next to the skeleton lay a large and severely dented rolling pin. Scientific examination proved that the dead man was none other than the long-missing Hank Titana, and that death had been caused by a blow to the head with the rolling pin, which in fact was Mrs. Malazewski’s, brought over by her mother from Poland in 1904.

Big Mo Berg, himself about to retire after thirty-five years on the force, declared the case finally closed.
Posted by Dan Leo at 3:04:00 AM

I remember hearing stories from my parents about Mrs. Malazewski and her speakeasy. They were both from Saint Helena's parish and used to hang out at the B Street hub when they first started dating. My parents were only juniors in high school, and the place was all they could afford. But it was more than a cheap place to go when you were broke, it was a homey place to go to when you didn't feel like leaving the house.

Unfortunately I grew up around Fifth and Shunk and the normal guys were like Tony Titano. Anyway, poor Stanley Malazewski I don't think it was the pie or kielbasa that killed him but the four quarts of Schmidt’s beer a day--shiver me kidneys.

Ah, thank you, anon. You are very kind, and I admire your good taste!

Sure, no problem, Rodrigo, and muy gracias for stopping by mi pequeña casa.

"and no one really liked him, not even his own wife and children, in fact especially not his wife and children."
"Hank when he drank tended to act a lot worse than he did sober which was already bad, and unfortunately he drank every day, a lot."