“The Ballad of Waldo McGee and Mickey Pumpernickel” 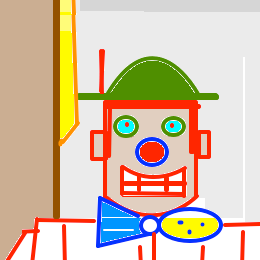 After twenty years in the marines and another twenty-some years running this joint, Bob figured he’d pretty much seen everything there was to see, but then one hot bright Sunday morning Waldo McGee came into the joint carrying his dummy Mickey Pumpernickel under his arm. He took a seat at the bar, with Mickey sitting on his lap. Mickey was just a ventriloquist’s dummy, but he looked more alive than Waldo did.

Bob came over and took the cigar out of his mouth.

“You don’t mind I brought my dummy in here, do you?” said Waldo.

“Oh, you ain’t got to worry about Mickey,” said Waldo.

“Yeah,” said Mickey, and to be honest you could see Waldo’s lips moving just a little bit, but just a little, almost like it was just a nervous twitch. “It ain’t me you got to worry about. But this bum I ain’t so sure about. Keep an eye on this guy, mister.”

“Nothing for me,” said Mickey, “but this drunken bum will have a libation. How’s that basement-brewed bock you got on the blackboard there?”

“I don’t get too many complaints,” said Bob.

“Give him a glass of that then.”

So Bob drew a glass of the bock and put it in front of Waldo, who had put a small handful of change on the counter. Bob took a nickel, went to the register and rang it up.

Just then Philip the uptown swell came in, sober, so far, and sat down next to Waldo and Mickey.

“Hi, Bob,” said Philip, taking out his cigarettes. “I think I’ll start with a Manhattan today.”

Philip always started one of his sprees with a Manhattan, but he always said it like it had just occurred to him. After he had taken his first sip, he sighed, and seemed to notice Waldo and Mickey for the first time.

“Mickey Pumpernickel’s my moniker, and this drunken clown is Waldo McGee.”

The dummy extended his tiny right hand, and Philip, with only a moment’s hesitation, took it and gave it a shake.

“Pleased to meet you, Mickey. And Waldo.”

“See?” said Mickey, turning to Waldo. “This guy is a gentleman. You can tell. Unlike some people I could mention.”

Philip was willing to let it go at that. He never minded just sitting and drinking quietly, but the dummy spoke again.

“Maybe you seen us perform once or twice? We was regulars on the old Pantages circuit for years.”

“Yep. All across this land o’ liberty we worked. Also night clubs, burley-Q joints, Shriners conventions, VFWs, that kind of thing. Birthday parties, bar mitzvahs. Even got on the radio a few times. Waldo McGee and Mickey Pumpernickel?”

“For better’n twenty years we worked steady, from New York to San Francisco, from Bangor, Maine, alla way down to New Orleans, and every two-bit whistle stop in between. It was not a bad life. But then this guy –”

The dummy jerked his tiny thumb at Waldo.

“Haven’t they all?” said Philip.

“I don’t drink,” said the dummy. “Never touch the stuff. But this guy,” he jerked his little thumb at Waldo, “I’m sure he wouldn’t turn one down.”

“– for Waldo,” said Philip, “and I suppose I’ll have another too, please.”

“See, McGee?” said Mickey. “A gentleman. The last of the dying breed.”

“Unlike some people I could mention,” said Mickey.

Waldo said nothing to this.

Bob laid down the fresh Manhattans, and Philip paid for them.

The bar began to fill up with the usual Sunday morning crowd, and Philip and Mickey, and, to a much lesser extent Waldo, talked through the morning and early afternoon, until Waldo’s head suddenly began to nod to his chest.

“Uh-oh,” said Mickey. “Hey, it’s been great talking to ya, Philip, and thanks a lot for all the drinks, but I think rumdum here needs to take a nap, ya know what I mean?”

Waldo lifted his head with a weak smile.

“Yes, of course,” said Philip. “Nice talking to you fellows, too.”

“Maybe we’ll catch you in here some other time,” said Mickey.

“Awright, Waldo,” said Mickey, “let’s get you back to the hotel before you get thrown outa here.”

And Waldo got up, and, carrying Mickey under his arm, staggered out into the hot bright sunlight of the Bowery.


{Kindly go here to read the “adult comix” version illustrated by the one-and-only rhoda penmarq…}
Posted by Dan Leo at 8:51:00 AM