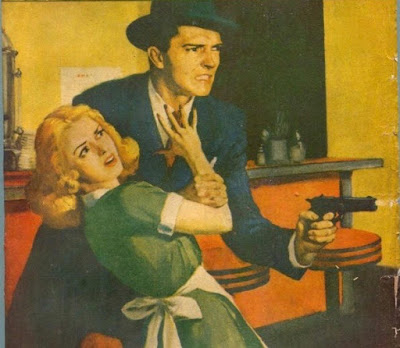 The guy had a name of course, but nobody knew or cared what it was, because in Bob’s Bowery Bar he was known as Funk, short for “Funk & Wagnalls Encyclopedia”, which is what Gerry “the Brain” Goldsmith started to call him because Funk was always showing off how much he knew about everything. “Funk & Wagnalls Encyclopedia” was a little long, though, so pretty soon he just became known as “Funk”, Funk the obnoxious know-it-all.

Billy Baskins had never actually spoken to Funk, in fact Billy hardly spoke to anyone. He was known as a quiet guy in the bar, and no one knew that the reason he was so quiet was that he was an aspiring elegant international assassin, and Billy knew from his magazine stories that a good assassin was always a little mysterious, the quiet type. But Billy couldn’t help but overhear Funk, because besides being a know-it-all, he was loud. But one thing Billy knew, the guy was obnoxious, and nobody liked him. He really was a perfect choice for a practice assassination with Billy’s new pistol.

Billy really wanted not to screw up this job, and so he decided to take his time, to observe Funk, and study his habits, so that he could pull off the assassination at the perfect time and place, like a real professional.

Billy stuck his pistol into his waistband, put on his old coat and went down the six floors of his tenement and around the corner to Bob’s.

Funk was already there, and you could hear his annoying voice as soon as you came in the door, yammering away in his high-pitched whine.

There were seats open on either side of Funk, because no one wanted to sit next to him, but that didn’t keep him from butting into conversations on either side of him, all the way down to both ends of the bar.

Billy took a stool to the left of Funk and ordered the house bock.

The Brain had been facing the other way, talking to that young poet guy Hector Philips Stone, but he turned around to address Funk.

“Why, no, Funk,” he said, “I don’t want to know all about the Albigensian Heresy, but thank you for offering.”

And he turned back to the young poet.

Suddenly Bob was standing in front of Funk and he rapped his Marine Corps ring on the bar, and everybody knew what that meant.

“Your beer is finished,” said Bob, “and so are you. Now get the hell out of here and don’t come back.”

“What, I can’t talk about the Albigensian Heresy?” said Funk. “What about the First Amendment? What about freedom of speech?”

“I’ll tell you about freedom,” said Bob. “Freedom from loud-mouthed obnoxious know-it-alls like you, which is what I’m gonna have as soon as you take your ass out that door. Or do I have to kick it out the door?”

“Wow,” said Funk. “A guy can’t even have a little conversation.”

And he scooped up his loose change from the bar and left.

“Gotta meet somebody. Maybe I’ll be back later.”

He left a quarter for Bob and quickly walked out. So, a change of plans, but a professional assassin had to learn how to think on his feet. He would have preferred to wait and study Funk’s movements and habits, but it was now or never, because for all he knew he might never see Funk again, and he would have to find somebody else to practice an assassination on.

Outside he saw Funk walking slowly up the block, and Billy quickly followed him. Now was as good a time as any because the street was empty. It was just another cold Tuesday night on the Bowery, and anybody who could be inside and warm was inside and warm. When he was about six feet away from Funk he took out the pistol, aimed, pulled the trigger.

But the gun wouldn’t fire! He kept squeezing the trigger, because in the movies they always said squeeze, don’t pull the trigger, but nothing happened.

He shoved the gun back under his coat. How embarrassing.

Just then Funk stopped and turned around.

“Did you see what Bob just did?”

“I did,” said Billy, joining him, “and I wanted to tell you I don’t think he was very fair.’

“You want to get a drink somewhere?” said Funk.

“You know any good places?”

His fine mind was working overtime, the way an assassin’s mind should. He led Funk over towards the East River, where he said he knew this one really great bar where they let people talk if they wanted to talk.

When they reached a particularly deserted block of warehouses, Billy interrupted Funk, who was going on about the Albigensian Heresy again.

“Hey, Funk, you know anything about guns?”

“Well, I bought this pistol, and I know it’s loaded, but when I pull the trigger it won’t fire. Do you want to see it?”

“You mean you have it on you?”

“Yes, I bought it for personal protection.”

Billy brought out the pistol.

“I pull the trigger but it won’t shoot.”

“Oh, jeeze, weren’t you in the service?”

Billy handed him the gun.

“Lookit,” Funk said. “You got to rack the slide first, like this, see? That puts a bullet in the chamber.”

“No, not yet. You see this little switch here? That’s the safety, you got to flick the safety down like this, and now it’s ready to fire.”

“Safety down, then fire.”

“Correct. Now I’m going to flick the safety up again, which means it won’t fire until you what?”

“Until I flick the safety down again?”

He handed the gun back to Billy.

Billy flicked the safety down, pointed the pistol at Funk’s chest, and fired. The pistol jumped in his hand, but he held onto it, and Funk fell backwards.

Billy looked around. Not a living soul. He bent over and looked down at Funk in the pale light of the street lamp. Funk stared up at nothing, and he would never talk about the Albigensian Heresy again.


– The Return of the Last of the Elegant International Assassins, by Horace P. Sternwall, Monarch Books, 1952; out of print.
Posted by Dan Leo at 2:35:00 PM