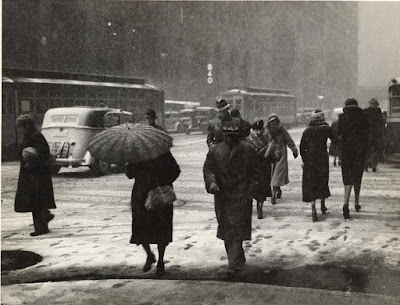 “Good morning, Gladys, and how was your new year?”

“We stayed in and listened to Guy Lombardo on the radio.”

“And how was your new year’s, Mr. Goldsmith?”

Roaring drunk at Bob’s Bowery Bar, but no need to go into all that, so Gerry simply said, “Oh, a cocktail or two with some old friends, heh heh.”

“Here’s your envelope, Mr. Goldsmith, and happy new year to you.”

Gladys handed him the plain envelope and Gerry with his usual casual air slipped it under his threadbare old chesterfield and into the inside breast pocket of his equally threadbare old tweed suit.

“Thank you, Gladys, and may I wish you and your family a most happy new year!”

“Yeah, thanks, but before you go, Mr. Goldstein asked me to ask you to go in and see him when you came in.”

“Nope. You can head right back. He’s not busy.”

Whatever could it be? Two months in a row that old Mr. Goldstein had asked to see him!

Gerry went through the worn wooden gate, past the reception area and down the hall. Mr. Goldstein’s door was open.

Had Gerry’s luck turned again, but this time for the worse? His great fear in life was that somehow his fifty-dollar remittance would be canceled. What could he do if that happened? The thousand dollar inheritance from Aunt Edna, and what was left of his brother Alistair’s hundred dollar “Christmas present” (or bribe, ha ha), would only last so long, and what if he didn’t finish his book and get it accepted by a publisher before the money ran out? He would have to find work of some sort, but what sort of work? Night watchman? Fish monger? Could he be one of those fellows who walked around wearing sandwich boards advertising cheap two-for-one suits? Did those chaps get a staff discount?

“Oh, thank God. Could you tell I was worried?”

“You were as pale as a ghost, but I see the healthy color returning to your cheeks even as we speak. In fact I have some more good news for you. Your remittance has been increased from fifty a month to one hundred a month.”

For the first time in his life, Gerry Goldsmith fainted. He had passed out of course, many times, but he had never fainted. Fortunately he had been sitting down, and when he came to he was still in the chair.

“Here, drink this,” said Mr. Goldstein. “It’s whiskey. You like whiskey, don’t you?”

What a question. Gerry drank it down in a gulp and handed the dixie cup back to Mr. Goldstein.

“Very much so. Did I dream that you said my remittance has been increased to a hundred a month?”

“It’s no dream, Mr. Goldsmith. All legal. A hundred a month till the day you leave this vale of tears.”

“I’m not supposed to tell you, but let’s just say a certain member of your family has added the extra fifty. And the money is guaranteed by a trust for the span of your life.”

“He arranged to see me, you know, right before Christmas, and after I hadn’t heard from him for twenty years, and he slipped me a hundred dollars.”

“I can tell you, Mr. Goldsmith, that there were certain, how shall I put this, vaguenesses in your Aunt Edna’s estate.”

“None of that concerns me,  Mr. Goldstein.”

Mr. Goldstein said nothing for a moment, and then he said, “Again, I am not at liberty to divulge details, but, Mr. Goldsmith, I like you, and I just want to say that if you did wish to contest your Aunt Edna’s will I should be glad to take the case, for free, gratis, and for nothing, until or unless you should receive a settlement satisfactory to you.”

“Oh, God, no, Mr. Goldstein. I wouldn’t dream of it. I hadn’t even spoken to my Aunt Edna since since, gee, my college graduation, and I’m sure Alistair needs her money more than I do, what with his house, and three kids, one in college and all.”

“Your brother, Mr. Goldsmith, was a wealthy man even before he received your aunt’s bequest. While you, if you don’t mind my saying so, live on the Bowery, Mr. Goldsmith.”

“Yes, this is true, Mr. Goldstein, I do technically live on the Bowery, but I have my own room, small, but with my own bathroom, and a two-burner hot plate, and my building is kept scrupulously clean even if it is a mite shall we say shabby.”

There was a carved wooden cigarette box on his desk. He flicked it open, pushed it towards Gerry.

“Sure, thanks, Mr. Goldstein.”

Gerry reached over and took one out. Philip Morris Commander. He was used to rolling his own, so this was a real treat. He lighted it up with the desk lighter in the shape of a fat little Buddha.

“I admire you, Mr. Goldsmith.”

“Because you stick to your guns. You live the way you want to live, and you are a philosopher. How’s the book coming, by the way?”

“Thank you so much for asking, Mr. Goldstein. I am happy to report that I now have nine pages completed and all typed up!”

“I probably would have had a dozen or more pages done,” said Gerry, “but, you know, the holidays.”

“Sure, the holidays, you’ve got to celebrate a little bit.”

Gerry touched his left breast where the remittance envelope was safely secreted.

“So the envelope really contains one hundred dollars?”

“It does, and for every month of your life from here on.”

“What a windfall! I can’t tell you how happy this makes me.”

“Look,” said Mr. Goldstein. “I’m going to be frank. Again, I shouldn’t say this, but I am seventy-two years old and I don’t care. Your brother Alistair is a rich man, and he’s made himself even richer with your late Aunt Edna’s estate. He is hoping to buy you off with fifty dollars a month, whereas, if you pursued the case, there is a very good chance you could come into possession of several hundred acres of prime Miami Beach real estate.”

“Yes. You have a very likely claim to the property, or at least a healthy piece of it. It might take a year or two, but you could wind up a well-off man yourself.”

It all struck Gerry as very tedious. Lawyers, depositions, having to show up in court early in the morning, when he loved to sleep late.

“Just say the word, Mr. Goldsmith, and I can start the ball rolling.”

“I don’t even like the beach, Mr. Goldstein. Thanks, but I can’t be bothered. I need to concentrate on my book you see.”


Gerry walked out of the building, onto 52nd Street. It was snowing. He took off his old fedora (Brooks Brothers, vintage 1927, graduation present, and unlike his old suit and chesterfield, it fitted him as well as it ever had), and he looked up at the glowing grey sky up there above the tops of the buildings, and he let the cold snowflakes dapple against his face.

One hundred a month. He decided on the spot that he would talk to his landlady Mrs. Morgenstern, and request, no, demand, that she raise his rent from fifteen a month to, what, thirty? No, let’s not go crazy here. Make it twenty-five, that was fair. Fortune had been good to him, and it was the least he could do to spread it around a little.

A cab stopped in front of him. A cab. He hadn’t taken a taxi-cab ride since – since when? Since his college days, with his friends, on a drunken spree.

He got into the cab.

“Bleecker and the Bowery, please.”

He would stop off at Bob’s Bowery Bar – it was two-for-one hot dogs on Mondays. He would have four hot dogs, and, to celebrate his good fortune, a couple of mugs of bock to wash them down with. Then, up to his room and the old Royal portable. Just one good sentence maybe, and then a good long nap.

Life was good, and Gerry enjoyed his first cab ride in twenty-eight years, driving downtown through the snowy streets to his home in the slums.