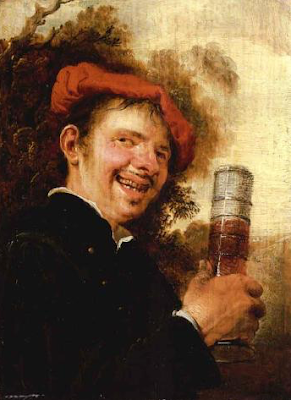 The Brain always introduced himself as “Gerard Goldsmith, but please call me ‘Gerry’; Gerry with a ‘g’.” But pretty soon everybody wound up just calling him “Brain” if they were addressing him directly, or referring to him as “the Brain” on those rare occasions when someone was talking about him.

At the age of twenty-one, upon his graduation from Harvard, Gerry had come into an annuity from his deceased grandmother, which was doled out, in accordance with that good lady’s last will and testament, in monthly payments of fifty dollars. She had hoped that this income would ease young Gerry’s passage through life, but yet not shield him from the need to earn a good living. The lady had underestimated Gerry’s laziness, however, and he had never worked a day in his life. This fifty a month had seemed a goodly sum when Gerry first began receiving it back in 1927, and indeed he had spent a couple of years living fairly comfortably in Paris, where, if he had never met Ernest Hemingway, or James Joyce, or Picasso, he had met people who had met people who had known or claimed to know Hemingway or Joyce or Picasso.

The fifty a month however went not nearly so far in the year of our story, which is 1954, and Gerry now lived in a tiny efficiency apartment on the sixth floor of a tenement on the corner of Bleecker and the Bowery, and he wore the same three-piece tweed Brooks Brothers suit he had been wearing since 1931. Gerry had put on a bit of weight over the years, and the suit had been “let out” several times over the decades until it could be let out no more, and so Gerry left the top button of his trousers unbuttoned, left the waistcoat completely unbuttoned, and only (and just barely) fastened the middle button of the coat, but he didn’t fool anyone, and his fat bulged at the side and the stomach and the rear, but still Gerry wouldn’t buy a new suit, because new suits cost money, even used Goodwill suits cost money, and Gerry would much rather spend his money on bock beer.

Whenever anyone asked Gerry what he “did”, he would say, “I’m writing a book.”

He would then wait, hoping that his interlocutor would ask what his book was about. If they didn’t ask, which was usually the case, he would finally break down and add:

“A book of philosophical reflections.”

If anyone asked him the book’s title, although practically no one ever did, he would reply, depending on the day or the year or his mood, with:

The Philosophy of a Fool.

Aphorisms of an Ass.

Thoughts Cast Into the Wind.

Lucubrations of a Loon.

Lately he had been calling his book Pensées for a Rainy Day.

Some people thought that the Brain was a fraud, that he wasn’t really writing a book, but they were wrong.

If anyone had been invited up to the Brain’s little room (no one had ever been invited) they would have found stacks upon stacks of those children's’ copybooks with the black-and-white marbled covers, and these copybooks were indeed filled with aphorisms, observations, and rhetorical questions. Someday Gerry Goldsmith (familiarly known as “the Brain”) would begin the tedious but necessary work of amassing all these notes into a book that he could submit to a publisher. But in order to do this he knew he needed a typewriter, and in fact he once had owned a portable Royal typewriter, but he had hocked it during that cold winter of 1934. Every once in a while he would wander into Iggy’s Pawn Shop on Mulberry and check to see if the machine was still on the shelves, and it was always there. Not to waste the trip, sometimes Gerry would pawn some little item: his last pair of cufflinks; his tennis racket from his days on the Harvard team; his last remaining golf club, a MacGregor driver; his Andover class ring, an only slightly moth-eaten cashmere scarf.

Sometimes the Brain would muse that if only he abstained from bock beer for just a couple of weeks or so he could get the old Royal out of hock and set to work on whipping his manuscript into shape, and then it would just be a matter of lugging it over to a reputable publisher.

But two weeks without bock? Even one week?

No, that was asking too much.

And so he continued living as he always lived, going back and forth from Bob’s Bowery Bar (conveniently located in the building next door to the tenement in which Gerry lived) to his little room, and occasionally jotting down a thought with a #2 pencil in a schoolboy copybook.

But Gerry did not despair, because he knew that someday he would find a ten-dollar bill on the pavement, or perhaps on the sawdust-strewn floor of Bob’s Bowery Bar. And once he had that ten-dollar bill it would only be a matter of a month’s modest economizing (perhaps making do one day a week with only cornflakes for breakfast instead of his customary scrapple, eggs, home fries and fried tomatoes) to raise the further two dollars and ninety-nine cents he would need to get his typewriter out of hock.

And so it was on this cold November morning as Gerry staggered around the corner to Bob’s for his eye-opener shot of whiskey and hearty breakfast he saw a quarter lying in full view on the pavement. Without shame he bent over and picked it up.

A quarter. A long way from the $12.99 he needed to redeem his typewriter, but it was a start. If he could only save another quarter every day he would have a sufficiency to reclaim his typewriter in, what, fifty-two days? Let’s round it out to sixty. Two months. Let’s say three months. A mere moment of time in the great scheme of things. He pocketed the quarter and went into Bob’s.

After his usual shot of “Chinese whiskey” (his jocular name for Schenley’s blended American whiskey) and his scrapple, eggs, home fries and breaded-and-fried tomatoes, washed down by two mugs of Bob’s excellent basement-brewed house bock, he was all set to go back upstairs and take his usual leaden nap when he remembered the quarter he had found, which just happened to be the price of a mug of Bob’s house bock.

Gerry fished out the quarter and laid it on the counter.

“I think I’ll just have one more mug of your fine bock beer, Bob,” he said.

Tomorrow was another day, and he would start saving then.