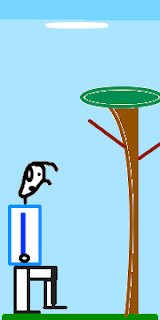 The first week was always the hardest, but this had been the hardest first week ever. Shakes, chills, nausea, hallucinations, insomnia, hysterics, tears, laughing, etc., etc.

But a strange thing happened on the eighth day. Philip had gone to bed very early the night before, without taking any sleeping pills, and for the first time in months or years he slept deeply and soundly and long. He was sleeping so luxuriously, and with such interesting dreams, that he wanted to keep sleeping, but through the world of dreams he realized that he wasn’t dreaming that he had to urinate, that he actually real-world needed to urinate. He opened his eyes and his room was filled with light. He got out of bed and went to the bathroom.

In the mirror was his face, not looking great, but he had seen it looking much worse.

He went back to bed and fell asleep again.

When he awoke again he lay there feeling his body, and what was in it, and, yes, no denying it, he was not in pain. Amazing what something as simple as not drinking for a week could do.

After breakfast and his private session with Dr. Himmelmann, Philip took a walk around the grounds. It was a sunny cool day in early November, the week after election day. Philip hadn’t voted, and not just because he was in the sanitarium. Philip had never voted in his life. There was a grassy slope to the rear of the grounds, and Philip walked down and found a creek he hadn’t known was there, even though he had been to this sanitarium five or was it six times before.

He stood there looking at the flowing shallow water.

Philip turned around, and it was another patient, a young woman he had seen in group, what was her name?

She came down and stood next to him.

“Do you have a cigarette?”

Philip took his cigarettes out of his cardigan pocket, and they both stood there smoking.

“I don’t know the name of a single one of these trees,” said Edna.

“Me neither,” said Philip.

“But they’re nice to look at anyway.”

“Have you been to this place before?”

“Oh, yes,” said Philip. “In fact, I was just thinking, this is my fifth or sixth time. Not to mention a few stays in hospitals.”

Philip had to think for a moment.

“That’s not old. Are you married?”

“Only to the bottle.”

“No, thank God. Not yet. I can’t have kids unless I stop drinking.”

“But what if I have kids and then start drinking again?”

“Yes, that would be a problem.”

They stood there looking at the water flow.

“I’m getting a little cold,” said the young woman.

“You should head back then,” said Philip.

“Yeah. Do you want to come back too?”

“Do you want to sit together at lunch?”

“You said that funny.”

“We’re supposed to be careful about getting involved with other patients.”

“I know. But it’s only human to want to talk to people.”

“Then let’s have lunch together,” said Philip.

She was attractive, even if she was a drunk. But then she was still young.
She tossed her cigarette into the stream, it hissed and flowed away.

She turned and started up the slope.

Philip stood there finishing his cigarette.

As they said in the meetings, it was the first day of the rest of his life. Again.

{Please click here to read the “adult comix” version in A Flophouse Is Not a Home, illustrated by the one-and-only rhoda penmarq…}