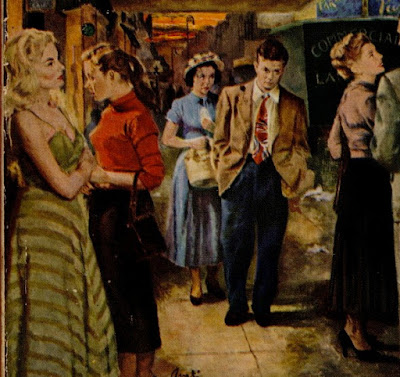 Yes, our dedicated staff of interns and graduate students are still feverishly preparing Volume One of the memoirs of Arnold Schnabel for publication as an actual "book" in time for the holiday gift-giving season, and so, in lieu of any new episodes of Arnold's magnum opus at this time, we present the opening paragraphs of another "lost" novel by Arnold's good friend Horace P. Sternwall...

Pete didn’t mind. Getting fired was just the push he needed. He had just finished a correspondence course in public speaking, and he had saved up close to one hundred dollars, so he packed up a cardboard suitcase and took the bus for New York City, where he intended to realize his dream of having his own radio program, and then people would listen to him, they would listen to him good.

(Cover painting by James Avati. Scroll down the right hand column of this page to find a listing of many more excerpts from the sadly-obscure oeuvre of Horace P. Sternwall.)
Posted by Dan Leo at 11:40:00 PM