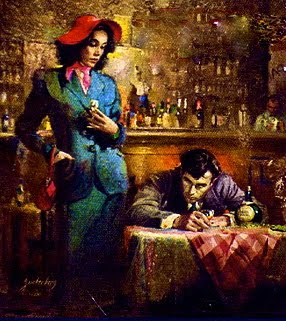 Our staff is merrily completing its painstaking preparations for the publication of Volume One of the Memoirs of Arnold Schnabel in time for the holiday gift-giving season,  and so, in lieu of any new episodes of Arnold's chef-d'œuvre at the present time, we once again present a snippet of a long out-of-print novel by Arnold's good friend Horace P. Sternwall:


The Burglar and the Babe, by Horace P. Sternwall; an Ajax paperback original, 1954; republished as The Burgled and the Damned, by “Harrison P. Shockley”, in paperback, by The Faber Workman’s Library (UK), 1956.

(Scroll down the right-hand column of this page to find a listing of links to the opening passages of some other fine but sadly obscure novels by Horace P. Sternwall.)
Posted by Dan Leo at 11:42:00 PM