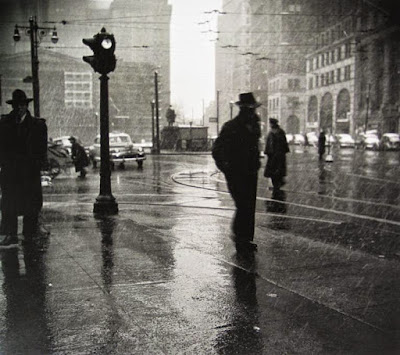 Let’s rejoin our hero Arnold Schnabel on this rainy night in old New York City, as he stands outside the entrance to Bob’s Bowery Bar with his new guardian angel, “Bowery Bert”...

(Kindly click here to read our immediately previous chapter; if you are wondering what all the hullabaloo is about you may go here to return to the very beginning of this Gold View Award™-winning 66-volume autobiography.)

“It is no exaggeration to say that the history of American literature passed through a sea-change with the discovery of that first cache of Arnold Schnabel’s neatly handwritten marble composition books: henceforth this history would be divided into ‘Pre-Arnold Schnabel’ and ‘Post-Arnold Schnabel’.” – Harold Bloom, in the Family Circle Literary Supplement.


My new guardian angel heaved a sigh, which sounded like the rustling of dead leaves in a gutter. He raised his umbrella up so that its ferrule was parallel to his cap, and for a horrible moment I thought he was going to thrash me with it, but after giving it a couple of shakes he lowered it again.

“Not especially,” I said.

“Oh, no,” I hastened to say, as much as I could hasten to say anything, as steeped as my consciousness was in the warm maple syrup of hashish-brownie intoxication.

“No preferred nickname of some sort?”

“I don’t think I’ve ever had a nickname,” I said, someone said, the words came out of my mouth in a comic-strip balloon that fairly soon dissolved like the smoke trailing up from the ancient angel’s little cigar.

“If so then only behind my back,” I said.

“Okay – Bert,” I said, the last syllable sounding to me like a belch.

“Oh, please do,” he said, again with a suggestion of a smile, but the suggestion did seem strained to me, not that this consideration muted my idiocy.

“Do you have a last name?” I said, don’t ask me why, because I doubt I really cared.

“A surname if you will.”

He wasn’t smiling at all now.

“Angels, my dear fellow, do not have last names.”

“Yeah. But I was just, you know, wondering.”

“That’s right,” I said, attempting to force a note of enthusiasm into my voice.

“We angels can of course have nicknames,” he said; “epithets if you will; thus mine: ‘Bowery Bert’.”

“But lookit,” he said, “just call me ‘Bert’. ‘Bowery Bert’ would be slightly cumbersome I think in conversation, don’t you agree?”

“Can I ask you one more question.”

I just couldn’t help myself.

He took a drag on his cigar and looked to his right and over his shoulder, out at the rain that had not ceased crashing down, then he turned back and looked up at me, with those enormously magnified grey eyes of his.

I could tell I was getting on his nerves, so I made it quick.

“But you prefer to be called Bert.”

“I think I indicated that already.”

“I was about to respond to your statement that you think your main problem might be that you are a human being.”

“Oh!” I said, the exclamation being appropriate because I had already forgotten saying this; not that my forgetting having said it made it any less reasonable, to me, anyway.

“And my response, to you, Arnold,” he said, “is that this is one problem I can’t help you with.”

“Nobody ever said it was easy being a human being.”

“'Strictly from hunger' is a phrase I’ve heard used in this context.”

“In short it stinks to be a human.”

“Some suffer more than others.”

“And it all seems very random, I know.”

“Comparatively, I know, we angels have it made.”

“Just as you did not ask to be born a human being.”

“So, sorry, no, can’t help you on the being-a-human-being question.”

“Well, I didn’t really mean to suggest that, uh, you know –”

“Not about what I want.”

“I’m the guardian angel here, Arnold. You’re the human being.”

“I’m beyond wanting anything, thank God.”

He nodded, and took another drag of his little cigar, looked again to his right, out at the street and that unabated downpour. The smoke trailed out of his dry old mouth and disappeared into the universe. After a few moments during which I forced myself to hold my peace, despite the fact that my skull was teeming with stupid questions and observations, he turned his little head back to face me.

“You said you wanted to go home,” he said.

“Do I take it then that this is your primary wish? I mean, putting aside the desire not to be a human being, and all the heartache and tediousness that entails?”

He sighed, again, understandably. He rapped his umbrella on the pavement a couple of times, as if to make sure that all the rainwater was off it, but I knew that wasn’t the reason. Then he suddenly spoke.

“And is this still shall we say your primary desire?”

He tapped his De Nobili with the forefinger of the hand that held it, and once again the ash tumbled down onto my shoe, the right one. What did I care, my shoes were filthy already, and wet.

“Where do you live?”

He sighed again. He tapped the tip of his umbrella on the pavement again, once, twice, three times.

“Just tell me where you live, please, Arnold,” he said, when he had finished tapping. “An exact address would be appreciated.”

“I live in another dimension,” I said.

“Great,” he said, after what at least seemed to me like a long pause. “And where exactly if I may ask is this other dimension?”

“It’s not so much where it is as what it is,” I said. I knew I was really getting on his nerves now, so I hurried it along. “You see, I am from this dimension known as ‘reality’, and the dimension I am in now is a fictional reality.”

He took another long pause here, and who could blame him? He turned and looked out at the Bowery, at the rain, at I don’t know what. Finally he turned back to me.

“All right,” he said. “So now we’re getting somewhere.”

I was standing on my left leg now, leaning against the brickwork of the entranceway with one hand, but then of course my left knee started to hurt.

“Yes,” I said. “Look,” I went on, through gritted teeth, “I’ve been standing here too long I’m afraid. I injured both my knees tonight, a night which seems as if it’s been going on for three years and eight months now, and I’m afraid if I don’t sit down soon I am going to collapse.”

Again he paused, again he sighed.

“Why am I getting the feeling that that’s all you really wanted to do all along?” he said.

It was just at that moment that the pain in both my knees finally got the best of me, and I did begin to collapse, sideways, sliding down the wall to my left like some great slug, but the little fellow quickly stuck his cigar in his mouth and, hooking the handle of his umbrella on one of his forearms, he caught me in both his thin small arms, holding me up and preventing me from falling to the pavement with a strength that seemed at first surprising until I remembered that he was not a mere tiny old man but an angel, and thus possessed of superhuman strength.

Then, and not for the first time that night, I passed out.

(Continued here, and onward, at the same stately and measured pace.)

(Photograph by Arthur Leipzig. Please turn to the right-hand column of this page to find a purportedly up-to-date listing of links to all other cybernetically-available chapters of Arnold Schnabel’s Railroad Train to Heaven©. And click here to order a copy of the new paperback edition of our friend Kathleen Maher’s most excellent novel Diary of a Heretic!)

Oh again, thank you, Dan! Great title to this one. I like what you did with: Can I ask you a question? Maybe Bert isn't the devil. He's tired of nonsense but not smarmy.

I liked this title too! Sort of leaves the gate open for all sorts of possibilities...