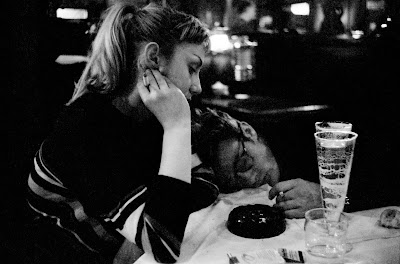 Our hero Arnold Schnabel has been rejoined by his old comrade-in-adventure Ferdinand, the talkative fly, on this wet hot night in August of 1957, here on MacDougal Street in that Mecca of Bohemia known as Greenwich Village…

“So I’ve decided to cancel my fall seminar in Shakespeare’s tragedies and instead ‘do’ the first six volumes of Arnold Schnabel’s massive masterwork, and frankly I couldn’t care less what the department has to say about it.” — Harold Bloom, in The Yale Daily News.


“Do you really think you can help me, Ferdinand?” I said.

He described a quick zipping circle, rising up about a foot, and then coming back to hover at exactly the same spot about six inches from my face.

“Is what you’re asking me.”

I suppressed an urge to scream an imprecation. I took a breath.

“Well, my answer to that question, my friend,” he said, “is how the hell do I know? What do any of us really know for sure? But I’ll tell ya one thing, pal, I’m gonna give it the old college try.”

“You are most entirely welcome.”

I shifted around on the step I was sitting on. The seat of my jeans was pretty damp by this point.

“Okay,” said my friend, the fly. “First things first. What say we drop into that pleasant caravanserai down there and wet our whistles while we talk over our options.”

He was still hovering there in front of my face, but sort of gently rising up and down.

“This was really hard,” I said. “And not for the usual reasons.”

“Lookit, Arnie,” he said, “I’m talking about one lousy beer. And I ain’t asking you to let me drink out of your glass, I know how you humans are about that kind of thing. As I have told you, I too was human once, and all is ask is that you splash a couple of droplets on the bar top for me to drink.”

“But can’t we wait till we get back to my world?”

“Well, we could,” he said. “Yes, of course we could do that. I mean, you know, if it’s too much trouble for you, after I came all of the way through your brain and into your fine mind and out again and into a whole new dimension just to see how you was doing. Sure. We could do that, I guess. Even though I was only talking about just a tiny drop of beer to quench my thirst. But, you know, hey, if it’s gonna put you out that much –”

“Look, I’ll be honest with you, Ferdinand.” For some reason I found it hard to call him Ferdy, but he let it go this time. “I’m afraid to go in there again,” I said.

“Things happen to you.”

“Okay, go ahead,” I said, and now, to tell the truth, I was starting to want a beer.

“Tell me something, Arnold.”

“That is if I may be so bold as to ask you a personal question.”

“Tell me something, Arnie – have you yourself ever woke up one fine morning and found yourself transformed into a fucking fly?”

“Then do me a favor, don’t talk to me about things happening to you.”

A beer was sounding better by the second.

“But lookit,” he said, “you don’t want to go in that bar downstairs, fine, this town is crawling with gin joints. Let’s just go across the street to the Kettle, or down the corner to the San Remo, it don’t matter to me.”

“All right,” I said. “But can we please really just keep it to one beer, and then try to figure out a way to get me back to my world?”

“Great,” I said.   I put my hand on the iron railing and hefted myself up, as carefully as I could. I put some weight on the right leg.

“It hurts,” I said, which it did, “but I should be able to make it across the street.”

“Kettle of Fish then?”

I picked at the damp seat of my jeans.

“They all know me there.”

“At the Kettle? They love you there, man.”

“I want to go where no one knows me.”

“Okay, fine,” said Ferdinand. “So we go down the San Remo. Six of one, half-dozen the other far as I’m concerned.”

“Josh is still down in there, in the what do you call it.”

“The Valhalla I believe that establishment is called.”

“Right,” I said. “He’s supposed to be getting me some aspirin.”

“And how long’s he been in there now, a half hour?”

“Ten, fifteen minutes he’s been in there, and you’re still gonna wait for him? You told me he was sozzled, right?”

“Yes, he has had quite a few I suppose.”

“You shouldn’t say that about him, Ferdinand.”

“The F-word. I mean, considering who he is.”

“Hey, you said he wants to be human, right?’

“Then he gets treated the same as any other human. Oh, what, you gonna pout now?”

“I mean, we can stick our heads in real quick, tell him where we’re going if you want, I don’t mind.”

“Oh, Christ almighty,” said Ferdinand. “Look, you got a dime?”

“Here’s what we do. We get to the San Remo, you go to the phone booth, you look up the number of the Valhalla in the directory, you ring ‘em up and you ask for Josh.”

“You get ‘em on the horn and you tell him where we are. Or you give the message to the bartender or the maître d', whoever picks up the phone.”

“Let him bring that stuck-up bitch Carlotta and her friend too if he wants.”

“Good, I’m glad we got that settled,” he said. “Now, let’s make like a cool breeze and blow. My throat is so dry I feel like I could drink a whole goddam ounce of beer, maybe two.”

I had been holding onto the railing through all this, and now I finally let go of it, and took a step. Ferdinand flew to one side so I wouldn’t bump into him with my face.

“I’d offer you my arm to lean on, but I don’t think that would be much help.”

I started limping down the sidewalk, Ferdinand merrily whizzing around my head.

I heard a woman’s shrieking voice behind me.

“Fuck you, Julian, how dare you run off and leave me!”

“What is it?” said Ferdinand.

“It’s that girl, Emily,” I said, and I started walking faster.

“What, that crazy chick, the one you boned?”

“I didn’t bone her,” I said, through clenched teeth, and now I was practically running, bad knee or no bad knee. “Porter boned her.”

“But you’re Porter,” said Ferdinand. I was moving quickly now, but he kept up with me easily, not even breathing heavily.

“Fuck you, Julian!” said Emily’s voice behind me. “You big jerk!”

“Now, Emily,” said my publisher Julian’s voice, “you know I have to go to work in the morning.”

“Since when did you ever show up at the office before eleven?”

I didn’t wait to cross at the corner, but hurried across MacDougal at a diagonal.

We got to the corner of Bleecker and MacDougal, I turned it and pushed open the door of the San Remo Café, and Ferdinand flew in with me.

I was panting and sweating, my knee hurt like hell again, and now more than ever I really, really wanted a beer.

The place was crowded, packed with yelling and laughing people, and a jukebox played some jazz song.

I saw a small open space at the bar and headed for it.

Ferdinand of course was right with me, buzzing in a halo around my head.

(Continued here, and on and on, ceaselessly.)

(Kindly turn to the right-hand column of this page to find a possibly current listing of links to all other available chapters of Arnold Schnabel’s Railroad Train To Heaven™. Now published also in the Collingswood Patch™: “South Jersey’s last and final hope.”)

If Ferdy and Arnold ring Josh while bar-hopping then maybe I wasn't crazy to assume "A Brief History of Time" was poetry (not popular science), what with quarks becoming charm or strange, tops or bottoms.
(I know--just enjoy the story. And of course I am! But more and more RRTTH seems as if it could redeem me from lifelong ridicule.)

Okay, I just might have to break down and read A Brief History of Time now, Kathleen. I trust the book is brief?