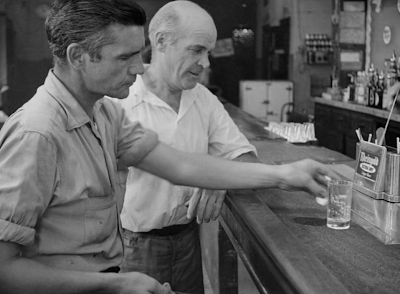 Let’s rejoin our hero Arnold Schnabel, sitting on a stoop on Greenwich Village’s MacDougal Street, on a hot wet night in August of 1957, where he has just been joined by an old friend – Ferdinand, the loquacious fly…

(Kindly click here to read our previous chapter; if you really have absolutely no other way to waste your precious time you may go here to return to the very first chapter of this Gold View Award™-winning 73-volume autobiography.)

“Is there any joy more profound than starting a never-before-read chapter of Arnold Schnabel’s massive and glorious chef-d'œuvre? No, I think not.” — Harold Bloom, in The Journal of Geriatric Nursing.

“We was starting to get worried about you, pal,” he said.

“Sure,” he said. He flew around in a lazy curlycue and then stopped and hovered again about six inches from my face. “What, you think your pals don’t worry about you?”

“You’re lying there on the floor, passed out cold. We halfway wondered if you had pitched a thrombo or something, but I buzzed around your face and I could see you was still breathing – so what the hell happened to you, anyway?”

“Oh, threw my back out, trying to open that window at Mr. Arbuthnot’s place.”

“I figured that was it,” said Ferdinand. “What, sacroiliac?”

“Maybe,” I said. “To tell the truth I’m not quite sure what a sacroiliac is.”

“Me neither, but it sounds impressive, don’t it? Gee, you should’ve heard old man Arbuthnot, ha ha. He was terrified he was gonna have another stiff on his hands.”

“Yeah, like Mr. Jones. That old dead guy you went into the afterlife after and brought back to the world of the living.”

“It only happened a few minutes ago, pal.”

“Well, in one sense I suppose it did,” I said. “But, you see, apparently this universe we’re in now is in a different um, time-space, uh –”

“Yes, exactly,” I said, as if I were some kind of expert on the subject, although, now that I think about it, I was perhaps on my way to becoming one.

“Well, thank you,” I said. “I appreciate the concern, I really do.”

Once again he flew about, making a couple of deft Immelman turns, zooming up into the streetlamp light and out past the sidewalk to MacDougal street and back again to hover rather close to my nose.

“I gotta say it’s great to be back in the Village though,” he said, not even slightly out if breath. “Back in New York. The smells of garbage and beer and tobacco and human sweat, I love it. I mean, Cape May is nice and all, for a visit, but I guess I’m just a city boy at heart. Hey, you still look a little green around the gills, pal. Back still paining you?”

“Pally pally pal of mine. Say, I guess by no stretch of the imagination you would have a cigarette on ya, wouldja, just so’s I could have a tiny flake of tobacco to chew on?”

“Well, it’s just I got tired of waking up every morning coughing up phlegm –”

“Awright, awright, you don’t gotta explain yourself to me, pal. Y’know,” he said, in what seemed like a pensive sort of way, if a fly can seem pensive at all, “maybe when ya think about it that’s one of the nice things about being a fly. Our life span is so damn short we got no time to worry about good health habits. We just do whatever the fuck we wanta do and try not to get swatted while we’re doing it.”

“Um,” I said, (as I’m afraid I so often do when I have nothing to say but the prospect of remaining silent seems even more socially awkward than making an inarticulate noise).

“So, you gonna stay here or what?” said Ferdinand.

“Ain’t it always a long story with you?”

“So gimme the Reader’s Digest version.”

I shifted around a bit on the step I was sitting on. The seat of my jeans was sticky from sitting on the wet step, but I didn’t care too much, it felt so good to take the weight off my sore knee.

“Remember my friend Josh?” I said.

“Sure, the drunk guy, son of God supposedly.”

“Right,” I said. “Well, after I passed out from the pain in my back I decided to ask Josh to cure my back.”

“Taking advantage of your personal friendship.”

“Not that I cast no aspersions y’unnerstand,” said Ferdinand. “Who am I to toss the first brickbat inside a glass house? You were in pain. You had a personal friend – acquaintance anyway – who just happens to be the one and only son of the big guy upstairs himself. And I ask you, who else would be more qualified to help out a guy with a bad back? I’m in your shoes? I assure you I do the precise same thing myself, no question about it.”

“No one should think the worse of you, pal.”

“Fuck ‘em if they can’t take a cosmic joke and accept the basic unfairness of life.”

“I see. Looking for this Josh guy.”

“So’s he could perform a miracle on your sacroiliac.”

“Whatever. Them things can be very painful.”

“So I take it you found him, because your back don’t hurt no more.”

“Well, here’s the thing,” I said. “As soon as I turned up in this universe my back didn’t hurt at all, I guess because I’m Porter Walker in this world.”

“I get it. Sure, that makes sense. But it didn’t take you long to fuck yourself up in some other ways, did it?”

I rubbed my knee again. The pain had lessened now that I had taken my weight off it for a while, and my head really didn’t hurt that badly.

“I am,” I admitted. “You see, after a whole lot of other stuff happened, I did find Josh eventually, and after we finally got a chance to talk he said he would help me, even though by that time I asked him not to.”

“Very sensible. If he really is the son of God then who are you to tell him how to do his job?”

“Well, I never really thought about it that way, Ferdinand, but –”

“The son of God couldn’t send you back to your own world.”

“No,” I said. “But it’s complicated. You see, here’s the thing: apparently he’s been drinking all day –”

“You see, he says he’s in love with Carlotta – you remember her?”

“That stuck-up brunette in the red dress, yeah, I remember that lesbo.”

“She’s a stuck-up bitch, though, you’ll grant me that.”

“Whatever. It’s beneath me even to discuss a cock teaser like that.”

“So what’s up with this Josh guy? You telling me he ain’t the son of God no more?”

“Ferdy, I just don’t know. All I know is he tried to send me back to my world and I’m still here.”

“He went into the bar to get me some aspirin for the pain in my leg.”

“Well, as I said,” I said, “he’s been drinking quite a bit. He probably got distracted.”

“Probably by that dame Carlotta.”

“He’s probably having another drink, too.”

“I mean, if he is the son of God, that means he can pretty much do whatever the fuck he wants to do, am I right?”

“So if he wants to become a human who’s gonna stop him?”

I thought of H.G., otherwise known as the holy ghost. Yes, even H.G. hadn’t stopped Josh from doing what he wanted to do. (Although, admittedly, I had had a hand in all that, too.)

“Okay, well, whaddya say we get you back home then?”

“But how?” I said. “Josh tried and he couldn’t do it, and just now I really concentrated and tried to will myself back, and I couldn’t do it either. I don’t know what to do.”

“Ah, but you forget one thing, old pal.”


(Continued here, bashing on regardless.)

(Please go to the right-hand column of this page to find a reasonably-often updated listing of links to all other officially released chapters of Arnold Schnabel’s Railroad Train To Heaven™, available free, gratis and for nothing as a service to humanity. Now published also in the Collingswood Patch™: “Proof that there are still some faint flickerings of intellectual activity in South Jersey, for the time being at least.”)

Glad Ferdinand has returned! I imagine he can dash around the time-space continuum and even bring a friend. Maybe a short life has its privileges.

Again, I mixed up. The remarks above were intended for Collingswood (where you might find them repeated.)
For the blog, I meant to get personal:

Wish my teachers had been as sensitive to etiquette as Ferdinand. When I asked if pestering the Trinity for the purity of my soul was piggish compared to praying for world peace, the answer was, "never apologize for desiring purity." In fact, I got the impression it ranked with prayers that the Chicago Cubs miraculously win a pennant.

The poor Cubs. You'd think the Big Guy would smile on them at least once in century or so...