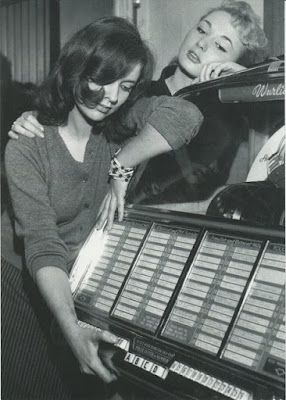 Let’s rejoin our hero Arnold Schnabel, in the midst of yet another awkward moment, in a smoky and crowded Greenwich Village bar called Valhalla…
(Please click here to read our immediately preceding episode; potential new converts may go here to return to the very beginning of this Gold View Award©-winning 56-volume memoir.)
“Just the other night I made the mistake of taking my new Kindle into the bath with me. I became so absorbed in the latest volume of Arnold Schnabel’s masterpiece that I lost track of the time and was only liberated from this absorption by the sudden realization that I was shivering like some great pale aspen leaf due to the fact that the tub water had become quite frigid if not absolutely gelid. Fortunately I avoided catching my death of cold.” -- Harold Bloom, in Man’s Adventure.

“Fuck you,” she said. She thrust her change back into the pocket of her apron, then turned and stared down the length of the bar, smoking her Camel. The bartender was down there towards the middle, filling two beer pitchers from two different taps, with a cigarette in his mouth.

All I had to do was wait for the bartender to finish completing Harriet Beecher Stowe’s order, and I could ask him for some change, but the hostility emanating from the lady was too much for me to bear. I started to step past her, but she turned and glared at me.

“What about your goddam cigarette change?”

“What do you want to do, live forever?”

“All you had to do was admit you hadn’t read my book.”

“Do you want me to give you some change?”

She stared at me for a moment and then turned away again.

I went past her. I had to find Josh.

The whole room had gotten more crowded somehow just in these past few minutes. Not only was the bar packed three-deep, but a dozen or so people were now dancing to the rock-and-roll music in the narrow space between the bar and the booths. Two girls bent swaying over the juke box studying the song selections, a blonde in a black dress, a brunette in red. I tried to squeeze past them.

“Hey!” the blonde yelled, “Who touched my ass?” She turned, and it was Pat, my neighbor in Mrs. Morgenstern’s building, down at Bleecker and the Bowery. And next to her was Carlotta.

“Well, look who decided to come back in out of the rain?” said Carlotta. She was smoking a cigarette, as was Pat. It seemed like everyone was smoking except for me.

Both the girls just looked at me.

“Where did you disappear to, anyway?” said Carlotta.

“You were trying to escape that Emily chick, weren’t you?” said Pat. “Not the waitress Emily but the other Emily.”

“Chicks like that don’t mind playing up to more than one guy,” said Carlotta.

“Help us pick some tunes out on the Wurlitzer, Porter,” said Pat.

“Good luck with that,” said Pat.

“I’m gonna pick another song,” said Pat, and she turned and leaned forward over the juke box. Her backside touched my inguinal area, and I stepped back, bumping into someone who was dancing. Carlotta laughed and took my arm.

“Come here a minute,” she said, and she pulled me over the few feet to the cigarette machine and somehow guided me into the corner between the machine and the wall. She came up very close to me, pressing the heels of her hands against my shoulders, a cigarette in one hand.

“That Betsy girl’s too nice for you. And that Emily is too crazy for you.”

She pressed closer to me. She felt warm and she smelled good.

“Did you really come back here just to talk to your friend?”

Should I tell her the truth? That Josh was the son of God? That both she and I were characters in a madwoman’s bad novel? But perhaps even the latter was not the truth. Perhaps this was reality, and my other life, my life as Arnold Schnabel, perhaps that whole world was a fantasy. Perhaps both these worlds were fantasies and reality was something else entirely.

She was pressing so close to me now that she had to arch her back to look up into my eyes.

“Wait a minute,” she said, again. Her head was slightly cocked to one side. “You don’t swing both ways, do you, Porter?”

“What does that mean?”

“Oh, never mind. I guess if you have to ask. And besides, if that thing I suddenly feel down there pressing against me is any indication then I suppose I shouldn’t worry.”

It was true, she had caused me to suffer an erection.

“Don’t say anything,” she said. And she put a fingertip on my lips. The nail of the finger was painted red, the same color as her lips and her dress. “Go talk to your friend, Porter. We’ll be out here.”

“Do you think you’ll be long, handsome?”

“Pat thinks I’m an idiot for liking you.”

I looked over her shoulder. Pat was still leaning over the juke box, holding her blond hair back with one hand, the colored lights reflecting on her face as she studied the musical offerings, her rear end moving back and forth in time to the rock-and-roll music.

I looked into Carlotta’s face. Her dark hair fell over one eye, and her other eye looked up into mine.

She touched my face with the hand that held the cigarette.

“Go,” she said. “Go talk to your friend Josh before he gets even more blotto. We’ll be out here.”

I slid away from her, her fingers trailing over my body as I did so. I went past the cigarette machine, aware now that I was almost soaked through with sweat. I walked slowly, because of my erection, and I put my hands in my jacket pockets and pushed the material inward and down, hoping to disguise my condition to at least the casual observer.

I continued past the last booth and into the little passage with the door on the right that said “Private” and then the one on the left that said “Basement No Admittance”, and I started to turn right into the hallway that led into the back room, but down near the other end I saw Emily and Julian, both of them standing sideways to me, facing each other. I was just in time to see Emily slap Julian in the face.

Quickly I ducked back around the corner. Then I heard their voices.

“I think I should take you home, Emily,” said Julian’s voice.

“Don’t you worry about me making it in, buster!”

“You don’t do any work, and you never come in before eleven anyway!”

“Well, if you’re going to quibble, well, good night then.”

“Wait up, you big bastard!”

I could hear their footsteps coming closer, Julian’s heavy and somehow desperate tread, Emiy’s clacking angry heels. I had to escape. I turned. On the right was the door to the basement. I certainly didn’t want to go down there. But to the left just up ahead was that other door, marked “Private”. Maybe I could hide in there just for a moment until the coast was clear. I quickly went over to it and tried the knob. It turned. I pushed, and the door opened inward, to darkness. I went in and quickly closed the door behind me.

(Continued here, the end is not even remotely in sight.)
(Please look to the right-hand column of this page to find an up-to-date listing of links to all other officially available episodes of Arnold Schnabel’s Railroad Train To Heaven©. This week’s episode brought to you by Hydrox™ cookies, the official snack of this year’s Arnold Schnabelfest, to be held next weekend at the Pvt. Raymond T. Osmond VFW Post at Chew and Lawrence, Philadelphia PA, featuring a marathon 48-hour dramatic reading by the Olney Community College Thespian Club. Tickets still available.)

Glad you dug it, Deano!

For me, this episode begs the question: If Josh is drunk, is his Father also drunk, and his Spirit?
(Answer urgently needed.)

Ha ha -- that's an excellent question, Kathleen, and I have no idea what the answer is! Perhaps in future episodes of Arnold's memoirs we will get to the bottom of this...