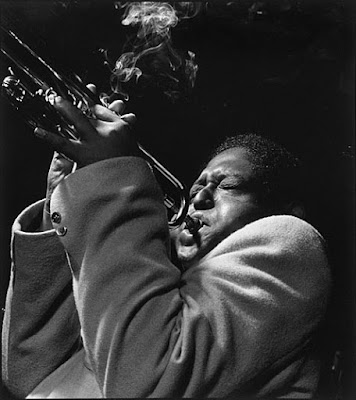 Our hero Arnold Schnabel has been exiled by the prince of darkness into the lurid pages of Ye Cannot Quench, a regrettably long out-of-print novel of love and lust in 1950s New York City. In his current role as “Porter Walker, handsome and romantic young poet”, he has just entered that Greenwich Village cynosure of Bohemia the Kettle of Fish with his neighbors Pat and Carlotta (along with Porter’s new “friend”, an unnamed but very talkative fly). Arnold (or Porter) had been trying to keep a date with Betsy, the apparent younger self of his inamorata Elektra, but somehow with one thing and another he is almost three-quarters of an hour late, and she is nowhere to be seen in the crowded bar. However, jamming furiously at the far end of the room Arnold sees a few of his old acquaintances from his previous life: the aged accordionist and singer Freddy Ayres, his almost equally-aged wife the saxophonist Ursula, and, tickling the ivories, Ursula’s granddaughter Magda. You now know as much as I do...


(The bewildered may click here to read our previous chapter; go here to return to that long-ago beginning of this Gold View Award™-winning and seemingly endless memoir. “One page of Schnabel packs more punch than fifteen rounds with Rocky Marciano.” -- Harold Bloom, in Boxing Illustrated.)

I made my way through the bar, closer to the band. Fifteen or twenty other people were standing there, listening to the music, nodding their heads, occasionally, yelling, “Go! Go!” or “Too much!” or “All the way, baby! All the way!”

Gabriel looked the same as ever, angels don’t grow old, so why would they grow younger? He had sunglasses on and what looked like the same sharkskin suit and porkpie hat he had been wearing the one other time that I had met him. Magda though did look younger, which of course she would have to be. But, strangely, Freddy and Ursula both appeared to be just as old as they had been (or would be) six years in the future. Magda and Ursula were both dressed much as they were when last I saw them, that is as if they were attending a formal banquet in ancient Rome; Freddy however was not wearing the gold tuxedo jacket which was the only thing I’d ever seen him wearing, but instead wore a tan summer suit and a matching Panama hat.

It had probably never occurred to me that I might be happy to see Freddy and Ursula and Magda again, but I was, and indeed I felt my heart leaping with joy and relief at the sight of Gabriel. As strange as it was to find this crew here, at least they were inhabitants of my other life, that life I persisted in thinking of as my real life, and perhaps their presence in this place was a further indication that, even if I couldn’t yet free myself entirely from the confines of Miss Evans’s novel, perhaps I could rewrite it more to my own fashion.

Ursula was in the midst of a solo, bending forward and leaning backward with her instrument, sometimes thrashing her frail torso from side to side as somehow her tiny withered lungs sprayed out cascades of screaming notes, Freddy watching her all the while and nodding his head as his ancient fingers scrabbled at the keys and buttons of his accordion. Magda seemed almost to be playing another song, striking staccato chords with her left hand as her right hand picked out its own subtle melody wandering dreamily through that thick cawing jungle of music produced by her grandmother’s saxophone. The large bass player thumped his strings with his enormous hand, producing a sonic boom with each thump that actually seemed to blow the clouds of cigarette smoke away from him as if he were a large oscillating floor fan. The bongo player, who seemed oddly familiar (or maybe just odd) played four times as fast as anyone else, pounding away in an apparent ecstasy, the sweat pouring from his face like rain and dancing off the skins of his drums and into the faces of the people in the front rank of the audience.

Then Ursula abruptly tore her lips away from her saxophone, almost in mid-note. The people standing around me all hooted and clapped. Ursula acknowledged the applause with a nod, then pointed to Gabriel who immediately raised his horn to his lips and began his own solo.

I stood and listened. I was quite close to the band, but I couldn’t tell if Gabriel had noticed me. Did he know who I was? That is to say, did he know I was Arnold Schnabel? His features behind the dark glasses were unreadable as his cheeks swelled and contracted with the music he now blew through his trumpet and into the room.

I hadn’t actually heard him play before, and I have to say he sounded pretty good to me, even though I’m not much of a jazz buff. The other musicians seemed to keep playing pretty much what they had been playing before, and in the same way, but unlike the volcanic squalling that Ursula had been forcing out of her instrument, Gabriel now produced a sad deep blue river of music that seemed to flow into my skull and wander around in the vast empty wastelands of my brain as if in search of some lost ocean of peace and calm.

Ursula had sat down on the end of the piano bench, facing away from the keyboard. One of her fans had offered her a cigarette and a light, which she accepted, and she sat smoking, her sax across her lap, staring out into the room, nodding her head slowly along with Gabriel’s solo. I half-heartedly raised my hand in a salutational gesture, but she didn’t seem to notice it, or me.

I don’t know how long I stood there, but I was happy, for the time being

Someone touched my arm.

It was Betsy. Elektra. Betsy.

“Are you digging Gabe’s blowing?”

She had changed her clothes. She had on the sort of dress that I think is called a shirtwaist, blue pinstripes of a soft-looking sort of bubbly material, no sleeves but with a white collar and a white cloth belt. She carried a wet furled umbrella, dark blue, and a dark blue purse.

“I’m sorry I’m late,” she said. “I went home to take a bath and change, and I fell asleep. I hope you don’t think me horribly rude.”

“So we’re both not very punctual.”

She turned her head to look at Gabriel. I looked at her. Then I too looked at Gabriel, and listened to the music. Betsy stood next to me, her arm touching mine. Even amidst this dense atmosphere thick with the smells of smoke and sweat and beer and whiskey I could detect her fragrance, it reminded me of the smell of my aunts’ garden when I would sit on the porch reading crime novels on a rainy morning.

I realized that I was as happy now as I had ever been.

After a while we would have to talk some more, have a beer or two, but, for now, this was good…

Someone put a hand on my shoulder.

“Porter, old man, I take it that you are -- in your parlance -- digging that crazy trumpet?”

It was Nicky. Lucky. Nicky.

(Please refer to the right hand column of this page to find a completely up-to-date listing of links to all other published chapters of Arnold Schnabel’s Railroad Train To Heaven©. Now being broadcast live on Tuesday nights at 10:00 (EST) on the Dumont Television Network, starring Dane Clark as Arnold Schnabel, hosted and introduced by Oscar Levant, with music by the Red Norvo Quintet.)

No! No Nicky!! Arnold's as happy as he's ever been. Of course it's time for Nicky. Grrrr.

Eletra/Betsy has almost (almost) better timing than Lucky. Terrific description of the music and the moment.

Loved the song, too, and noticed Jimmie Rodgers is not only The Singing Brakeman but his double CD offers "Blue Yodeling." Blue yodeling seems extra-special to me--like that river of sound from Garbriel's trumpet.

Jen, yeah, ol' Nicky's like the ultimate bad penny, always turning up at the most inopportune moment...

Kathleen, nice that you picked up on the singing brakeman thing, but even I didn't pick up on the dual yodeling motif! The ladies must've been fond of Jimmie Rodgers...

Manny: all the way, daddy-o!