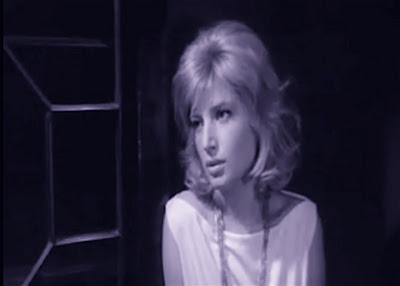 Our previous episode concluded with Arnold’s friend “Josh” nodding off at the red kitchen table of an oddly spacious apartment upstairs from the Pilot House (“Featuring the Musical Stylings of Freddy Ayres and Ursula™, as Seen on 'The Chief Halftown Show' on WFIL TV!”), on this historic night in August of 1963, in the quaint seaport of Cape May, NJ.

(Click here to go to the beginning of this Gold View Award©-winning memoir, soon to be presented as a 37-part series on The Philco Television Playhouse, hosted by Edward Everett Horton, featuring Laurence Harvey as Arnold and Michael Parks as Josh; special guest star Monica Vitti as Magda; musical interludes by the Jackie Gleason Orchestra with the June Taylor Dancers.)

His head came up, his eyes opened.

“What? To the Sanhedrin?”

“What did he say?” said Magda.

But then he folded his forearms on the table, parallel to his chest, and he laid his head face-down on his wrists.

“What is this Sanhedrin he’s talking about?” said Magda.

“You should let him stay here,” she said.

She had been holding the empty water glass through all this. She put it down on the table now, and then ran her fingers over Josh’s long sun-bleached hair.

I wondered: what was the worst that could happen if I let him stay here?

“We have a spare bedroom,” she said. “He’ll be quite comfortable. Then he can go home in the morning. If he wishes to. I will take good care of him.”

Something in her tone of voice told me to give it one more try. I had already just barely avoided the destruction of the known universe once today.

I went around the table and put my hand on Josh’s shoulder.

I shook his shoulder again.

Suddenly he sat up straight. He turned and looked at me, and then at Magda.

“I had the strangest dream,” he said.

He pushed his chair back and stood up, almost knocking the chair over, but I grabbed it in time.

Magda put her hand on his arm.

She removed her hand and touched her fingertips to that sparkling string of pearls on her bare chest.

From the other room the drums and the chanting continued, and under them, faintly, crackled the laughter and dry shouting of degenerate old people.

“Are we in Africa?” Josh asked.

“Oh,” said Josh. He patted his trouser pockets, then his shirt pocket, and brought out his crumpled pack of Pall Malls. “Cape May,” he said, and he shook the pack, put a cigarette in his lips.

She peered into the proffered pack, poking the cigarettes around with her red fingernail, found one that was acceptable, and took it out.

Josh shoved the pack back into his shirt pocket.

I wondered how I would survive -- if I could survive -- the rest of my life without these little smoking rituals to give it at least momentary meaning and purpose.

“You look familiar,” Josh said to her.

“What ever is the matter, my dear fellow?”

“Josh is just saying,” I said, trying to save the day, or the night, or the universe, “Jesus Christ, he drank too much. Right, Josh?”

I patted his back, in an imitation of masculine conviviality.

“You certainly are plastered,” she said. “Now how about a light?”

Josh patted his trousers pockets again, brought out his Ronson, and Magda and I watched as he flicked it open, thumbed it alight, lit her cigarette and then his own.

“I was telling your friend Arnold,” she said, exhaling smoke slowly from the side of her mouth “that you should stay here. In our spare bedroom.”

“And where am I?” he asked, in all innocence, exhaling a great cloud of Pall Mall smoke and coughing.

“You’re in Freddy and Ursula’s flat. Above the Pilot House. Ursula is my grandmother.”

“I see,” he said, obviously trying to act at least somewhat sober. “Staying here for the summer, are you?”

“And are you enjoying your stay?”

“I always enjoy myself.”

”An admirable quality. What is your secret?”

“Ah. You neither sow nor reap.”

“And God feedeth you?”

“No, but Freddy and Ursula do.”

“I am their pride and joy. Their vision of youth and beauty.” She put her hand on Josh’s arm. “Come,” she said. “I will take you to the bedroom.”

“Or I could walk you home, Josh,” I said, ignoring the invisible daggers shooting my way from Magda’s flashing blue eyes.

“Oh, would you, Arnold?” he said. “I think a breath of fresh air would do me good, actually.”

“I could open your bedroom windows wide,” said Magda.

“Well, thank you very much, Magdalene --”

“Magda,” said Josh. “But I really should be getting home I think.”

“Say tomorrow downstairs at noon. Unless you’ll be at church of course.”

“Smart man. We’ll have a hair of the dog and then I’ll bring you up here again -- if that’s okay with Arnold --”

“And I will make you breakfast. How does eggs Benedict sound?”

“Some borscht, and vodka.”

“Come,” she said. “I’ll walk you to the stairs. I know your friend Arnold is just dying to split this joint.”

She waved her cigarette dismissively.

“Put the excuses in a tin can,” she said. “Save them for a rainy day. Let’s go. I need my beauty sleep.”

(Continued here, because we must. Kindly go to the right hand column of this page to find what may very well be an up-to-date listing of links to all other possible chapters of Arnold Schnabel’s Railroad Train To Heaven©. “One of the great Catholic confessionals, perhaps the greatest since Augustine.” -- Bishop Frank X. Fogerty, SJ, in “L’Osservatore Romano”.)

I wondered: what was the worst that could happen if I let him stay here?

Hi Dan- who's the woman in the photo?? It's making me think of Lois Nettleton, but I don't think it is.

What would be the worst? Arnold fears a universal shake-up, but...oh wait, I forgot what a spoiled princess Magda is.
Still, only because Josh thinks better of spending the night, am I tempted to think that now Arnold is Josh's savior, if only in this small way.

Kathleen -- yes, it does seem that the "savior" roles are being reversed here -- although Arnold hasn't got Josh out of the Ayres' apartment yet! (Or even the kitchen, for that matter.)

Jen -- so glad you asked about our cover model. It's one of my favorite actresses from the 60s, Monica Vitti. I think the current shot is from the movie "L'Eclisse". That's also Vitti appearing as Magda in the photos accompanying chapters 157 and 158.

PS -- I just found out that Lois Nettleton was a former Miss Chicago and studied at the Goodman Theatre. Was married to Jean ("CHristmas Story") Shepard, and was the understudy for Barbara Bel Geddes in the original 1955 production of "Cat on a Hot Tin Roof". I love this kind of stuff...she also appeared in lots of the great TV series of the 60s -- Twilight Zone, Hitchcock, Route 66, Naked City, Then Came Bronson...

I had absolutely no idea she was married to Jean Shepard! I definitely remember her from 60's TV.

It gets even more interesting, Jen. According to Wikipedia, Lois "...was the first caller to Jean Shepherd's late-night radio program on WOR-AM. She became a regular guest, known to listeners as "The Caller," and they married in 1960, divorcing seven years later."

If Arnold's not careful, his memoir could end up on a list of banned books, next to 'The Last Temptation of Christ'. (Of course, most banned books end up selling pretty well)

Say, I think you may have hit on a brilliant marketing ploy, Manny!