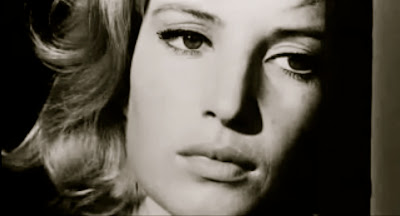 In our previous chapter our hero Arnold Schnabel made the acquaintance of the blond and mysterious Magda, in this capacious apartment upstairs from Cape May’s Pilot House (“Featuring ‘A Stroll Along the Great White Way with Freddy Ayres and Ursula’©!”) on a very special night in August of 1963…

(Newcomers may go here to read the first chapter of this Gold View Award-winning masterpiece, which the noted critic Harold Bloom has called “perhaps the finest memoir available to humanity”.)

She dropped the album cover back on the pile and, putting her cigarette between her lips, which were painted rose red, she put the record on the turntable, turned the machine on, lifted the needle and dropped it onto the record. Soon a pounding African rhythm pulsed through the apartment. She nodded her head and began to shake her shoulders and hands, almost as if she were playing a bongo drum herself.

She turned to me.

She took the cigarette from her mouth.

“Is this too intense for you? I could play something quieter. Perhaps a bossa nova.”

“But you don’t want to dance.”

“No. Dancing should come from the heart. Don’t you agree?”

“So have you never danced?”

“Occasionally I have danced with my mother. And tonight for the first time I danced the Twist, the Mashed Potato, the Frug and the Hully-Gully.”

“I am impressed. Would you like that beer now?”

I glanced back at Josh, lying on the zebra-skin couch among those debauching senior citizens. He still appeared to be out cold.

She set off again across this huge room, and I walked with her. Finally we came to a kitchen off to the left. It was large also, even bigger than Mrs. Biddle’s.

“Sit down at the table."

I pulled up a chair and sat.

The African music was somewhat muted in here, but only somewhat. It was all I could do to prevent myself from modestly playing my own imaginary bongo.

Through tall windows along one side of the kitchen I could see the roofs and chimneys of houses and hotels, the dark ocean, the starry sky.

Magda went to a large white refrigerator with double doors, opened it. I noticed that her dress was slit rather far up one thigh, and I tried not to stare.

“Tell me about this comatose friend of yours,” she said, taking out a pint bottle of Schmidt’s. (I confess that, given the luxuriousness of this enormous apartment, I had been expecting, and hoping for, something more exalted. A Tuborg maybe.)

She closed the refrigerator, then popped the bottle open on an opener built into one of the doors. She brought the bottle over.

It took me a mere second or two to recall what she had asked me about.

She laid the bottle in front of me.

“No thank you,” I said, although I did. But I didn’t want to put her out too much. I sensed somehow that I was already on thin ice with her.

She sat down across from me. She reached over, pulled a purple glass ashtray closer, tapped her cigarette ash into it.

“And what does this Josh do for a living?”

“Is he on a leave of absence as well?” she asked.

“Oh really.” She drew her chair in closer to the table. “Now I am intrigued. I must admit I find you intriguing as well. However, a railway brakeman -- on a mental leave of absence yet -- you know -- a girl should be choosy in her choice of men. Don’t you agree?”

“I can’t live off the benevolence of Freddy and Ursula all my life. It’s time I found a man to take care of me. A rich man. Am I to be despised for thinking thus?”

She stubbed out her cigarette.

“Perhaps you are thinking I should get a job?”

“Oh, no,” I said. “Although you play the piano very well. Maybe you could get a job like Freddy and Ursula --”

“Playing sentimental crap for the yokels, four sets a night, seven nights a week, matinées on Saturdays and Sundays?”

“I should rather die,” she said. “No, some women are not meant to work. This Josh fellow, nice guy?”

“I don’t think he’s married,” I said. “And as far as I know he doesn’t have a girlfriend.”

“I mean does he like to have sexual relations with men?”

“That’s good enough for me. I hope you don’t think me mercenary.”

“Some women are meant to be wives.”

“I said nothing about being a mother.”

“I find children to be quite annoying. If not vile. However, I suppose that spawning is part and parcel of the job, and so I’ll have to have one or two babies at least. I assure you they will have the finest nurses and governesses I can afford. I can do no more.”

“Only doing what’s right,” she said.

(Continued here, and until every last one of those marble notebooks that fill Arnold’s old army footlocker has been faithfully transcribed. Please go to the right hand side of this page to find what might possibly be an up-to-date listing of links to all other available episodes of Arnold Schnabel’s Railroad Train to Heaven™. Be sure to buy your tickets now for the Arnold Schnabel Society’s Annual Summer Solstice Ball at the VFW on Chew Street. Music provided by Rockin’ Harry Hirsch and His Orchestra.)

Now go back and read the chapter above while listening to this:

Wait till Magda learns that Arnold's a poet! Then maybe money won't matter to her so much.
P.S. Are those real zebra skins or clever synthetics?

Heh heh -- I think (I hope) they're clever textiles, Kathleen.

I thought I was falling in love with Magda until that bit about the kids.
Plus I would have expected a Tuborg too, at least.

What can we say, Manny? The chicks dig Arnold.

Better warn Magda that there's no money to be had in a life committed to Josh. I think poverty goes along with it no matter how rich the father.

Jen, I see Arnold as more of an Old Spice Aftershave kinda guy. Or maybe just a splash or two of witch hazel...

Yeah, I agree... just thought maybe it was the Hi Karate that was driving the chicks wild.