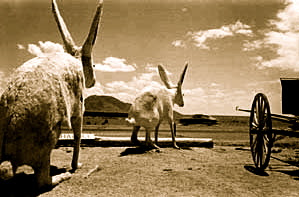 In our previous episode of this unexpurgated edition of Larry Winchester’s sprawling masterpiece, our heroic trio ( the young recently-discharged soldier Harvey and the mysterious and glamorous Dick and Daphne Ridpath) were beset upon by the debased Thorndyke family, who wound up buried in the quicksand of an atomic sinkhole.

It’s September, 1969, a few miles outside a town called Disdain, in New Mexico. The #1 song in the country is “Honky Tonk Women” by the Rolling Stones...

And as our protagonists ride their tired horses back to Big Jake Johnstone’s dude ranch, little do they know they are being watched by the international assassins (and fellow guests at the ranch) Hans Grupler and the woman known only as “Marlene”:

Grupler and Marlene had watched the entire Thorndyke family episode through binoculars from a butte some two miles distant.

“Well,” said Hans, “things are clearing up. We know now they are renegade. That was a US Army truck, albeit somewhat oddly camouflaged. And those soldiers were trying to kill them. If they are worth killing there must be a good reason for it.”

He spoke in the almost-extinct Bavarian village dialect he had spoken as a child and which he had taught Marlene.

“Perhaps they intend to steal an H-bomb from the air force base,” said Marlene, just to add something to the conversation.

“Perhaps. And oh my dear girl what we could do with an H-bomb.”

Not that she really cared so much about the details. She let Hans deal with all the silly intrigue. Marlene was an old-fashioned girl. Just let her know where to point her gun and she was happy.
****

Dick suddenly noticed that there were two holes in the breast pocket of his jacket, where he had put his little Philco transistor radio.

He took the radio out and saw that a rifle bullet had gone clean through it, entering the front at an angle that would have led straight into his right ventricle, but somehow the bullet had taken a left turn through the body of the radio and gone out the thin part on the side, making the second hole in Dick’s pocket.

Dick clicked the little dial, but the radio was dead, killed, kaput.

(Click here for our next thrilling chapter, and kindly turn to the right hand column of this page for links to other episodes of Larry Winchester’s A Town Called Disdain. )
(Special note: this novel, which had its origins in a screenplay Larry originally wrote in 1966, and was all set to direct in Almeyra, Spain, in September of that year  (starring Michael Parks as Harvey, Laurence Harvey as Dick, Julie Christie as Daphne, Slim Pickens as Big Jake, and Gert Frobe and Capucine as Hans Grupler and Marlene) -- a production which sadly was cancelled when Larry's main backer was murdered in a Mafia turf war --  has now reportedly been greenlighted as a major motion picture by a major independent Hollywood production company, and Larry hopes to begin filming this long-delayed labor of love sometime early next year, with exteriors filmed on location in Sonora, Mexico. Nothing is set in stone yet, but the names Pitt, Jolie and Gyllenhaal have been bandied about, and the noted thespian John Goodman was spotted having lunch with Larry recently at Larry's favorite stopping place Musso and Frank's on Hollywood Boulevard. Goodman was later quoted in the Hollywood Reporter as saying he would "kill" for the part of Big Jake. All Hollywood was abuzz the next morning when Cate Blanchett told the good ladies on The View that she would be willing to play the part of Marlene for scale. As of press time the part of Grupler seems to be still up for grabs.)
Posted by Dan Leo at 3:20:00 AM

Dick was taking direction from that radio, wasn't he? First it led him out of Saigon into a pilot-friend's plane headed for San Francisco. Today it saved his life. If I were he--I'd keep it in my pocket whether it could still pick up "Honky Tonk Women" or not.

Yeah, I'd hang on to that radio for dear life.

So, Grupler is not speaking your everyday bairisch, huh? I suppose that Cibrian is a possibility, or perhaps something from the Upper Palitinate. I wouldn't want to suggest that you provide an ISO 639 designation for every dialect you cite, but "inquiring minds want to know."

Kaiser Roll: we're gonna turn this question over to the German-language scholars out there. I suspect that this particular dialect was the one that was still spoken in the German bakeries and butcher shops of the Olney section of Philadelphia as late as the early 1960s.