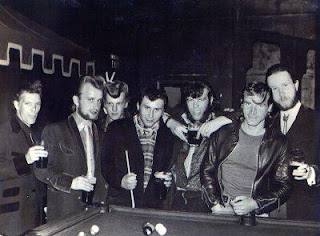 Legendary rockers The Rear Ends had their origins in a Cardinal Dougherty High School skiffle band called The Fag Ends, featuring Tim Dooley (above, second from left) on banjo and vocals, and fraternal twin Tom (second from right) on guitar and sharing the vocal duties. The band went electric in 1963 but took an unplanned detour at the Dougherty prom in 1964 when -- defying the strict injunction of school disciplinarian Father Benonis -- the brothers Dooley were expelled for singing the infamous "dirty" lyrics to "Louie, Louie" ("She my little gal, she waits for me/in a pussy boat on the Zuyder Zee").

Transferring to Olney High, the Dooleys (influenced by R&B giants like "Rockaday Johnnie" and big blues bands like that of "Bum" Stevens) formed a new and powerful ensemble: The Rear Ends, featuring Bobby Fergelman (far left) on drums, Milt Zankowski, Jr (third from left) on bass, Keith Lee Cohen (center) on the Farfisa, Jake (Wolfman) Wolfberg (third from right) on trumpet, and Johnny Martin Smith (far right) on the tenor sax. Tim and Tom continued as the hot combo's frontmen, trading off lead and rhythm guitars and vocals. The group broke big in the summer of '65 when they proved so popular after playing a Tuesday night gig at the Wagner Ballroom on Old York Road that they were rewarded with the Tuesday slot for the rest of the summer, routinely packing the house with over 2,000 sweating frenzied teens. By late August their "street cred" was so profound that they became the first (and only) white band ever to play at the annual Pennypacker Park picnic of the notorious African-American street gang "The Moroccans".

Upon graduating in June of '66 the Dooleys and their fellow Rear Ends went "pro". They continued to play their high-powered brand of R&B, soul, rock, and blues, but now also dived into the viscous swirling mult-colored sea of psychedelia. The Dooleys began to write more and more of their own material, and waxed many great sides for (among other labels) Swan, Atlas, and Lawn. The boys inexplicably never cracked the national Top 100 but had numerous local hits, such as "Journey into Hell", "My Mind Explodes", "The Why is for How", and "A Girl Called No One". Gigging steadily five or six nights a week, in 1967 the boys found time to record (on spec) their one and only album in the basement of the Dooley family rowhome on Nedro Avenue. Entitled "Chronicles of the Wizard of the Mountain of the Time, Vol. I", this visionary suite was never officially released although bootleg copies have been known to sell on eBay for up to $25.

The "classic" era of the band ended in early 1968 when first Tim and then Tom were drafted into the US Army. Upon their discharge in 1971 the brothers reformed the band, but times -- alas -- had changed, and the Rear Ends never regained their former popularity. Tim took a job with the post office and Tom became a bus driver for Septa. However, the brothers continue to gig on weekends as Philadelphia's fabulous and one-and-only Rear Ends to this day, and can be regularly seen at popular watering holes like "The Antelope Lounge" on Cecil B. Moore Avenue, "Shake & Bakespeare's" on Cottman Avenue, and "The Crown & Anchor" on Panama Street.

God I remember these dudes. Saw them in I think '67 opening for Lothar & the Hand People at the Trauma. The Ends blew those fops away!

True, dat, Samson. I recall another gig at the Factory (The REAL Electric Factory, not the ponce pile which currently goes by that sacred name), where the Ends opened for Iscariot's Chariot, an early prog-rock group from Manchester England. The Cahriot ruled but the Ends still blew those limeys off the stage. I recall a particualrly blistering rendition of "A Girl Called No One" with a ten minute solo from Tim that made my neck hairs tingle. Of course I WAS on acid, but so was everyone else. Good times.

Or a Sansom Street block party with among others Woody's Truckstop and Mandrake Memorial. The "Ends" stomped them all into the hot sticky tarmac. I remember suddenly having to vomit and in my vomit I saw all my life that was yet to come. And it all came true.

They were always different depending on the night and the venue. One cold winter night early in '68 I guess, Hecate's Circle in G-Town, they played a two-hour, jazzy set, with a version of Fred Neil's "The Dolphins" that morphed into Coltrane's "Blue Train"...

A vietnam injury was the real reason for the band's decline. Shrapnel blew away Tom's hamstring on the left side and from that time on his left butt cheek started to sag. Malicious little punks in the crowd started to call them the "Half Asses".

The Army awarded Tom the Bronze Star but it was rumored the injury really came from a fragging incident--most likely comrades jealous of Tom's fame.

In the mid Seventies and Eighties Tom could be seen wandering around the streets perpetually drunk muttering "I used to be Somebody."

Well, as Allen Ginsberg put it:
"I saw the best minds of my generation destroyed by
madness, starving hysterical naked,
dragging themselves through the negro streets at
dawn looking for an angry fix,
angelheaded hipsters burning for the ancient
heavenly connection to the starry dynamo in the
machinery of night..."
But, all those rumors aside, Tom seems to be doing fine now. One more year till retirement from Septa and his beloved 47 route. Catch the Rear Ends this Friday night at The Pig and Blanket on the Boulevard and Satyrday night at Row Row Rosie's on the Blackhorse Pike.

Sorry, I misspelled my first name in that previous comment. What was that Mr Ginsberg said about minds?

What? My dear sir, next you'll have me doubting the very authenticity of these voices in my head!

I think it was Lester Bangs in Crawdaddy who described a live performance of the Rear Ends (at the 2nd Fret on Sansom Street if I'm not mistaken, opening for the Velvet Underground) as "PInk Floyd meets Wilson Pickett on really bad acid".

awesome I put-off buying this for months, despite positive reviews. I tried every free weather app going and eventually decided to take the plunge. Glad I did - easily the most customisable weather widget and clock on caftan and the skins are awesome!