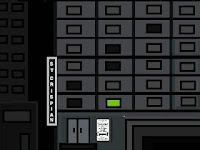 If the Professor had calculated right, Mack should be in New York City, sometime in late September of 1950...

(Click here for the entire thrilling episode!)
Posted by Dan Leo at 5:06:00 PM