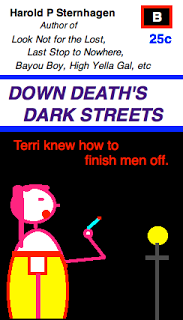 Harold P. Sternhagen (author of A Fine Day For a Lynch Party,  Down Death’s Dark Streets, and Bayou Boy) cleared his throat and then said, or rather almost shouted, as the band was playing very loud, “Excuse me, um, Miss De La Salle?”

Shirley De La Salle looked at him. She’d seen worse, she’d seen lots better. This guy looked like he hadn’t seen daylight in a year. He was thin and his suit was old. A musician? No, he didn’t look hip enough to be a musician.

“You’re excused,” she said, or rather almost shouted, just as Harold had done.

But then Shirley noticed his eyes. She knew those eyes. Gage eyes, maryjane eyes. Reefer eyes. What the hell, maybe he was holding — and something better than that skunkweed Tony and the rest of the band smoked.