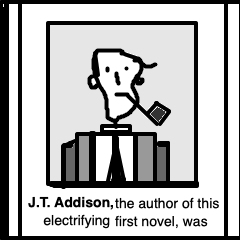 “So, tell me, Murchison,” said Farmer Brown to Addison, “what novels have you written? I should love to read one.”

“’Farmer’, my boy, please, call me ‘Farmer’. That’s what all my buddies call me, and I truly hope that we can be buddies.”

“Okay, ‘Farmer’ – well, as I was starting to say, I have not published any novels as yet, because you see I am still in the process of composing my first novel –”

“And a wonderful novel it’s going to be, I’ll wager!”

“Is it perhaps an autobiographical novel about your wartime service in the parachute factory?”

“Oh, God no. I don’t think I could bear to relive those two-and-a-half long years of grinding tedium, let alone inflict them on the reading public!”

“A tale of a young writer in the big city then, struggling to complete his first novel, the subject of which is a youthful would-be author in the Big Apple, striving to compose his début novel, which is an epic of a young fellow, new to Gotham, and his bohemian adventures as he writes a sort of Bildungsroman about a young lad writing his first novel?”

“I was thinking more in terms of a psychological epic on the order of Proust or Joyce, but in the setting of the American frontier days.”

“Splendid! Now that’s something you don’t read every day, is it?”

“But tell me, Murphyson, just between you and me, and I’m not asking you to give up any trade secrets, but – all that other stuff aside – Proust, Joyce, the Golden West – tell me, what is your book really about?”

“Yes. I mean, don’t a book have to be about something? I mean on a deeper level, you get my drift? What’s its deeper meaning?”

“Okay, let me think about it for a second –”

“You do that, my friend,” said Farmer Brown, and he turned to Milford on his right. “How you doing there, Mimford?”

“How are you doing? I mean really?”

“I’m doing fine, Mr. Brown. I was listening to the music.”

“Ain’t she something, that Shirley De LaSalle?”

Shirley was singing these words:

I’m just a lonely gal
in a lonely town.
All I want is a pal
who won’t mess me around…

“A real peach,” said Farmer Brown, and then he turned back to Addison. “So, what’s your book about, Mulligan?”

“Okay, I think what it’s really about –” said Addison, “I mean, at bottom, what it really deals with – is man’s search for some shred of purpose, some meaning, some ghost of meaning in this dream we call life, in this, this –”

“Do you know what Tommy Eliot once told me?”

“Oh, sorry,” said Farmer Brown, “T.S. Eliot. But that one time I met him he told me to call him Tommy. This was after a few highballs you understand.”

“Oh, yes,” said Farmer Brown. “You see he was in town for a publishing convention which the hotel was hosting, and he and I quaffed a few at this very bar. Really nice fellow, once he had a few under his belt.”

“What was it he told you?” said Addison.

“I had asked him what was The Waste Land all about. That poem was all the rage at the time, and I had attempted to read it. Attempted, because, well, just between you and me and the four walls here, I’m more of a Vachel Lindsay kind of guy. Or Eddie Guest – now there’s a fella who can write a poem! Anyhoo, so I asked ol’ T.S., flat out, just what that darned Waste Land poem meant. ‘C’mom, Tommy boy,’ I says to him, ‘cause by this time I was calling him ‘Tommy Boy’, heh heh, ‘tell me, Tommy boy, from one midwestern lad to another, straight from the hip, what in tarnation was that dang-blasted poem all about?’ And you know what he said?”

“Nope. Ain’t saying that at all. Your book might mean a lot.”

“A heck of a lot,” said Farmer Brown.

Addison was rarely at a loss for words, but at this moment he found nothing within his vast mind worth saying.

Shirley De LaSalle was singing again, coming in after a piano improvisation from Tony Winston:

Yes, I’m just a lonely girl
always wearing a frown
lost in a lonely world
stuck in an unkind town…

Milford was vaguely aware of Farmer Brown and Addison talking nonsense behind his back, but he only had eyes and ears for Shirley De LaSalle. Would she allow him to talk to her on her next break? Would he think of something clever or possibly even endearing to say to her? Would her eyes glaze over in boredom? He knew only one thing: he would write a poem about her, maybe many poems. What else did he have to write poems about? How many poems could anyone write about the meaninglessness of life?

And then Shirley seemed to be looking directly at him, through the clouds of cigarette smoke, as she sang…

I’m just a lonely dame
in a city that knows no shame.
Is there somewhere a lonely guy
who would care for such as I?

{Plese go here to read the “adult comix” version in A Flophouse Is Not a Home, profusely illustrated by the illustrious rhoda penmarq…}
Posted by Dan Leo at 4:17:00 PM