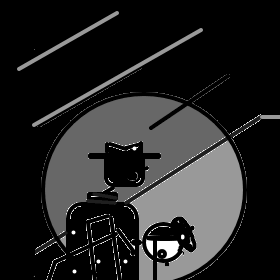 Someone was knocking on Araminta’s door. She had been dreaming, of doughnuts. She was a little girl and she was looking up at her grandmother who was ordering the doughnuts at a glass counter. And then the rapping came, and the warm smell of doughnuts and hot cocoa.

The rapping halted and then came a voice:

“Araminta? Are you awake?”

Araminta cleared her throat and then said:

During one of her trips to the bathroom earlier she had gotten out of her clothes and thrown them on the floor, and then gotten back in bed. Now she sighed, deeply, pushed aside the covers and brought her legs over the side of the bed. Her kimono was draped over the bed’s brass foot rail. Without getting up, she leaned to her side and grabbed the robe, and then without getting up she pulled the kimono on.

“Are you all right, Araminta?” came Gerry’s voice again.

Why was everybody so impatient all the time?

It was only two minutes later when she opened the door.

“I have brought you doughnuts and hot cocoa. The cocoa is still hot and the doughnuts are warm.”

The smell of the doughnuts and hot cocoa, and the warmth.


They sat at her little table in her little kitchenette. The doughnuts had been eaten, the two large Dixie cups of hot cocoa had been drunk, and Gerry had rolled two Bull Durhams, which he now lighted with a paper match. Araminta picked up the matchbook and read the cursive words

The St Crispian Hotel
where the service is swell!
and then she laid the matchbook down.

Gerry looked at his old Hamilton.

“Almost half past two.”

“Good God! Is it still snowing?”

“And yet you went out and got me doughnuts and hot cocoa.”

“I was already out. I was hungry, and had a quite satisfying brunch at Ma’s.”

“What did you have?”

“A double stack of buttermilk pancakes smothered in butter and maple syrup and washed down with copious lashings of Ma’s chicory coffee.”

“You really know how to live, Gerry.”

At some point since Gerry had put her to bed last night Araminta had washed her face, and this was the first time he had ever seen her without lipstick and makeup. She looked younger. Her hair was disordered, but somehow beautifully so. Her neck and collarbone were bare and white. The kimono’s colors were bright and swirling.

“Well,” he said, “I suppose I should be toddling along now.”

“Where are you going?”

“Yes. Maybe I can squeeze out a sentence.”

“Maybe it won’t be a bad sentence.”

“I’m not so sure, but I’ll try to squeeze out a sentence anyway.”

“It sounds as if you’re speaking of going to the bathroom.”

“It’s a not dissimilar process.”

“Did we do anything last night?”

“We did nothing but talk. And drink. And eat. And talk.”

“I successfully got you into your bed, yes.”

“Did you get fresh with me?”

“I want to thank you for that.”

“Terry came knocking at my door this morning.”

“I made him go away. I had drunk far too much last night to deal with him. I think he was miffed.”

“I suppose he will. Should I tell him I got drunk with you?”

“But you’re a philosopher. You’re supposed to know things.”

“I am a philosopher who doesn’t know things.”

She turned and gazed toward the window, which was coated with snow, but some soft light came through.

“No one should drink like that every night. Even me.”

“But I wouldn’t not have done it, Gerry.”

“I wish I could remember what happened after we left that Kettle of Fish place.”

“Nothing much. I found us a cab, the cab took us home, I got you upstairs and into your bed.”

Araminta had kissed him in the cab, and said that she loved him, but Gerry wasn’t going to tell her any of that. He would keep that for himself.

{Kindly go here to read the “adult comix” version in A Flophouse Is Not a Home, profusely illustrated by the illustrious rhoda penmarq…}
Posted by Dan Leo at 10:04:00 AM