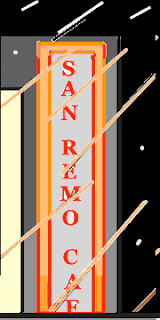 It was four flights down from her little apartment, and outside the snow still fell on Bleecker Street, thick fat flakes falling relentlessly, and the sidewalk and the parked cars had been blanketed with an inch more of the white stuff in the half hour that Addison and Bubbles had been upstairs.

“Jesus, I should’ve worn my galoshes,” she said.

“Do you want to go back and put them on?” said Addison.

“No, we’re only going up the block,” she said, “but keep that umbrella over me.”

She put her arm in his, and off they went, back towards the San Remo on the corner.

How odd, thought Addison, to be walking arm in arm with a woman, and it occurred to him that before this night he had never walked with a woman’s arm in his unless the arm belonged to one of the elder females in his family – his mother, one of his grandmothers or aunts or great aunts. Bubbles had her arm in his right arm, the one that held the umbrella, and it was slightly awkward trying to keep the umbrella over her head with its red fur (or was it faux fur) pillbox hat and her somewhat broad shoulders in their black fur (probably not real fur) coat. Could this be the beginning of a new chapter in his life? Or could it possibly even be the first chapter of a whole new volume in the heretofore dreary and tedious roman fleuve of his personal history? A volume in which our hero finally experienced social relations not only with women who were not related to him by blood, but indeed sexual and, yes, even romantic relations? True, he had had to pay three dollars for the “Baltimore handshake” Bubbles had just given him, and had also agreed to buy her an unspecified number of cocktails at the San Remo, but did these transactional factors preclude a deeper friendship, or any sort of friendship?

“You’re awfully quiet all of a sudden,” she said.

“Yes, I was only musing, Bubbles. You see, I was pondering, oh, perhaps unjustifiably, I’ll readily admit, but, yes, I was wondering, you see –”

“Okay, we’re here,” she said. They had reached the entrance to the San Remo, its tall neon sign overhead tinting the falling snow orange red. “Now listen, we can sit together and have a good time and all, but if I give you the high sign, you’ve got to act like we don’t really know each other.”

“I won’t hurt you. Just a little pinch, and then you act like we’re not together.”

“Why do you think? I got to try to make a little dough. How far do you think that three bucks you gave me is gonna get me?”

“If you had gone for the sawbuck for a throw it might be a little different.”

“But no, you had to be a cheapskate. Wouldn’t even cough up a fin for a BJ.”

“All right then, long as you understand.”

“Okay, now that we got that settled, let’s go in.”

She tugged on his arm, but Addison stood there.  “Come on, buddy, what’s the hold-up?”

“That’s what they call me.”

“What if we just sat together, had some cocktails, perhaps even a bite to eat, and if we just, you know, if you didn’t have to give me the ‘high sign’ –”

“But I told you, I want to make a little money tonight. I got rent to pay too, y’know.”

“Yes, but, what if I buy you drinks and dinner, and then whatever money I have left over, you can have that?”

“So how much money do you have left on you? Fifteen bucks?”

“Yes, fifteen, but I also have some change. Maybe fifty cents.”

“So you want to have like a date with me?”

“If it isn’t asking too much.”

“But you told me you had your rent coming up.”

“I was fibbing actually. My rent is paid through the month. And usually I get something from one of my aunts or great aunts or my mother or one of my grandmothers every week or so.”

“Your aunts and mother and great aunts and grandmothers send you money?”

“Not a lot. A ten here, five there. Maybe a twenty for Christmas or my birthday.”

“And you live off this money the ladies in your family send you.”

“I live very modestly. I hardly eat, and normally I drink at this place called Bob’s Bowery Bar, where you can get a glass of very good basement-brewed bock for a dime.”

“As well you should!”

“They got a good cheap spaghetti dinner in this joint. It comes with salad and Italian roll. Will you buy me one of those?”

She paused, looking away. The snow falling all around her, the snow tinted orange red by the neon sign, made the skin of her face look like a lady in a Renaissance painting Addison had once seen at the Metropolitan Museum. Was it a Botticelli? Or a Perino del Vaga?

“All right,” she said. “But you have to eat some spaghetti too. I’m not gonna sit there and eat while you sit there staring at me like a sad hungry puppy.”

“I should love to eat some spaghetti,” said Addison.

And so they went back into the warm and crowded and noisy bar. Addison realized that unless he got an envelope from home in the next morning’s post that he might not be able to eat tomorrow, not to mention having any bocks at all at Bob’s, but all that was in the future, and this was now.

{Please go here to read the “adult comix” version in A Flophouse Is Not a Home, profusely illustrated by the illustrious rhoda penmarq…}
Posted by Dan Leo at 11:27:00 AM