“Are You a Drunkard?” 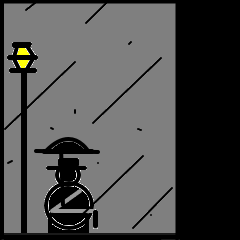 Quickly, like unto the hot wind that blows up through the thirsty canyons of the badlands in August, Buck ducked behind the corner of the Penultimate Chance Saloon as the storm of hot lead buzzed past like a cloud of enraged hornets, and, drawing both his Colts with lightning-speed celerity, he

The little alarm clock to Addison’s right rang and rattled, and he depressed its button, sighing with satisfaction at another day’s good work done.

When Addison had first started his western epic (Sixguns to El Paso) a month or so ago he had worked to no particular schedule or quota, sometimes producing as much as fifty pages in a day, sometimes only a few words, sometimes laboring for several hours, sometimes giving up after a few minutes, but a couple of weeks ago he had hit on the idea of setting his alarm for one hour’s time, and he would cease work on the dot of sixty minutes even if, as today, he were in the midst of a sentence. He left the sheet of paper in his trusty old Olivetti portable (the same machine his grandmother had given him when he went off to his freshman year at Swarthmore), all the better to resume work on the morrow. As usual he had no idea what would happen next in his novel, but he trusted as always to his native genius. Something would come to him, just as something had come to him for the past two hundred and sixty-eight pages.

Addison stubbed out his latest Herbert Tareyton. Now for his reward! A nice cold glass of bock around the corner at Bob’s. His good friend Gerry (“the Brain”) Goldsmith would no doubt be there, and would be glad to hear that Addison continued to make good progress on the book. Maybe Gerry would even buy him a shot of Cream of Kentucky.

The roar of the Third Avenue Elevated resounded through Addison’s tiny apartment, and he looked out the window. Evening was falling, the street lights had come on, and falling rain sparkled through the air of the Bowery.

In a matter of moments Addison had donned his old Burberry trench coat (thanks again to Grandmother, his Swarthmore graduation present, and it still fit him, thanks in large part to his mostly liquid diet), put his hat on his narrow head, grabbed his umbrella, and was out the door and tripping lightly down the four flights to Bleecker Street.

Addison turned left at the entrance of his tenement (oh, how he longed to leave this neighborhood, and he had his eye on Sutton Place just as soon as he got his advance on his novel) and headed briskly through the rain to the nearby corner of the Bowery, when who should he see standing there but that fellow Smiling Jack, standing there smiling under his own dripping umbrella.

“Smiling Jack, what are you doing standing here on the corner in this pissing rain?”

“Pamphlets? What sort of pamphlets?”

“Oh, just a little something I wrote.”

Smiling Jack had a leather satchel hanging from a strap across his chest, and he reached under its flap with his free hand and bought out a slim little stapled booklet.

“Here, buddy, got one just for you, entirely free, gratis and for nothing.”

Addison took the little book of pulp paper, and tilting his umbrella to let in some of the corner street lamp’s light, he read the title on the cover:

ARE YOU A DRUNKARD?

Under the title and byline was a crude drawing of a man leaning sloppily against a lamp post and holding a bottle.

“Go ahead,” said Smiling Jack, smiling, “open it up, buddy!”

Addison opened the booklet and read:


HOW TO TELL IF YOU ARE A DRUNK


Do you wake up hungover every day?

Do you commonly drink till you vomit, and then just keep drinking?

Do you wake up in the drunk tank at least once a month?

Does everyone hate you unless they are drunks too?

Do you hate yourself and your whole miserable life?

Do you wish you were dead, and often entertain thoughts of suicide?

And then do you just take another drink?

Well, friend, guess what, you are a drunk!

However, there is hope for you…

“Yeah, what do you think? Is my grammar okay? You’re a writer, so please be honest.”

“Uh, yes, I’ve only read the first several sentences, but so far I should say your grammar is unimpeachable, Jack.”

“Well, tell you what, Jack, since it’s raining, and cold, let me save this, and I shall read it just as soon as I get indoors.”

“Oh, okay,” said Smiling Jack. “Where are you headed?”

“Well, I was just popping over to Bob’s, actually.”

“Weren’t you listening at the meeting, Addison? People, places, things! Places. Places like bars. Where they serve alcohol.”

“But, Addison, you must be strong! Come with me, we’ll have a cup of coffee in Ma’s Diner, and then we’ll head over to Old St. Pat’s basement for a meeting.”

“No, not even one, Addison! It’s a slippery slope.”

“Addison, you must fight the urge!”

“But I might not have any more than a couple, maybe three, or –”

“No, no, my friend! Come with me for some coffee and pie, and then we’ll head down to the meeting.”

“I’m really not in the mood for a coffee right now.”

“I’m afraid I don’t much care for pie unless I’m having coffee.”

“Why not? New York is beautiful in the rain!”

“But what about your pamphlets?”

“We can distribute them as we walk. You can help me.”

Damn Smiling Jack! There was Bob’s just a scant dozen paces away, and yet it might as well be across the Atlantic Ocean.

“It’s the last thing you need, buddy. Take it from one what knows. One what destroyed his life.”

“Let me walk with you, buddy.”

“To examine yourself and your conscience. To take stock and moral inventory.”

“You do that, Addison. And take my advice: eight o’clock tonight, Old St. Pat’s basement. A meeting. I’ll be there, and I hope you will too.”

“I will. Try that is. But I might just take a really long walk.”

“It’s cold though. You might want to head to Old St. Pat’s after a while just to get in out of the cold and wet.”

“I well might, Jack. Good luck with your pamphlets.”

“Thank you. And I hope you’ll read your pamphlet.”

“Let me know if the grammar and the spelling are okay.”

He turned and headed back down Bleecker, slipping the pamphlet into the pocket of his trench coat. He didn’t dare to turn until he reached the corner of Lafayette, and when he did he saw the dark squat figure of Smiling Jack, still standing under his umbrella down there on the corner of Bleecker and the Bowery. Addison kept walking for another half-dozen blocks or so until he reached a sign heralding the “San Remo Café”. He had never been in the place before, he never went anywhere except for Bob’s Bowery Bar, but presumably they served alcoholic beverages here, even if they wouldn’t be the delicious basement-brewed bocks over at Bob’s, so Addison closed up his umbrella and went in through the open door to the smoky crowded room full of happy drinking revelers…

“And that,” said Addison, glancing from Araminta to Gerry, “is how I came to be here. And who should I find but you two lovely people?”


Back at the northwest corner of Bleecker and the Bowery, Smiling Jack still stood in the rain under his dripping old umbrella, a booklet in his hand.

A small scruffy fellow carrying an even more ancient and tattered umbrella came across Bleecker Street. He wore an old grey overcoat, with a cloth cap and thick eyeglasses, and he had a cigar in his mouth.

“Care to take a pamphlet, friend?” said Smiling Jack, smiling. “It just might save your life.”

He took the pamphlet, shoved it in the pocket of his coat, and headed on to the neon-lit entrance of Bob’s Bowery Bar.

{Kindly go here to read the “adult comix” version in A Flophouse Is Not a Home, profusely illustrated by the illustrious rhoda penmarq…}
Posted by Dan Leo at 12:05:00 PM