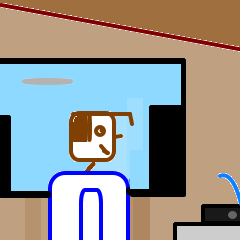 Gerry “The Brain” Goldsmith stared at the sentence he had just typed. It had taken him all afternoon to come up with the sentence, but, hang it all, it was a good one!

His work-in-progress (currently titled Pensées for a Rainy Day; Volume One) was coming along apace. Almost ninety-two double-spaced pages completed in just over a year and a half, ever since he had decided to get serious about distilling the work of two decades of ruminations collected in those stacks of schoolboy copybooks piled on his shelves. It was true that he only averaged one completed sentence a day (Saturdays and Sundays off), but Gerry firmly believed that it was far better to write one good sentence than ten pages of nonsense.

For a few brief seconds he considered moving on to the next sentence, but quickly decided not to push it. Always leave some gas in the tank for the next day’s work, that was Gerry’s motto, or one of them.

As usual he left the page in his old Royal portable, one of his little methods for achieving a continuity from one day’s labor to the next.

Outside his window the Third Avenue El roared and rumbled on its way to the Houston Street stop.

Gerry leisurely rolled another Bull Durham, and then lighted it with a Blue Tip kitchen match.

Soon he would have his reward for his day’s work: a glass of the delicious basement-brewed bock around the corner at Bob’s Bowery bar. And after that glass, another, and so on…

Yes, his days held little apparent variety, but what was so great about variety? A philosopher (a man of letters, yes, say it, an artist) needed stability, a routine, and not to be running around madly all day and night. And, after all, didn’t each day bring something new, if only you kept your eyes and your ears and your mind open?

He gazed at his day’s production again.

His youthful two post-collegiate years in Paris, living off his Harvard graduation money and his fifty-dollars-a-month remittance courtesy of Grandmother Goldsmith, that glorious time of – but, wait, had it really been all that glorious? No, let’s face it, he had been a shy young man, and he would go days at a time without speaking to anyone but a waiter, requesting another glass of wine or beer.

That first summer, sitting in the cafés, watching les jeunes filles stroll by. Why had he never attempted even once to pick one up? Well, it was too late now, and, really, what had he missed? He would never know of course, but, after all, who’s to say that even if he had had an affair, even once, if it would have been a good memory to have? And he was only forty-nine now after all, he still had time, perhaps, to have concupiscent relations with a woman, at least once, before he died.

No doubt when his book came out his publisher (he had his eye on Smythe & Son, although he had not yet approached that august firm) would arrange a “release party” for him. For once in his life he would be the center of attention, and perhaps a likely bookish woman would approach him, a copy of his volume in hand, requesting a personalized inscription. One thing would lead to another. She wouldn’t mind his pot belly, because she would be attracted to his mind…

Anyway, time for a bock!

Gerry put on his tie and his old Donegal tweed suit coat and his fedora, and left his tiny flat, not bothering to lock the door, as usual.

Gerry lived on the sixth floor, and he was just about to turn down the fourth-floor landing when he heard the scream.

Again the scream, a woman’s scream.

Good God, was someone being murdered?

The noise came from behind him.

He turned, his head cocked, listening, and the scream sounded again. It seemed to be coming from the door one down to the left. That was the apartment of that nice young fellow Terry Foley. Could it be that Terry was in fact a murderer? Who would have suspected? Terry was another literary fellow, working on a long autobiographical novel (or so he said), but was he in reality a modern-day Raskolnikov?

Again the scream, a scream. Frightening.

Gerry was no hero, but could he just continue on down to the bar while some poor woman was being butchered?

No. If only for once in his life, he must take action in the physical world.

He walked, legs trembling, over to the door as yet another scream rang out.

He raised his fist, took a deep breath, and then pounded on the door with the heel of his hand.

A scream had just started again, but suddenly it halted, almost as if the woman had had her throat slit, or crushed.

“Yes, who is it?” called a man’s voice, Terry Foley’s voice.

“It’s Gerry Goldsmith, Terry,” said Gerry, into the wood of the door. “I can hear you in there, and I warn you, I am not afraid to go find a policeman!”

“What the devil are you talking about?” said Terry’s voice.

“You know damned well what I’m talking about, Terry, and I’m not leaving here until you open up and let that woman out of there, provided she is still alive.”

“Are you insane, Gerry?”

“I assure you I am quite sane, Terry, but perhaps the more apposite question is, ‘Are you a homicidal maniac, Terry?’”

“You heard me, man. Now open this door at once!”

Gerry heard padding footsteps. Would Terry have a knife, or a gun? Would he, Gerry, pay for being a good Samaritan by becoming Terry’s next victim?

The door opened a few inches.

Gerry could see thin young Terry standing there, clad only in boxer shorts. Behind him in Terry’s bed with the sheet drawn up to her neck lay young Araminta Sauvage, from down on the second floor. She was lighting a cigarette.

“Jesus Christ, man,” said Terry. “You scared the shit out of us.”

“I am so terribly sorry.”

“Hello, Miss Sauvage,” said Gerry. “I am so terribly sorry.”

“Can you both please forgive me?” said Gerry.

“Can I close the door now?” said Terry.

{Please go here to read the “adult comix” version in A Flophouse Is Not a Home, illustrated by the illustrious rhoda penmarq…}
Posted by Dan Leo at 9:08:00 AM