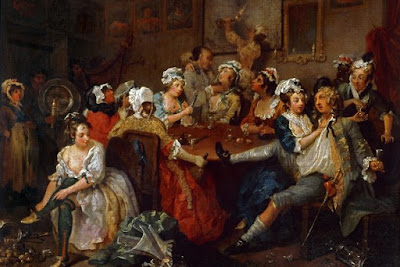 For a couple of months now, ever since Pete Willingham had gotten out of Bellevue from his most recent commitment, and ever since Bob had given him provisional permission to come back into the bar, Pete had been obeying Bob’s injunction not to bother anybody, and not to butt into people’s conversations with his opinions. Instead he spent his time in the bar nursing a bock beer and scribbling away in schoolboy marble copybooks. He wrote with a No. 2 pencil, and he had a metal pencil sharpener with which he would sharpen his pencil, letting the shavings fall to the sawdust-covered floor.

All the regulars at the bar speculated about what it was that goofy Pete was writing, but, remembering how overbearing and obnoxious Pete had been before his reformation, they were all reluctant to engage Pete in conversation.

“Sure I’d like to know what the little fella’s writin’,” said Seamas, the Irish poet. “But I’m afraid of opening up Pandora’s box.”

“You watch your language, Mick,” said fat Angie, the retired whore. “I may be a retired whore, but I ain’t puttin’ up with that vulgar kind of talk.”

“Don’t make me smack you with my purse, Paddy,” said Angie. “This is your last warnin’ about that kinda talk.”

Seamas sighed, and silently admitted defeat. He had gotten his own last warning from Bob, and he didn’t want to press his luck.

“I have to know,” said the Brain, after one of those echoing awful pauses of silence in the little world of Bob’s Bowery Bar. “I’m going to ask him.”

And so it came to be that on this fine summer day the Brain sidled down to the end of the bar where Pete Willingham sat quietly scribbling in his copybook, and he popped the question.

“Yeah. When I was in Bellevue this last time, as part of our group therapy that playwright guy Artemis Boldwater come in, and he worked with the doctor on this type o’ therapy called ‘role play’. We would take turns pretending we was somebody else, like sometimes we pretended to be one of the other patients, or maybe we’d be another patient’s mom or dad, or his boss or wife, something like that there. And Mr. Boldwater told us how he wrote his own plays, by like putting himself inside other people’s heads. It was very helpful, Brain.”

“Imagine how I felt when I pretended to be some guy at a bar, and one of the other patients pretended to be me, all obnoxious and opinionated and not letting the other guy talk for even a minute without interruptin’ him.”

“He said, ‘Sure, Pete, I’d be glad to read a play you wrote.’ So that’s what I been doing, writing a play, Brain. I got a book that Mr. Boldwater recommended on how to write plays, and I took his recommendation to write what I know, and I been writing this play and I’m almost finished.”

And Pete returned to scribbling in his copybook with his No. 2 pencil.

The Brain went back to his stool at the other end of the bar, and all the gang had a good chuckle when he told them what Pete was writing, but the joke was on them when, six months later, Drunk Tank opened at Artemis Boldwater’s Demotic Theatre, as part of its government-funded “Emerging Voices” program, with the noted actor Angus Strongbow in the lead role of “Pete Cunningham, habitual drunkard and loudmouth”.

“Raw truth,” was the verdict of The Federal Democrat.